Q&A: Gaia on street art, authenticity and his mural at Center for Civil and Human Rights

Gaia’s piece, #IfTheyGunnedMeDown, is inspired by the eponymous Twitter hashtag Mississippi attorney C. J. Lawrence created after seeing the negative representations of Ferguson teen Michael Brown in the media and wondering how the media would portray him. The handle, which questions the media’s role in perpetuating racial stereotypes, exploded into an online social media movement.

Gaia’s paintings intermingles images taken from photographs found on social media with depictions of the ruins of Persepolis and the Cyrus Cylinder, which some believe contained an inscription of the very first charter on human rights. The exhibition runs through May 3.

We caught up with him at the center to talk about street art, activism and the role mural painting plays in developing community, visual literacy and social awareness. 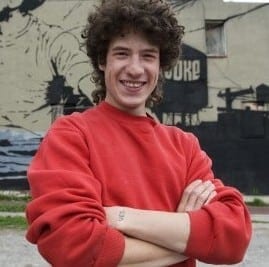 ArtsATL: You’ve received a lot of attention lately for your work, most notably in Forbes magazine where you were featured as one of its 30 Under 30 artists to watch. How does that sit with you as a street artist?

Gaia: At 26, I’m not very old [laughter] and haven’t made very many ideological decisions about where I stand on such issues. Any institution is going to have a board that might be questionable to some people. For example, we’re on Coca-Cola’s land right now at the Center for Civil and Human Rights, and Coca-Cola has some questionable human rights issues. But I also believe in a reallocation of resources. It may be super naïve, but if I’ve been given this opportunity to speak, I might as well speak well.

ArtsATL: Where do you draw the line between graffiti art and street art? How do they compare culturally and in terms of affect and legibility to the general public?

Gaia: Graffiti started as one thing, now it’s something else. What it is today is a written codified language intended for [other graffiti artists]. It is a language that people are not supposed to understand per se unless you make an active effort to learn that culture. 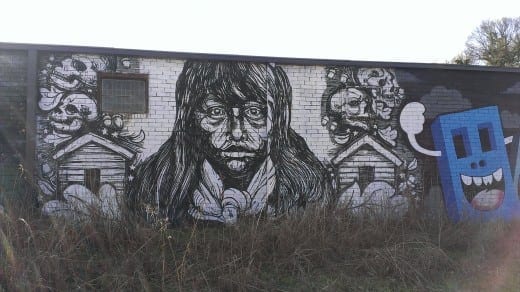 Detail of Living Walls mural Sunrise Over Edgewood by Gaia and Nanook, at 442 Edgewood Avenue.

Street art is anything else that happens in the street that is intended for an audience that is not just its own subculture. That, of course, brings up the main issue of visual literacy, and that’s something that happens at this institution. You have a bunch of school kids come. The docent or education coordinator will go through the visual elements of the piece and deconstruct from a formal perspective. That’s an effort of building visual literacy.

I wouldn’t hand someone Moby Dick if they can’t read and say, “Check out this book. It’s a classic. Read it and get back to me. It’s going to change your life.” If you can’t read, it’s a piece of toilet paper. That’s exactly the same with a lot of my pieces. I’ve got these crazy highfalutin art historical references going on because I want to say that the work is more important that just a “fun, fresh pizza on a skateboard moment” [laughter]. I think there’s something more to be talked about.

ArtsATL: Many consider painting to be passive — the opposite of other contemporary innovative forms that appeal to a mainstream need for a more interactive and sensory stimulation. How does painting contribute to political dialogue, social activism and change, awareness raising, etc.?

Gaia: Anything that is useless is emancipated from the pressure of being useful. But, however you think about it, contemplation is important. I’m not here to develop solutions, I’m here to explore visual culture, and especially now with the advent of social media, things have become extremely visual. They’ve almost become re-visualized.

The death of painting is real insofar that its apparent cultural relevance is in the art market. But at the same time, mural painting is a chance encounter with a visual experience that can be surprising, or an interesting moment in an urban and/or lived landscape. It can be a moment of building consensus, but it can also be totally off the mark, or extremely agonistic. I definitely take an agonistic, democratic approach, not shying away from difference or difficult issues, and wanting to think about things cathartically in order to develop a measure of contemporary provisional solutions. It’s basically holding a conversation in a visual fashion so that provisional powers and provisional solutions can eventually unfold. 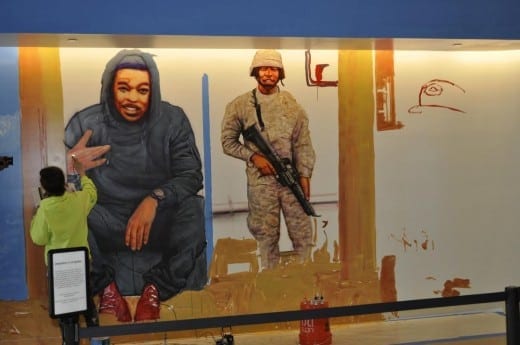 Gaia at work on his mural. Courtesy Center for Civil and Human Rights.

ArtsATL: How do you maintain artistic integrity and sense of self as someone who now has to work in negotiation with the general public, organizations, institutions, etc., who all have a certain expectation of what you’ll produce?

Gaia: As a street artist, there’s this sincere craving for being hard-core that is just crazy, where you’re denying yourself certain opportunities, because once you let yourself be something you think that you’re not, you become everything and that is like staring death in the face.

Living Walls, for example, is a bunch of people who started a grassroots effort and were used to working unilaterally. They were used to not asking for permission and using their conscience to say something of import, whatever it was they decided they needed to express, in generally fallow spaces. But once you have a couple years of producing murals, and producing 40 to 50 murals over the course of five years, then you’ve become an institution. So you actually do have to work multilaterally. Sometimes people don’t even care about what it is you want to paint. It doesn’t even come down to that. It’s just “Did you get the proper permission?”

And you’ve got to be ready for someone to say no, and the more projects you do, the easier that becomes. When you’re just beginning, you’re like, “But that was my vision! And I spent so much time trying to create it! And I’m going to be left in the dust and all these guys I’m competing with on the mural circuit are going to surpass me.” So working multilaterally and asking permission comes back to this moment of authenticity insofar that it’s like, yes, I’m a painter but I have to be ready to become something different given these obstacles.

ArtsATL: How do you define authenticity?

Gaia: I want to admit to things people aren’t willing to admit because they fear they won’t be taken seriously. I’m not afraid to admit that I’m from the Upper East Side [of Manhattan]. Just because I do does not mean I will suddenly become unreal or exposed.

The work is not design. I’m not here to be part of policy. For me, authenticity is the willingness to engage in a visual and shared cultural language and tradition that feels intrinsic to identity. And of course, identity is the construction of boundaries of your community. And the ultimate problem of community art is that it can never be entirely inclusive, because if it tries too hard to be too inclusive it generally ends up looking a little Kumbaya. 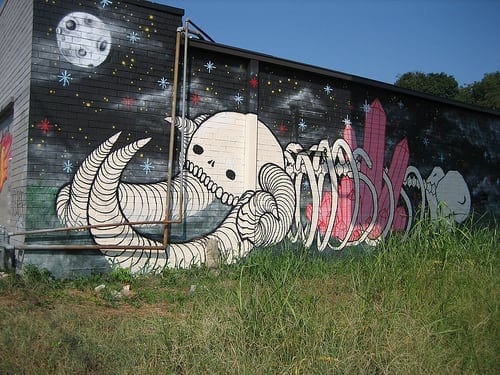 A mural Gaia created with Swampy and Greg Mike at 902 DeKalb Avenue under the auspices of Living Walls.

I think a lot of contemporary muralists are coming from a standpoint that we understand the inherent exclusivity of the practice, and we try to not exactly deny that, but that doesn’t mean that we can’t try to at least also cross boundaries. That’s why I’m so happy about being a street artist. When I’m giving lectures, I usually talk about how strange and amazing it is to be a street artist because I can go to west Baltimore as a white guy who is 115 pounds, and put up work and it becomes this excuse to have a conversation.

That’s not going to solve anything, but at the same time it makes me feel human. We’re so often spatially prevented from communicating with one another through the ways cities are built and who has access to what spaces, etc. So street art does become this excuse to cross boundaries. From that standpoint, a mural should help break down boundaries and/or identify the naturalized boundaries so that they become unnatural. The things that we think actually define us become loose and weak.

But you know, you know you’re in the hood when you start seeing murals. Also you know when you’re going into a neighborhood that’s gentrified when you start seeing murals. Those are different kinds of murals. Unfortunately a lot of mural makers don’t care about that history. All they care about is going to Vienna and getting published in Juxtapoz. And unless you’re BLU, it’s harder to get the more thoughtful stuff to be viral. 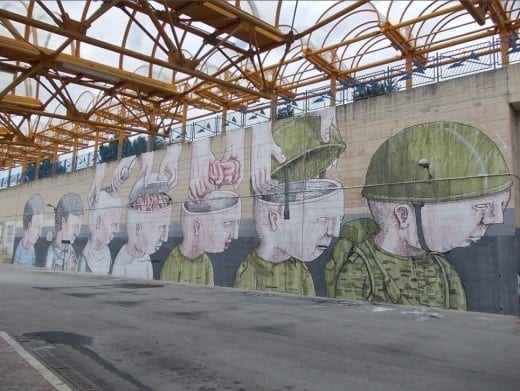 ArtsATL: What is “Gaia” and how’d you pick it?

Gaia: Gaia is mother of Earth in Greek mythology. I was very lucky as a high school student to choose that instead of something stupid [laughter]. It’s also a hypothesis by a scientist named James Lovelock who postulated that the Earth is a living organism with its own intelligence and we have become a virus that has destroyed the balance. So the Earth is basically creating a “cold,” which is global warming, to eradicate us so that order can be established again.