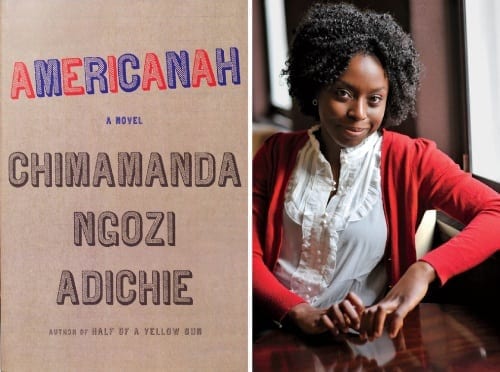 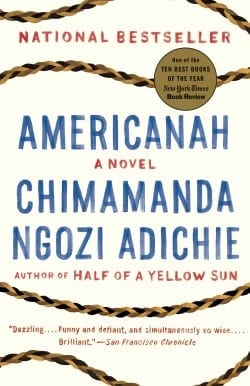 Chimamanda Ngozi Adichie is a veteran at unearthing tales most would prefer remain buried. Purple Hibiscus, her debut novel and Hurston/Wright Legacy Award winner, delved into the seamier side of one “perfect” Nigerian family. Her second novel, the Orange Prize–winning Half of a Yellow Sun, clawed open the Biafran War of Independence and the meaning of nationalism, sovereignty and failure.

Adichie’s third novel, Americanah, is a searing exploration of race relations in America as well as a tender love story. Nigerian-born and raised, Ifemula and her lover Obinze both leave Nigeria — he to the U.K., where he struggles; she to the U.S., where she eventually begins to write a wildly successful and candid blog that chronicles the African American and American African, i.e., a slave descendant’s narrative versus an immigrant’s narrative.

In choosing to tell the state of the races through Ifemula’s personal blogs, Adichie adroitly avoids being didactic even as she regales the reader with delightfully razor-sharp sermons. As such, Americanah is an eye-opening look at the meaning of love, luck, forbearance, inequality and the shades of life determined by the color of one’s skin and the origin of one’s birth.

Chimamanda Ngozi Adichie spoke to ArtsATL from Nigeria. She will appear at the First Baptist Church of Decatur at 7 p.m. on March 6.

ArtsATL: How did you get the idea for Americanah?

Chimamanda Ngozi Adichie: When people think of African immigrants, they immediately think of poverty. I wanted to write about the type of immigration I am familiar with, an immigration of people who are not starving, who are middle class, who choose to leave because they want more choices.

ArtsATL: What does the title mean exactly and when did you decide on it?

Adichie: I decided fairly early on and by the end of the book I wanted to change the title to something more flowery, but my editor disagreed, which was probably a good thing. Americanah is a word in Nigeria referring to people who pretend to be Americanized or have been Americanized.

ArtsATL: The novel is funny and witty. For instance, Ifemula writes in her Nigerian blog, “If your cook cannot make the perfect Panini, it is not because he is stupid. It is because Nigeria is not a nation of sandwich-eating people.” You address so many serious issues — race, class, gender, inequality. Was channeling them through humor a deliberate decision?

Adichie: The humor was deliberate in the sense that sometimes the most absurd thing about the way the world functions turns out to be incredibly funny, and when you’re writing about serious topics humor becomes a way not just for the reader but also the writer to get into it. My use of humor was not to suggest a lack of serious intent, because I knew I was writing about things which are completely serious, but, at the same time, I do think it is possible to write about serious issues and also to laugh at them.

ArtsATL: Ifemula explores race and identity through her love for a white American, an African American and a Nigerian. Did you always know where Ifemula’s heart lay?

Adichie: I always knew where Ifemula’s heart lay, but I didn’t know where the novel was going to end. I wanted to write an old-fashioned love story, and I joke about how I was inspired by all the Mills & Boons novels I read when I was growing up. 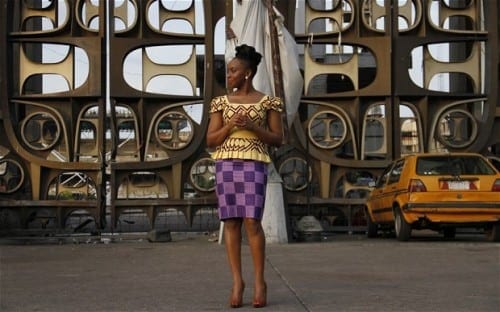 The author in Lagos, Nigeria.

ArtsATL: In another blog post, Ifemula tells Africans in America, “You are black. Even if you weren’t black in your own country.” She also succinctly traces the two different histories when she tells another character, “Maybe when the African-American’s father was not allowed to vote because he was black, the Ugandan’s father was running for parliament or studying at Oxford.” What do American Africans and African Americans share, other than what the predominant culture would like them to share?

Adichie: I think what they share is historical, because African American history did not start with slave ships but, as we see in slave narratives, in Africa, and in the memories which were then passed down from generation to generation. Sometimes reading or learning about a black family in the South seems very similar to a family in my ancestral hometown in Nigeria.

ArtsATL: Do you think you would have written Americanah if you were African American?

ArtsATL: What has the reception to Americanah been?

ArtsATL: You actually do look very critically at Nigeria in the novel, but this reminds me of Ifemula noticing that liberal Americans criticize America yet do not like others to do so.

Adichie: There are also the African Americans who say to me that I’ve said the things they say when the doors are closed, and they don’t know whether to be happy or angry with me. One African American woman said, “Thank you for telling our stories,” and “I hope you know you are not going to win any more prizes,” which I found very funny. Also I thought it was such a compliment in that she was saying, “You’ve told the truth, truths no one wants to hear, and so that’s it for accolades.” Black women also respond to the “hair” part of the book and they think that, for once, finally hair is being talked about.

ArtsATL: Ifemula sets the score straight on many things, such as V. S. Naipaul’s identity issues, cultural differences in child-rearing, glorifying poverty and the role of Hispanics and Jews in American culture. Is there anything Ifemula does not have an opinion on?

Adichie: Ifemula does have an opinion on everything and why shouldn’t she be like that? I wanted her to be like that. I admire her very much.

ArtsATL: She is a wonderful creation, but I was just wondering whether it’s perhaps easier for her to occupy all the spaces she does within the world of the novel than if she were actually in the world.

Adichie: That is true. I think that’s fair.

ArtsATL: President’s Obama’s election is an important part of the novel. In his 1995 memoir, Dreams from My Father, he very much straddles an American African as well as African American sensibility. What is his role in the novel? What does he represent for you?

Adichie: I was not in the U.S. — I was in Nigeria during the presidential election — but everybody was watching, and in the novel, I wanted to try and capture that period of incredible euphoria.

ArtsATL: I think Obama winning the election cut across cultural and racial barriers when it came to being an emotional moment.

Adichie: I think so, too. What it meant for me personally — and this is something I use in the novel — I remember watching and being very moved, but then I really didn’t get very emotional until my nephew, who is American-born, sent me a text saying, “I can’t believe my president is black like me.” I hadn’t quite realized that my nephew was aware of race, if that makes sense, and it broke my heart in a way because I thought, “Oh my God, this means so much to this child,” and then I started to cry.

ArtsATL: Do you think any gender has it easier in immigrating and assimilating?

Adichie: I think the major difference between Obinze’s and Ifemula’s experiences is that she was documented and he was not.

ArtsATL: And how much of a role does class disparity play?

Adichie: A huge role. Obinze had somewhere to go back to from the U.K. He’s able to say, “I want my dignity and I want to go home.” Many people don’t have that option.

ArtsATL: In your 2012 Commonwealth Lecture, you quote W. E. B. Du Bois saying, “All art is propaganda.” Isn’t just the act of writing political? Is Ifemula’s blog propaganda? Is Americanah?

Adichie: In that quote propaganda does not have the negative connotations it does today. Rather it means that everything means something, has a position, or should. The novels I’ve loved the most have been ones that have delighted but also instructed. Even the Mills & Boons we talked about, which you know it’s very easy to say is not proper literature, has propaganda insofar that love is something that makes a woman’s life complete: it comes with a tall, dark stranger, a woman is supposed to compromise to make that happen, love starts with dislike and is supposed to blossom, etc. . . . It seems to me now that fiction is not supposed to have a position or is supposed to pretend it doesn’t have a position, that everything is supposed to be ambiguous and ironic. I don’t know, it just doesn’t appeal to me.

Adichie: I think it’s fair to say that Americanah comes from a world view, a position of, for example, wanting human dignity and gender equality. The position might not be overt, and should not be, but it does come from a position.

ArtsATL: In Americanah, Obinze criticizes contemporary American novels for not taking risks or being serious, grave or urgent. What about a novel like Kathryn Stockett’s The Help?

Adichie: It’s not as if race isn’t written about in America. It’s just that it’s written in a way that keeps people comfortable because race is such an uncomfortable subject in the U.S. I really admire Dave Eggers’ work because I think he has something to say about contemporary America.

ArtsATL: In an interview you said that when you started reading Dave Eggers’ novel What Is the What, based on the life story of a Sudanese refugee, you wanted to hate it because an American man was trying to tell the story of an African child, but instead you loved it. Why do you think Eggers was successful?

Adichie: He wrote with a certain kind of humility and he let the voice speak for itself. You get the sense that he didn’t start off the story with an end in mind. I think sometimes the problem with a book is that the author sets out to prove a point such as “Africa is terrible and America is perfect.”

ArtsATL: In your TED Talk “We Should All Be Feminist” — which singer Beyoncé sampled in her song Flawless — you stipulate that even powerful women often rely on men for prestige and income. In Americanah, the American wife, Kimberly, and the Nigerian wife, Kosi, do exactly that. Would they be able to see they are identical to each other?

Adichie: I think Kosi would, but Kimberly probably wouldn’t because the story Kimberly and Kimberly’s culture tell themselves is that all is well with gender.

ArtsATL: Your 2009 TED Talk, “The Danger of a Single Story,” your short story “Monkey Jumping Hill,” in which a white professor instructs African students on authenticity, and Binyavanga Wainaina’s satirical essay “How to Write About Africa,” are seminal in criticizing the tendency to exoticize a culture. Do you think this has changed?

ArtsATL: In your 2012 Commonwealth Lecture you also say that “citizenship is a sensibility.” In that vein is it fair for artists to be seen as cultural ambassadors?

Adichie: It’s unfair because people are individuals, and I don’t expect anyone to represent their culture because I’m aware how much diversity there is.

ArtsATL: And yet writers and artists are expected to be spokespersons and so seem to serve that role for better or worse.

Adichie: Usually those expected to do so are people of color or they come from countries that are not very well known. I don’t think anyone thinks Richard Ford has written books representing all of the white men in America. But if you are from Africa, Asia, South America, then, yes, somehow you’re supposed to represent where you’ve come from.