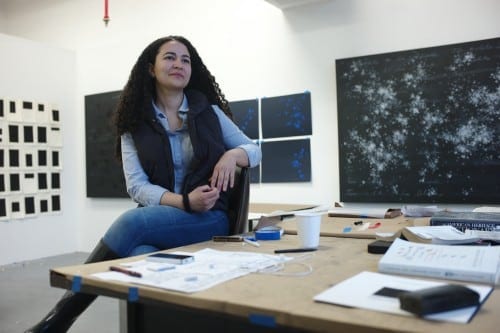 Bethany Collins in her studio at the Studio Museum of Harlem. (Photo by Jati Lindsay)

NEW YORK – Five months into a prestigious residency at the Studio Museum of Harlem, Bethany Collins spends her days and nights in a studio overlooking storied but gritty 125th street. Photos of clouds in Georgia and Alabama skies tacked to the wall and a newly purchased jade plant are talismans of the openness and verdure the Atlanta artist left behind.

But the contents of the studio make it home: Four new pieces from her White Noise series hang in various stages of completion. Dictionaries — seven of them — are stacked on the window ledge or open on her work table.
Collins, one of ArtsATL’s 30 under 30 artists, uses the tomes for research and sometimes even the material of her meditations on race and identity.

A conceptual artist who makes alluring paintings, she parses, decodes and deconstructs language and then deploys sentences, words and letters as visual vocabulary, writing, erasing and finally exploding charged painful phrases into showers of letters.

The residency comes with a stipend, this rent-free studio on the museum’s third floor and a year in the center of art world. “I’ve had more studio visits [with curators, collectors and other artists] since I’ve been here than I had in a year in Atlanta,” she says. “It’s nice to have eyes on the work.”

There are other opportunities, of course. Collins had just attended the opening of Carrie Mae Weems: Three Decades of Photography and Video at the Guggenheim Museum, and Kara Walker was to speak at the Studio Museum the evening of our visit. She takes weekend art jaunts with Lily Lampe, another transplanted Atlantan. She counts seeing first-hand Byron Kim’s charged minimalism and David Hammons symbolic assemblages as highlights
Perhaps the most important benefit of the residency is the luxury of time. “In Atlanta I taught six classes, and had to fit making art into evenings and weekends,” Collins says.

Now she has days on end with no responsibilities for anything but making art, and she’s used it not only to add works to her ongoing series but also to experiment and explore new paths. New to her series of drawings of partially erased dictionary definitions are a set of contranyms — words that carry two opposing meanings. (“Oversight,” for instance, means watchful control and something not noticed.)

She’s found 75 and plans to do them all. The series comments on the arbitrariness of language, but, like most of her work, it is personally freighted. The idea of a word that holds opposite meaning might be a metaphor for her biracial heritage.

Something brand new: Collins has taped pages of the 1993 edition of Southern Review to the wall and blacked out the text, creating rectangular blocks akin to Allan McCollum or Ad Reinhardt paintings. “People always want to talk about my art being southern,” she says “I don’t think of myself as a southern artist; to me that’s a white male.”

It might be a negating concept, but it is also a relief. “I’ve been dealing with noise [referring to her painting series] for so long,” she says. “This feel silent.”

Perhaps the silence is a little wish fulfillment. One downside of being in New York, she says, is the lack of personal space. “Some days I’m ready to go home — I just want to be alone in my car,” she says with a laugh.

Collins admits that having unlimited time has been an adjustment as well. The approach of her exhibition at the museum with the two other artists- in-residents, Kevin Beasley and Abigail DeVille has been useful as a deadline.

Though the residency is sure to open doors and plant seeds, it is too soon to say how it will impact Collins’ work. But it has gotten her to thinking about talking about race and identity but in a different way. “Maybe if I simplify it, it becomes broad,“ she muses. And she now sees making a living as an artist as a possibility.

But then, perhaps the spark will come from reading four of Octavia Butler’s science-fiction novels on the subway ride to and from her Crown Heights apartment — a marathon inspired by the Studio Museum‘s recent exhibit, The Shadows Took Shape, which focused on afrofuturism.

No matter what, Bethany Collins’ own future looks bright.