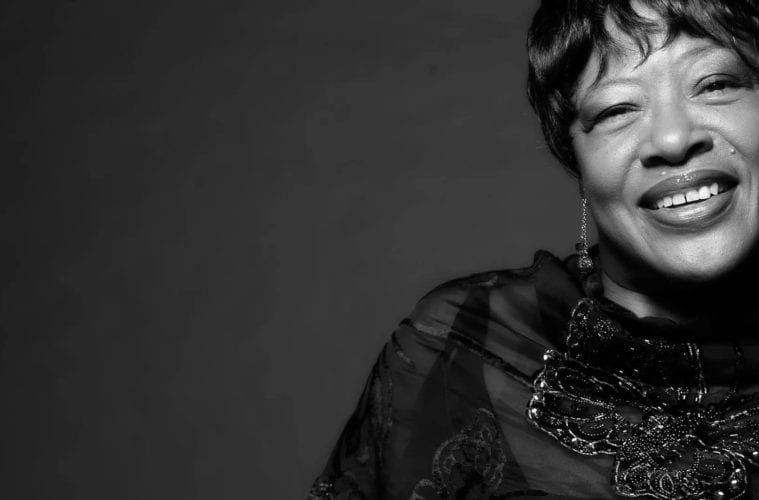 “Wild Women Don’t Get the Blues,” said Ida Cox in 1924. Georgia Music Hall of Famer Francine Reed is living proof that these words are nothing short of the truth. Reed performs Saturday at Symphony Hall as a member of Lyle Lovett’s Large Band.

Still charming and tantalizing audiences at age 72, Atlanta’s queen of the blues now splits her time living and performing in Atlanta, Phoenix and on the road with Lovett.

Reed grew up in Phoenix and comes from a large musical family. After relocating to Georgia in the 1990s, she released her debut solo album, I Want You to Love Me (1995), followed by Shades of Blue (1999) and several others. Reed returned to Phoenix in 2016 to care for her son, who has heart issues.

ArtsATL sat down with Reed in January before a sold-out show at Eddie’s Attic to discuss her singing career, the meaning of family, her amazing fried chicken and much more. We reprise that interview as she prepares to perform Saturday.

ArtsATL: How did this long musical journey begin for you?

Francine Reed: I never had just one moment that struck me — I could always sing. It was always there, like getting out of bed and drinking water. I’ve sang since I can remember because it was a God-given talent. Then it became a way by which I could raise my children alone. I guess it was along then that I thought this is what I’d be doing. But I certainly never thought of not doing it. Reed has toured with Lyle Lovett and His Large Band since 1984. (Courtesy of Jazz Aspen Snowmass)

ArtsATL: You’ve been touring with Lyle Lovett and His Large Band since his first album. Can you share how the relationship developed?

Reed: I’ve been touring with Lyle since 1984, to be exact. Lyle had met some of my friends in Germany. They were in a band from Phoenix called J David Sloan and the Rogues — the band liked Lyle, and Lyle liked the band. Lyle came back to the States to record a few demos and then decided he wanted to add a singer. When he asked about a singer, my friends brought him to see me perform. In no time at all, we were on the road. I owe so many thanks to Lyle. He is positively a wonderful person.

ArtsATL: You’ve been in the ever-changing music industry for several decades. To what do you most attribute your staying power?

Reed: That would take some thinking about. I’ve always done so many of the wrong things, and I did live the life of a musician. I guess I’ve learned from watching my family to do what they do so very well. I’d have to say I attribute my staying power to having such a truly wonderful family because I was able to watch my sister, Margo, and my brother, Michael, and observe how they carried a show. Looking, learning and paying attention has been a very big part for me.

My children, who have always given me the strength to carry on and continue to do so on a daily basis, even when I thought I wouldn’t be able to carry on. There’s also all the people — many of whom are in Atlanta and Phoenix — who have believed in me and have supported, encouraged and given me a foot up over the years. I have been lucky because I’ve had people who cared enough to show me what I needed to know to keep going forward. They made it where I just had to show up. So, these are the things and people I attribute my staying power to.

ArtsATL: You’ve given so much to the world of blues. What has the blues given back to you? Reed has become one of Atlanta’s most beloved singers.

Reed: I don’t think I’ve really given anything to the blues, and I didn’t really start singing the blues until I got to Atlanta. I had a couple of blues songs in my repertoire, and that was it. I didn’t think I even liked the genre, but what I didn’t know was that it was blues that I’d been listening to and loving all along. I was all about R&B and jazz. That was until somebody told me some of the music I thought was great actually was blues.

I got the Blues 101 education in Atlanta from Blind Willie’s and The Shadows — they were talking about the music and singing the blues. At first, when they gave me the songs to sing, I thought, “I can’t sing that.” But there I was, living across from Blind Willie’s and going over there to hang out — and that was one of my revelations. It was from that support and blues discovery that my first album came about in the early ’90s. I was thrust right into a blues thing. I guess you’d say that the blues gave me a new gig and some really great friends, whom I’m still associated with to this day.

ArtsATL: It sounds like you had a lot of courage going into all that.

Reed: Yes, courage is good. I dusted myself off, took a deep breath and rolled with it. But every time I do something, I have to tell myself to think back and remember that I did something before and I can do something again — and it might turn out good. So, don’t be afraid to take a chance. I guess if I could move across country alone with four young kids, three suitcases, a trunk, a few hundred dollars and my black skillet without knowing what I was doing, I could do most anything.

ArtsATL: You mentioned moving with your black skillet. Do you still have it, and can we assume you like to cook?

Reed: Absolutely, I still have it, and I absolutely love to cook.

ArtsATL: What’s your best dish? And besides cooking, what else do you love to do when you’re not performing?

Reed: My fried chicken! And I love to sew and crochet — I can simply lose myself to those things.