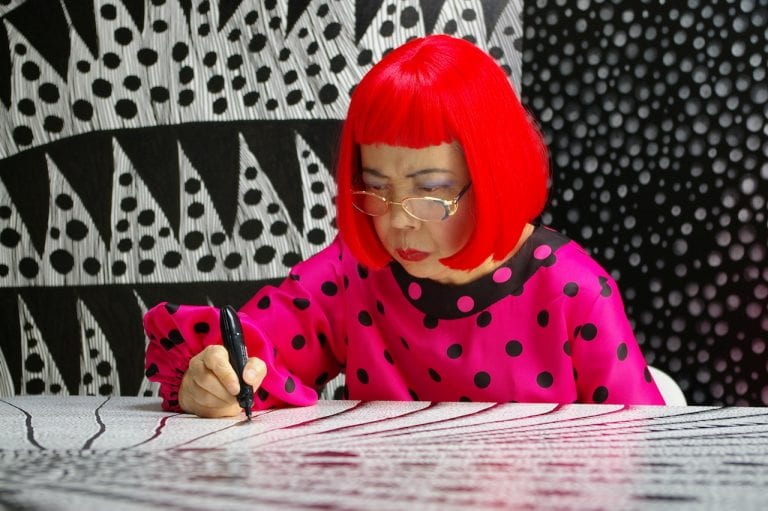 The Kusama: Infinity documentary began before the Japanese artist was well-known in the United States.

Just ahead of the Yayoi Kusama exhibition at the High Museum of Art, which is perhaps the most coveted tickets in town, comes a new documentary about the Japanese artist that opens Friday at Regal Tara Cinemas 4.

The documentary, Kusama: Infinity, provides exceptional insight into this singular and historic artist who weathered a grim childhood, New York art world sexism, mental illness and the social scorn of being a woman with avant-garde tendencies to create an incredible artistic legacy.

Kusama: Infinity also has a local connection. Atlanta-based producer Karen Johnson worked alongside the film’s director Heather Lenz to bring Kusama’s life story to the screen, long before the Infinity Mirrors hype hit. Johnson recently spoke with ArtsATL about the film and the artist who inspired it.

ArtsATL: What made you want to be involved in Kusama: Infinity?

Karen Johnson: Heather Lenz and I both graduated from the USC School of Cinematic Arts. I graduated before her and was producing films when a professor invited me back to hear pitches from his students and give feedback. That was 2004, and I remember her pitch was so compelling. She handed me a written treatment with pictures of Kusama and her art from the 1950s and 1960s and said, “This female artist was as important to the development of art in America as the Beatles were to rock ’n’ roll, but no one in America knows who she is.”

She went on to describe some of the amazing details about Kusama’s life, and I was hooked. The problem was, we were both responding to how incredibly great Kusama’s story was, but not to the market for films at the time. It’s still incredibly hard today for a film like ours, and we celebrate films like Crazy Rich Asians for bringing diversity to the screen. But back then it was next to impossible. People thought we were crazy to get involved in a film about a Japanese female artist whose name no one could pronounce. There were years of rejection for this project.

ArtsATL: One takeaway from the film is how often we see only the success in artists’ paths and miss how painful and difficult the road was and how haunted success can often be for creatives despite their eventual triumphs. So much of Kusama: Infinity feels very bittersweet. Can you talk about the film as having to do with the often undisclosed life of artists beyond the individual case of Kusama?

Johnson: I agree, unfortunately; the path of pursuing virtually any art is, more often than not, painful and difficult. I grew up in such a household. My parents were jazz musicians, and not ones who ever became famous. But nonetheless, they endured and made it their life’s work. I witnessed that struggle, and it’s what eventually led me to my first career in law. It was a desire to escape from that struggle. We don’t value the arts as a society the way we value other work in this country. Other countries allocate public funds to the arts in a much greater amount than we do. Films are actually government subsidized in other countries.

Kusama lived this painful, difficult course and came out the other side to success. That is the sweet to the bitter. Unfortunately for too many very talented artists — and I put my parents in that category — the sweet never arrives. If you think about it, Kusama is really only just now getting to the sweet part near the end of her life. Our goal was always to get the film made during her lifetime so this art form of film could celebrate her while she could enjoy it. Luckily, that happened.

ArtsATL: The film began as a narrative film then transformed into a documentary. Why do you think that was the better approach?

Johnson: Heather was always interested in making a documentary and a biopic, but she pitched me the documentary. She realized the odds of a young woman director getting to direct a period movie with foreign locations and a pretty high budget right after grad school were slim to none. She also wanted to get it done while Kusama was still alive and able to tell her own story. Of course, Heather also thought it was going to get done much faster — she says she anticipated one year. Then she thought the documentary would launch her career and let her return to the biopic idea and direct that. We hope that’s the case!

ArtsATL: This film project began long before the current hype over Kusama’s Infinity Mirrors. You struggled with getting the financing and recognition for an artist who was, in many ways, not well known when the project was launched. What allowed you to complete the film despite that hard sell?

Johnson: What ultimately allowed it was Kusama’s rise to fame made people interested in the subject, and based on the strength of an early version of the film we completed around the time of Kusama’s 2012 retrospective at the Tate Modern, we were able to pre-sell the film. As Heather says, she began the film with the hope that she would bring more recognition to Kusama’s work, but it was Kusama’s work that ultimately brought greater recognition to the film. As Kusama gained attention in the marketplace, so did our film. It was a very long struggle, but we are still glad we started it when we did because some of the friends and colleagues of Kusama who we interviewed in those early years are no longer with us.

ArtsATL: What other projects are you involved in?

Johnson: I’ve made it my mission to produce films that are by, for and/or about compelling women. It’s a choice I made when I changed careers. It’s been a challenge. I’m just completing a feature documentary called Making Waves: The Art of Cinematic Sound, which has a female director, writer, cinematographer and producers. I’ve developed a travel doc series with an amazing local street style artist named Lily Gatins who moved to Atlanta from China. She’s Dominican by birth, a world traveler and avant-garde like Kusama. She’s a curator of fashion and of those who create it. She’s also a favorite of street style photographers around the world, and when she shows up in her avant-garde looks, they photograph her, giving these new designers exposure.

I’ve also been working for many years now on another passion project about artist Charlotte Salomon, a young German-Jewish woman who was murdered in the Holocaust at age 26. In that brief life, she painted a masterpiece work called Life? or Theatre? of over 1,000 paintings that tell her life story. I guess you could say I’m attracted to artists.