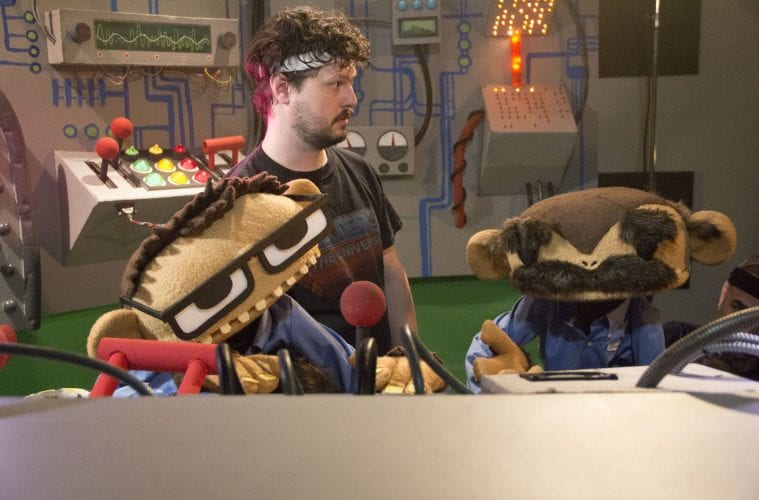 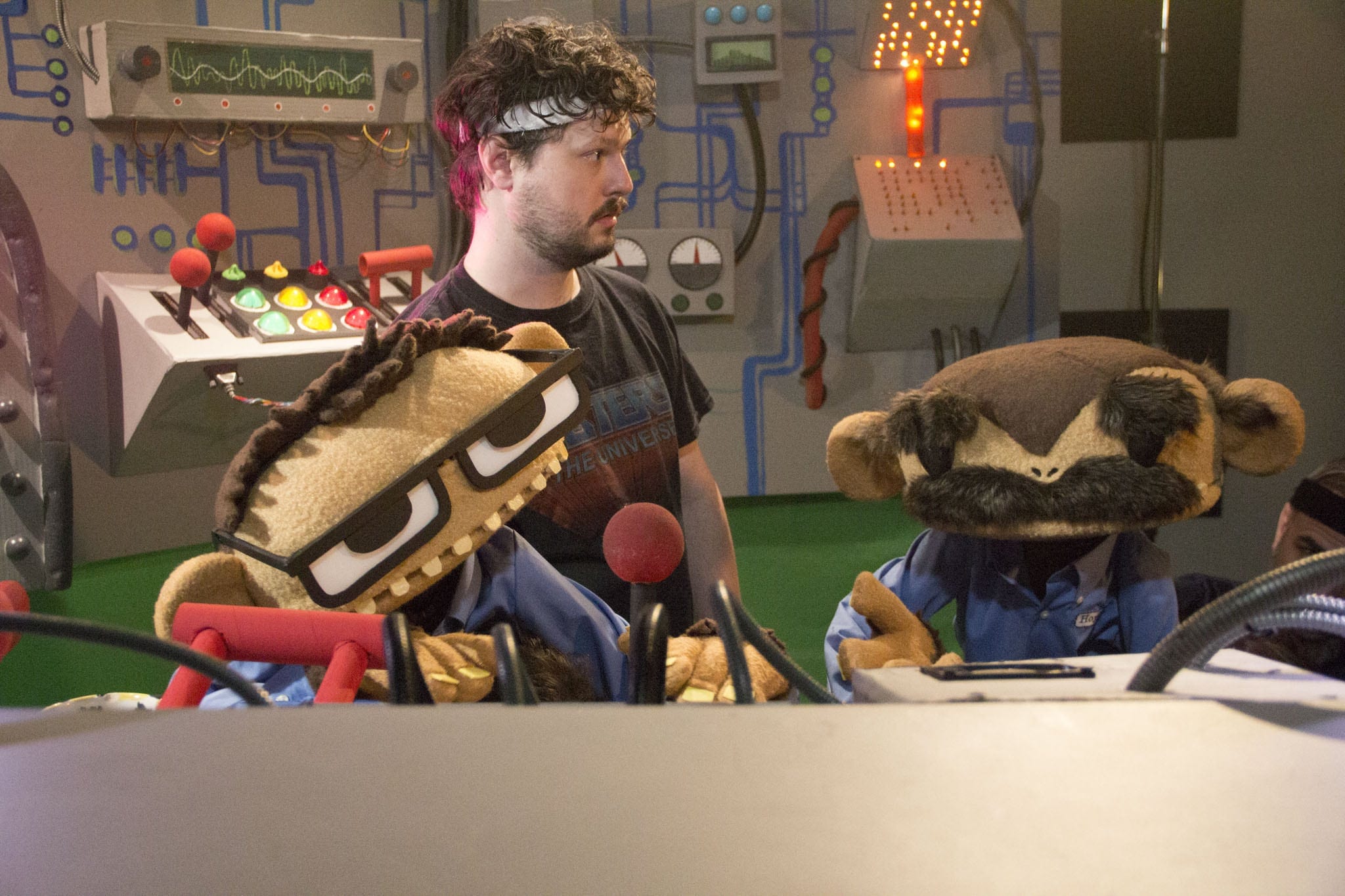 Puppeteer Beau Brown on the set of Monkey Branes. (Photos by Matt Bailey)

Standing before a giant control panel, two workers named Dewey and Hoyt are having a discussion about a Craigslist experience that went awry. They could be technicians at a nuclear plant, a research laboratory or home security monitoring center. Just ordinary guys doing their job — except they happen to be monkeys. And they are operating a portal that taps directly into the brain of a two-year-old named Rosie.

This scene was recently enacted by four puppeteers on a sound stage before a film crew of almost 20 people on the set of Monkey Branes, a film short that is being produced by New Puppet Order for the upcoming XPT: Xperimental Puppetry Theater, at the Center for Puppetry Arts (May 15–18). Monkey Brains marks the ninth project the filmmaking collective has created since their 2010 debut with Shadow Puppets and their fifth entry in the annual XPT event.

Composed of a core team of Beau Brown, Sam Carter and Darrell C. Hazelrig, New Puppet Order has slowly been building an international reputation with their own eccentric brand of puppet cinema, which blends together fantasy, sci-fi and social satire in a gleefully irreverent, freewheeling mashup. Over time, the trio has learned to split the filmmaking responsibilities in a way that utilizes their creative strengths.

Carter explains the division of labor on Monkey Branes like this: “Beau’s building the puppets and he’s supervising anything he’s not building himself. He’s our lead performer and he handled getting all the other puppeteers. I take care of art and some of the logistics of production. Darrell directed and edited. I usually take the head writer role but we all have input on what we’re writing. It’s taken a little time to figure it out but it’s slowly but surely turning into a well-oiled machine.”

The puppet shorts produced by New Puppet Order have some defining aesthetic choices. For one, the puppets don’t talk in crazy, cartoon voices. Instead they usually speak in the normal voices of the actor/puppeteers which brings a sense of reality to the often absurdist situations. The writers are also not adverse to working in an occasional pop culture reference (The Walking Dead, Harvey) or making snarky political jabs when the spirit moves them. Their puppet shorts are also geared toward adult audiences, opting for a funhouse mirror view of the real world, all of which makes them ideal collaborators for the XPT presentation. 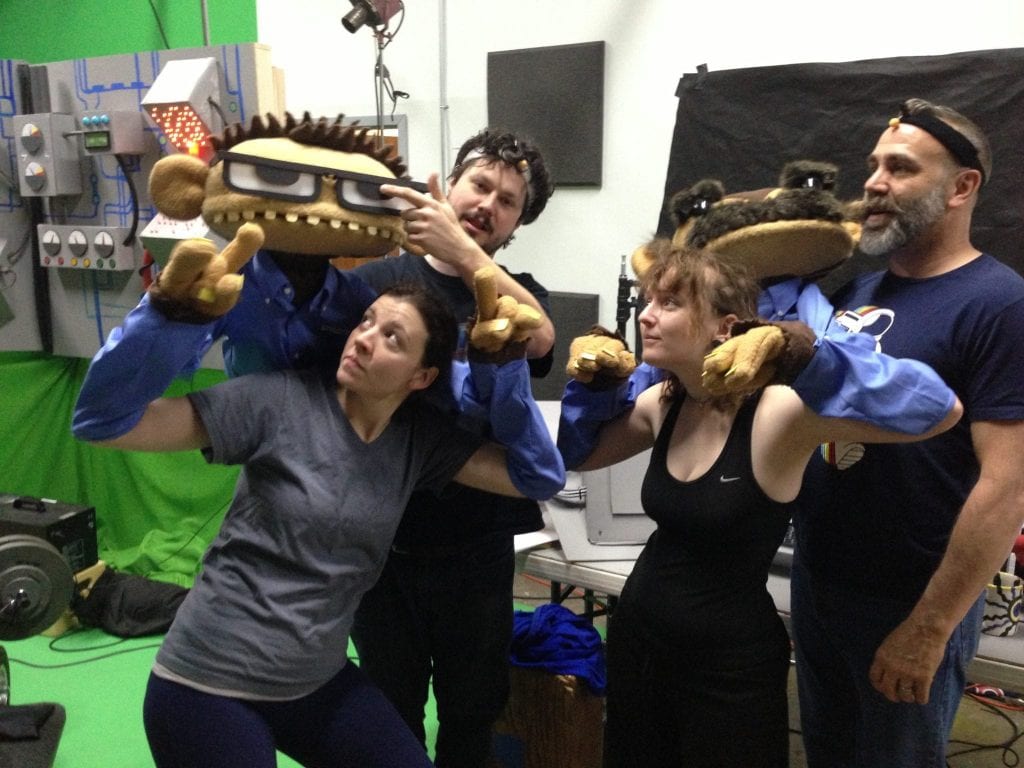 The guidelines for submitting a puppet film short for the XPT event are fairly straightforward with a recommended length of ten minutes or less. “The concept has to be experimental in some way,” Brown explains. “That’s up to you to define as the project director. Sometimes we’re experimenting with a medium we’ve never used before or we’re using a different style of puppets. You just challenge yourself in some way.”

Carter says that their new XPT project was inspired by recent changes in their lives. “Beau and I are both young dads. I have a two-year-old, he has a one-and-a-half-year-old. We got into this conversation about how a lot of the time the things kids do make no sense.”

This led to a brainstorming session in which the three filmmakers fleshed out a decidedly surreal concept: “What makes children of that age do all of those crazy things,” Hazelrig states, “is because they have monkeys controlling their brains.”

Utilizing home movie footage of Carter with his young daughter Rosie, Monkey Branes cuts back and forth between events happening in the external world of the child’s life and the internal operation of her brain control center which is manned by two agitated, blue collar monkeys. At the center of their giant console is a portal that taps into the child’s mind. This concept was also explored in Ed Is a Portal, New Puppet Order’s previous film short, in which aliens from another dimension invade Earth through a convenient gateway in the main character’s head.

Ed Is a Portal was featured at this year’s Atlanta Film Festival and was selected as an entry in the LA Comedy Shorts Film Festival this month. The film is a proven audience pleaser, but it turned out to be one of NPO’s more difficult production shoots. The trio agrees that they usually start out with a much more ambitious concept in the beginning but have learned through challenging productions like Ed to scale it back to a more manageable approach.

The Monkey Branes shoot was a breeze, even though NPO started with five monkey characters before reducing their cast of puppets to just two.

One vast improvement has been the advantage of being able to shoot all of the puppet scenes on a single set at ECG Productions in Atlanta, where improvisation or last minute changes were easier to manage and execute. Hazelrig also stresses the importance of long-range planning. “We scheduled our shoot date to where we have a month and a half of post time. That’s more than we’ve ever, ever had,” he says.

The lightweight foam puppet design was a major asset in streamlining the production process. “The front of their faces are made out of a rigid closed cell foam,” Brown explains. “The back of their heads is made out of a more breathable open cell foam so it doesn’t trap all the heat inside the puppet. These puppets are representative of every other puppet I’ve made and what I’ve learned.”

Unlike previous XPT projects, Monkey Branes could possibly have an extended life beyond its premiere at the Center for Puppetry Arts in May. “We’ve been talking about adapting this into a web series,” Carter says. “The idea that monkeys run people’s minds for a living, there’s a lot that can be done with that, especially if it’s a union job and they both have tenure so you can’t fire them. We can have them bouncing around from brain to brain and have different actors playing the person they’re operating.”

In terms of other pending NPO productions, Carter admits, “We’ve got this dream project that we’ve been talking about and pining over for a long, long time that could be a series, it could be a feature film. It’s a very big idea, which means that it will require a bigger budget and a lot more commitment to making it.”

In the meantime, NPO continues to take the less-traveled road with their cinematic visions, and Monkey Branes is no exception. As evidence of their no-rules approach, Carter proudly states, “There’s an old filmmaking adage that you should never work with children, animals or puppets. And all three are represented in this film.”