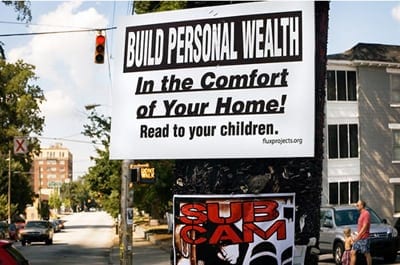 If you’re driving around and see a small sign that’s not trying to sell you something or send you to heaven, it’s probably one of John Morse’s “Roadside Haiku.” The Atlanta artist has composed 10 poems, two of them in Spanish, in the pithy haiku form, printed 50 signs of each and installed the 500 signs on well-traveled streets.

The haikus, an installation funded by Flux Projects, might also be visible on the information superhighway, thanks to Atlanta filmmaker Blake Williams. Williams, the president of Proper Medium, has made a two-minute video about Morse and his project designed expressly to go on YouTube, Vimeo and other social media.

Williams will be making a series of such shorts highlighting the artists participating in FLUX, the one-night public art spectacle coming to the Castleberry Hill district October 1, as part of a new partnership with Flux Projects called Flux Films. The idea is to give the organization and the individual artists a new tool to promote their work, one with a potentially global reach.

Williams, who made a video of the 2009 Le Flash, FLUX’s predecessor, proposed the idea because he likes Flux Projects and its public art programs. He envisions the series as a cumulative document creating a context not only for the one-night event but also for an environment conducive to a flourishing art community.

“I think Flux Projects is creating a context for others to produce work that is of higher quality and involves the public more than it has in the past,” Williams explains. “That’s my hope.”