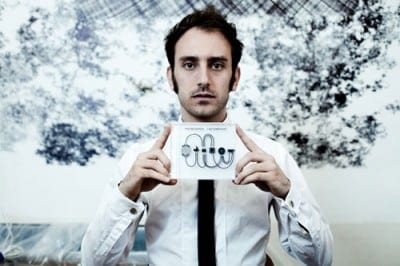 In the months after his Atlanta concert last December, I listened so often to Tristan Perich’s new “1-Bit Symphony” — playing it for friends, playing it for pleasure — that I burned out the battery. Fortunately, the 3-volt lithium watch battery is easily replaced.

Perich’s five-movement symphony is not a recording in the usual sense. It’s not even an actual compact disc. Rather, it’s a little electronic “performer” glued into a clear CD case, a 1-bit digital microchip that Perich programmed with his music — plus a battery, on/off switch, volume control and headphone jack. Assembled in Perich’s New York apartment by the composer and several assistants, and distributed by the Canatoupe label, the gadget makes various profound and whimsical statements on the evolving relationship between music and technology. The thing even comes with a printout of the complete programming code, for do-it-yourself types. But its lasting appeal will be from the euphoria-inducing music (which will also soon be available as an iTunes download).

The 1-bit soundworld, Perich’s musical signature, represents the lowest possible quality of digital audio, and today it recalls the tinny and crude “Pong”-era video games from the 1970s and ’80s. Perich might even be poking fun at people who lust for the latest and sleekest gadget, as if that were an end in itself. Yet where his debut in the home-made audio realm — “1-Bit Music,” from 2009 — sounds like bouncy and geeky computer pop, the new “1-Bit Symphony” somehow seems like the voice of a substantial new classical composer. It’s good to see the critics raving about it. The Rest Is Noise calls it “fairly electrifying.” The Wall Street Journal says “the oscillations have an intense, hypnotic force and a surprising emotional depth.”

Perhaps Perich seems to represent the future of the classical genre precisely because teasing apart his nifty-retro technology and his art isn’t so easy. As Bang on a Can composer David Lang told me for a Musical America profile of Perich, “The music is really good … and Tristan’s presentation of it puts you in a mood to enjoy it.”