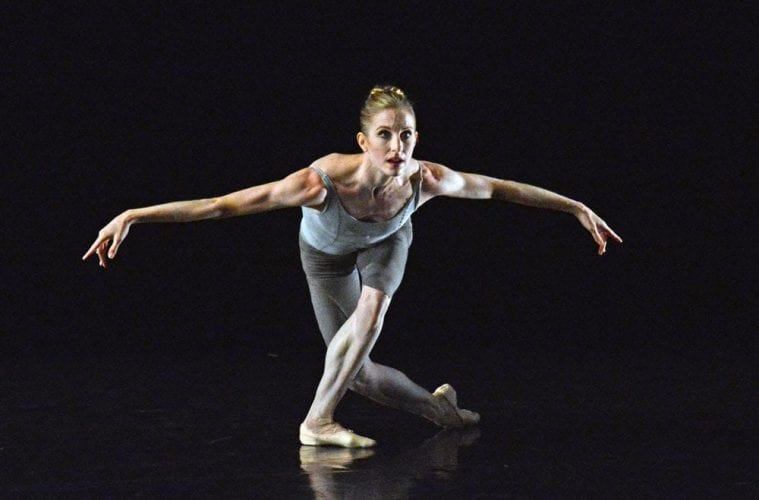 She has chosen four cutting-edge contemporary choreographers — Kyle Abraham, Joshua Beamish, Brian Brooks and Alejandro Cerrudo. Each one has created a duet for her and is also partnering her. She set out to find choreographers with no connection to ballet where dancing barefoot is de rigueur — a challenge Whelan says she was up for. Restless Creature hit the road on a five-month national tour earlier this month.

Coming to the end of her performing days at NYCB, Whelan weighed her options. She knew she still wanted to dance and felt there was more she wanted to express. “If I’m not being creative, I’m not alive.” she says. “I started feeling like that at the ballet. My repertoire was dwindling, I was losing my creativity, I was aging.”

Whelan, 47, was at the age that most ballerinas have either retired or are considering retirement. “I’ve done everything there [at NYCB],” she says. “I’ve eaten everything I could there, I needed to forage somewhere else.” Other former ballet stars such as Alessandra Ferri, Sylvie Guillem and, most notably, Mikhail Baryshnikov have embraced modern dance in their next careers. But Whelan has taken this idea a step further — she also wanted to dance with the artists who created the duets for her. That meant she had to find choreographers who were still dancing and who could dance with her.

Whelan brings her show to the Rialto Center for the Arts Tuesday at 7:30 p.m. In an early morning telephone interview a week before she set off on tour, Whelan said she chose choreographers that she was drawn to, often based on nothing more than feel.

“I don’t know why I like somebody’s work, but in my life right now these are the people I’m ‘turned on by’ artistically, and I wanted them to open me up,” she said. “They are different and it’s a struggle, but that is part of the joy. I can’t do this alone. I need these other artist and collaborators to help me do that.”

Whelan, who is as down-to-earth and engaging as a girl next door, says, “When I picked the guys, I was betting that we would have good chemistry. I knew I liked all their work but did not know them as people.”

She began working with Brian Brooks two and a half years ago. Brooks, a soft-spoken, articulate man, has his own troupe, Brian Brooks Moving Company. His work is intricate and daring and is best described as “dynamic architecture.”

In a telephone interview, Brooks says his reaction to Whelan’s invitation was “complete terror.” But he found her in rehearsals to be curious and receptive. “She’ll say, ‘Okay Brooks, lets try it,’” he says. Their duet, First Fall, is so intricate that it demands utmost trust between the two. “His partnering is like I’ve never seen, such close dancing and so extreme,” says Whelan. “I’ve never done a duet that is quite so tangled.”

Kyle Abraham, a beautifully chiseled dancer, has created works for Alvin Ailey American Dance Theater and has his own company, Abraham.In.Motion. Whelan spotted him at the Fall for Dance festival at the New York City Center. Whelan says, “He is incredibly tense, yet very fluid with a certain urbanism. His work has helped me find new fluidity in my spine.”

Whelan calls Joshua Beamish the “isolation king.” The youngest of the group, he also presented her with a tremendous challenge. “I’m starting to get him and figure out the timing,” she says. Kyle Abraham is quite familiar to Atlanta dance fans.

Alejandro Cerrudo, the elegant Madrid-born avant-garde dance maker, is resident choreographer of Hubbard Street Dance of Chicago. Whelan, a great fan of this famous troupe, had never met Cerrudo, but they had instant chemistry. “The day he stepped off the plane we went straight to the studio and spent five hours experimenting with steps,” she says.

Whelan thinks Restless Creature is a natural segue from NYCB. During her career — she was principal dancer since 1991 — she amassed possibly the largest and most diverse repertoire of any dancer in the company’s history. Although she has performed the gamut of roles — from Swan Queen to the killer bug in Robbins’ The Cage — she is most notably identified with the legendary George Balanchine’s abstract leotard ballets.

Whelan’s dance aesthetic was heavily influenced by visiting choreographers who came to make ballets with the company. Whelan estimates she has worked with no less than 40 choreographers.

The list is long but here is a sampler: Karole Armitage, Wayne MacGregor, Ulysses Dove, Albert Evans, Stephen Petronio, Twyla Tharp, Richard Tanner and William Forthye. Chief among them are Christopher Wheeldon, and Alexei Ratmansky, who Whelan says “inspired the idea of dancing with a choreographer.”

“Just spending time in the studio with each of these different artists,” says Whelan, “and having them develop me for me, and show me parts of myself that I didn’t even know were there, has been foremost in developing who I am as an artist today.” Whelan starred on the biggest stage of all: the New York City Ballet.

With Restless Creature, Whelan is finding new challenges and comfort zones. She danced barefoot in Wheeldon’s iconic After The Rain for the first time last summer and again at her farewell performance.

When she started rehearsing with her new partners, a modern-dance friend said to her, “Wendy, you’ve got to take your shoes off or you will never find what your body needs.” Whelan says going shoeless means “there is much more contact with my muscles, I can spread my toes, and I can get a different grip on the floor.”

Whelan says she is specifically looking forward to the stop in Atlanta. She remembers, as a young ballet student growing up in Louisville, hearing about how great the dancers were at Atlanta Ballet. She says, “I thought about them as much as I did about American Ballet Theatre and NYCB.”

As if to test her resolve in her new project, Whelan suffered a major setback in 2012 that led to surgery. It began as a minor slip in ballet class that grew progressively worse while she was rehearsing her new duets and continuing to dance with NYCB. “That whole year I spent coping with the injury,” she says. “The choreographers catered to what my body could do.”

After months of living with pain and discomfort, the dancer was told she needed corrective hip surgery. That meant several months of intense rehabilitation and recuperation. It also meant rescheduling the Restless Creature cross-country tour — a potentially devastating blow.

Restless Creature was scheduled to debut at Jacob’s Pillow in Becket, Massachusetts, in 2013. Whelan was determined to honor that date. “I knew that I could not miss that premier because it was the stepping stone to my future,” she says. “It was a huge opportunity to move forward.” The day after the premier, she had the surgery.

After ten-months of diligent rehab, she returned for NYCB’s fall season, and on October 18, 2014, ended her 30-year career with a triumphant farewell performance. She was incandescent in all five ballets — Balanchine’s La Sonnambula, an excerpt from Robbins’ Dances at a Gathering, Alexei Ratmansky’s sublime pas de deux from Concerto DSCH, Wheeldon’s iconic duet for her from After the Rain, and B 2 With & From. For that final ballet, Ratmansky and Wheeldon collaborated on a world premier piece d’ occasion. Created just for Whelan and two partners, it was a fitting honor from the two choreographers who were most meaningful in her career.

“It’s over,” says the ballerina. “I feel like a new person. As I look out my apartment window on Amsterdam Avenue, I think of the possibilities. Often I tell myself, ‘Well, you don’t have to do this today,’ and that is new. I feel grounded, and excited, and I’m free.”