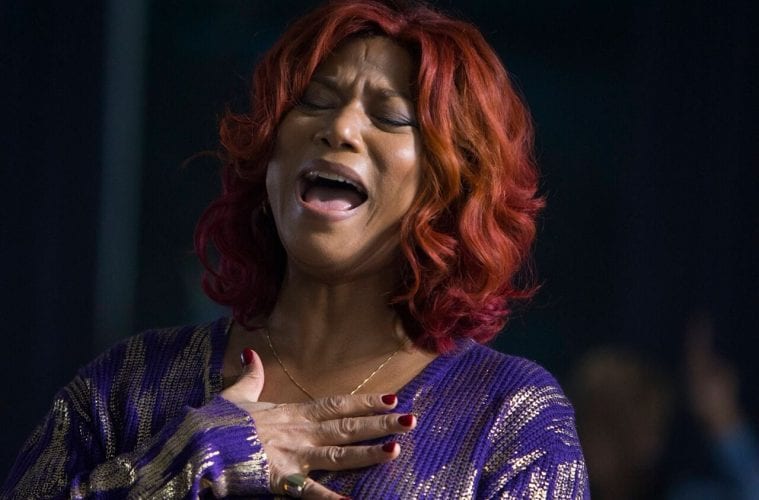 An Atlanta that many viewers have rarely seen before is the backdrop of FX’s critically acclaimed new series Atlanta, created by Stone Mountain native Donald Glover. And now executive producers Lee Daniels (Precious, The Butler) and Tom Donaghy (The Whole Truth) have teamed up to bring us another authentic and seldom glimpsed side of the city for Star, the pilot film for an upcoming Fox television series about three aspiring singers trying to navigate their way to success within the cutthroat music industry.

Currently shooting in locations in and around Atlanta, Star boasts an impressive cast that includes Oscar nominee Queen Latifah, Benjamin Bratt and Lenny Kravitz as well as relative newcomers Jude Demorest, Brittany O’Grady and Ryan Destiny as the three performers that drive the narrative. The pilot will premiere Wednesday night on Fox, and the first season is already completed and ready to go. In a phone interview with ArtsATL from his Los Angeles office, Star co-creator Donaghy discussed the origins of the project, the casting and other aspects of the upcoming series.

ArtsATL: Can you give me some background on the development of Star?

Tom Donaghy: Lee Daniels wanted to make something entire different from Empire [the Fox TV series starring Terrence Howard as hip-hop mogul Lucious Lyon], and he’d been circling the idea of a girl group. He was meeting with a bunch of writers at the time to bat ideas back and forth, and we thought it would be interesting to discuss a girl group just beginning as opposed to a girl group at the height of their fame. Lee had started out as an actor’s manager so the beginning of his career was very much about beginning other people’s careers. And he saw from the ground up how that played out in a very down and dirty way. I myself had started out as a performer and studied dance and thought I was going to be a dancer, so I went through similar things though it was a different field. We just thought it was a fertile field for a narrative. That’s where it began and we just batted ideas back and forth.

We also talked about movies we were interested in and the films of Bob Fosse. We talked about Lee’s early work like Precious, which had a big influence on this series. And we talked about great movies about trying to break into show business such as Valley of the Dolls.

ArtsATL: Was Atlanta always the top choice as the location?

Donaghy: Atlanta was not the first consideration. Lee and I are from Philadelphia so we circled Philadelphia for a while because that city has a tremendous musical history. We talked about New York, we talked about Los Angeles but then we rather quickly started looking toward Atlanta because of its rich musical history and very vibrant scene that exists to this day. And also because of all the artists that call it home and because the city hasn’t been seen on television the way New York and L.A. or even Chicago have been seen. We thought: this seems fresh.

ArtsATL: Did you have Queen Latifah in mind for the series from the beginning?

Donaghy: Absolutely. Lee has known Latifah for some years and they always wanted to work together. As we conceived the character Carlotta we knew we had to think of someone who had a strong presence, a strong maternal presence, someone who was a performer herself, someone of a certain age and she just checked every box. She’s magnificent in the series.

ArtsATL: How long did the casting process take and was it conducted on a national level?

Donaghy: It took a long time. I would say from beginning to end it took several months. We auditioned worldwide actually. We had casting auditions in New York, in L.A., in Atlanta, in London and Australia. To find three girls who can sing and dance and act and were suited to these particular roles was extremely hard. However, we found Jude Demorest, who plays Star, very quickly which helped the pieces fall into place. ArtsATL: What are some of the prime locations used for the series?

Donaghy: Carlotta, who is played by Queen Latifah, owns a beauty salon in the Summerhill neighborhood surrounding Turner Field. We shot extensively there. We shot at Magic City [the legendary strip club] and around the Magic City area. We shot in Midtown and we shot in Decatur briefly. We were all over Atlanta. We were very happy to be on the streets there which has so much authentic life and hope to be able to convey that through the series.

ArtsATL: Are Atlanta musicians being cast in the series?

Donaghy: Big Boi [aka Antwan Andre Patton] is in an early episode and we are absolutely trying to tap into the Atlanta music scene and the artists that are there.

ArtsATL: In terms of the music, will it be original, created specifically for these characters?

Donaghy: Yes, a lot of original music but we are also remixing classic sounds. We are very much interested in the Gamble and Huff sound and Motown and trying to bring that to the youngsters who are watching for the first time but remixed in such a way that they can hear it with their young ears, if you know what I mean.

ArtsATL: Did you use mostly Atlanta crews or rely on Los Angeles-based crews?

Donaghy: It was largely Atlanta crews. Atlanta, as you know, has so much film and television production and such high quality production crews that we mostly used the people on the ground there. We’ve been in Atlanta since earlier this fall and we have soundstages that are about 20 minutes outside of Midtown [Westside Stageworks]. That’s where we’ve built the stages that we use mostly but we also shoot on the streets of Atlanta and we hope to capture as much of the landscape there as we can. It just brings a flavor that you can’t re-create in Los Angeles.

ArtsATL: Who do you see as the target audience for Star?

Donaghy: You hope to get as many eyeballs as you can, of course, but we want it to be a show for everybody. Certainly for young people because it’s very much about being young and having dreams and going after them. But we also have these characters played by Queen Latifah and Benjamin Bratt who are middle-aged people that are struggling with what it means to have given up their dreams . . . or should they go after their dreams again? It’s very much about parental figures and children and we hope both perspectives draw people in. I think there’s something there for everybody.