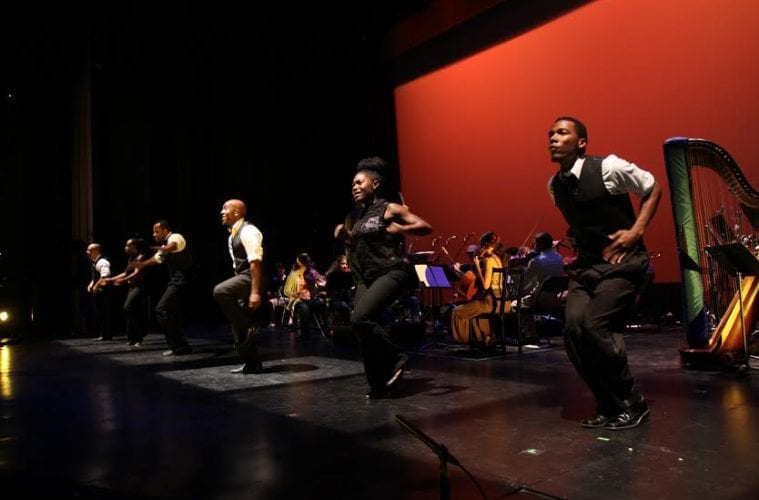 Preview: Step Afrika! makes its Atlanta debut in the NBAF to celebrate a once secret dance form Step Afrika! brings the art of “stepping” to the National Black Arts Festival.

Can you hear that percussive stomping and clapping and body slapping? Is it tap? Is it clogging? Is it Irish step dancing? No, it’s stepping, an African-American dance form that emerged from the Black Greek letter societies and it’s coming to Atlanta courtesy of Step Afrika! on Saturday at 6 p.m.

The Washington D.C.-based company will perform at Midtown’s Center Stage theater as part of this year’s dance-focused National Black Arts Festival (NBAF). This is the first time the full company has appeared in Georgia.

Step Afrika! was founded 20 years ago by C. Brian Williams, a Howard University graduate and member of Alpha Phi Alpha Fraternity, Inc. His fraternity membership is important because it’s where he learned to step. At that time, stepping was a closely held ritual that defined each society and bonded its members.

Few African-Americans and even fewer non-blacks ever witnessed it. Then along came filmmaker Spike Lee, Atlanta native and graduate of Morehouse College, who brought stepping into the public arena with his 1988 movie School Daze, an exposé of the traditions of black fraternity and sorority life. (The movie will be screened at Morehouse College on August 27 as part of NBAF’s film program.) “What [the movie] did for stepping was bring it to the African-American community at large,” explains Williams, who was a college student at the time. “It was a huge moment. I think the purists thought Spike was exposing the secrets of the tradition.”

No longer a secret, stepping was featured in the opening ceremony of the 1996 Summer Olympics in Atlanta; the Howard University Beta chapter of Alpha Phi Alpha performed at President Clinton’s inauguration. There are now elementary school stepping teams, cheerleading and church teams in communities all across the country.

Much of traditional stepping is performed in place, with the dancers facing front and executing a series of complex, rhythmic stamps, claps and body slaps. There are a few signature moves, such as raising one knee in front of the body and clapping underneath the thigh. The dancers are usually dressed in plain black tops and pants. Sometimes they chant, although Williams has been quoted as saying that fraternity and sorority chants are never used in public performances. Some steps and formations are also kept private still.

A marketing major, Williams wasn’t looking to create a dance company. In 1991, he was teaching business skills at a vocational school in Lesotho, Africa, when one day he saw a young boy doing a dance on the street. He was amazed to see that it looked a lot like stepping. He asked his friends about it and soon was engaged in an informal dance exchange in his apartment — he demonstrated stepping, they showed him the gumboot dance, so called because South African miners in the early 1900s were prohibited from speaking to one another and communicated by stamping out rhythms with their boots.

The first iteration of the company was formed in South Africa in partnership with the Soweto Street Beat dance theater. Back in the States a few years later, and still committed to the community service for which Greek societies are known, Williams and a group of friends created a step clinic to teach children the importance of teamwork, discipline and commitment, and to encourage them to attend college.

The first one was held in 1996 at a school in Savannah. The company still has a comprehensive education program and performs at schools and colleges around the country.

The Step Afrika! that Atlantans will see, however, is far more sophisticated than a step team or clinic. It is a fully fledged professional company with a repertory of more than 40 works, many of them incorporating other dance forms such as tap, jazz and African dance.

It tours nationally and internationally and has visited more than 50 countries. Most of the dancers are members of one of the nine Black Greek letter organizations and are college graduates in fields other than dance — sociology, biochemistry and business administration, for example. “We honor and pay tremendous respect to stepping’s original purpose and intent” of education and community service, Williams explains.

In Atlanta, the company will perform Symphony in Step, a groundbreaking fusion of stepping and classical music, in partnership with the Atlanta Community Symphony Orchestra and members of Alpharetta’s St. James United Methodist Church gospel choir.

The evening-length work comprises four selections from the company’s repertory: Ke Nako, stepping performed to a Gershwin-esque section of the score; Indlamu, a traditional Zulu dance performed with drums and in full African attire; Wade, set to the gospel song Wade in the Water and dedicated to the African-American church; and Nxt/Step, which includes three step movements: Canes and Chairs, Stepping, and the Train. “We have pushed the art form along in a lot of different ways,” says Williams.

Symphony in Step is set to an original score by Alaskan composer Randall Craig Fleischer. He approached the company after reading about them in a magazine. “He listened to our percussive stepping,” Williams says, “and built the score around that. It’s unique and makes for a nicely integrated production.”

Because Step Afrika! is the only professional company built on stepping, Williams says there has been little critical analysis of the form. Elizabeth C. Fine has written a well-researched book, Soulstepping, which traces its history and traditions, but little has been written about it in mainstream dance literature.

“We are a 20-year-old company but we are still in the position of introducing stepping to new audiences,” Williams says. “I don’t think we’ve gotten the credit for how far we have pushed the tradition. We have taken it from a monotone expression into narrative and symphony. We’ve demonstrated what’s possible, because if the art form is to stay relevant it has to be pushed while being preserved.”