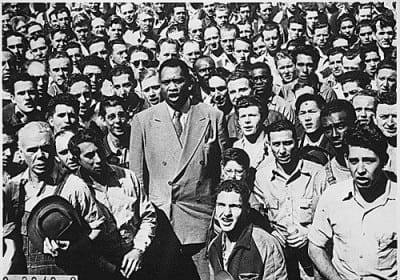 Avery Brooks is known to his fans mainly as Commander Sisko on “Star Trek: Deep Space Nine” and as Hawk on the TV series “Spenser: For Hire.” But since 1982, the imposing actor has also been playing Renaissance Man Paul Robeson in a one-man show, “Paul Robeson: A Play With Music” by Phillip Hayes Dean.

Brooks has performed the show only once in Atlanta in all those years, at the National Black Arts Festival in the early 1990s. He returns for a four-day run March 24-27 at Georgia Shakespeare, to kick off its 26th season. The shows will be performed in Oglethorpe University’s Conant Performing Arts Center. 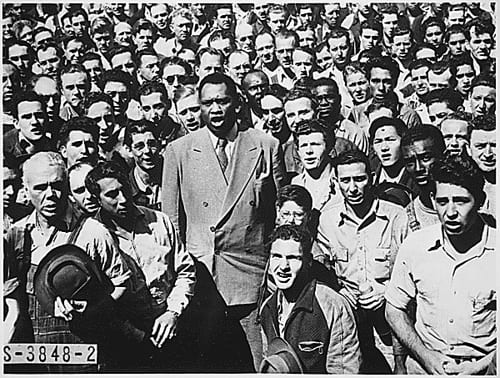 Brooks is passionate about Robeson (1898-1976), a protean figure who was successful as an athlete, singer, actor and author, but most of all as an outspoken political activist. He traveled to the Soviet Union in 1934 and said he was treated as a human being there for the first time in his life. His long association with communism and strong statements about the treatment of African-Americans caused him to be stripped of his passport and hounded by the FBI. Brooks also sings many of the songs that Robeson made famous, accompanied by Ernie Scott on piano.

In a recent telephone interview, Brooks spoke in his rich baritone, and with as much gravitas as the man he portrays.

ArtsATL: How did you first get interested in Paul Robeson?

Avery Brooks: I grew up understanding the history of the great people of my culture. Not only from my parents, but the community that nurtured me. The importance of history and our relationship to history is all a part of our upbringing, you see. My grandfather on my mother’s side graduated from Tougaloo College in Tougaloo, Mississippi, in 1901. I mention that by way of explaining that history and education are as important to me as drinking water or breathing air.

ArtsATL: Do you think that young people today are as aware of Paul Robeson and what he meant?

Brooks: No. There are a couple of reasons why. First, the concerted effort to erase his memory that happened in his lifetime. His books were taken off the shelves; his records were not played; he was vilified by the government.

The other part of it is that in this country we can’t remember what happened last week. When one looks at some of the finest people this nation has produced, we cannot tell the story of this country without talking about people like Paul Robeson. That’s the responsibility not just of the theater, not of the schools, not of the community, but of everyone. It is our responsibility to tell the stories and keep repeating the stories about the struggle. And Paul Robeson is one of them.

ArtsATL: Does the play go into his mental breakdown and suicide attempt?

Brooks: No. If you think about the theater, one of the questions when a public figure has been launched to us is: What are our responsibilities in terms of theater? What do we want to do in this story?

When we think about Paul Robeson, we have to think about not just a magnificent American, but a world figure. He had audiences with heads of state. He was talking about apartheid in 1947. He talked about the embracing of mankind, the elimination of oppression, which we are looking at right now. I can celebrate all those things. This is not a mimicking of Paul Robeson. This is a portrait of one artist to another.