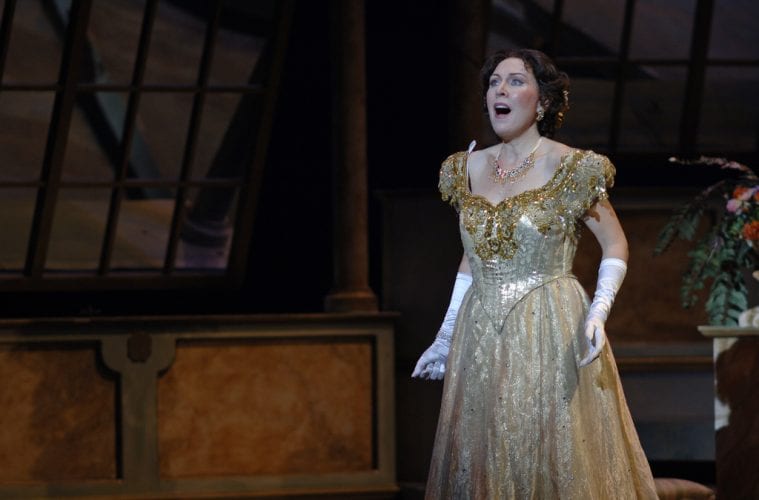 Preview: In a season of transition, Atlanta Opera turns to classic beauty of Verdi’s “La Traviata” 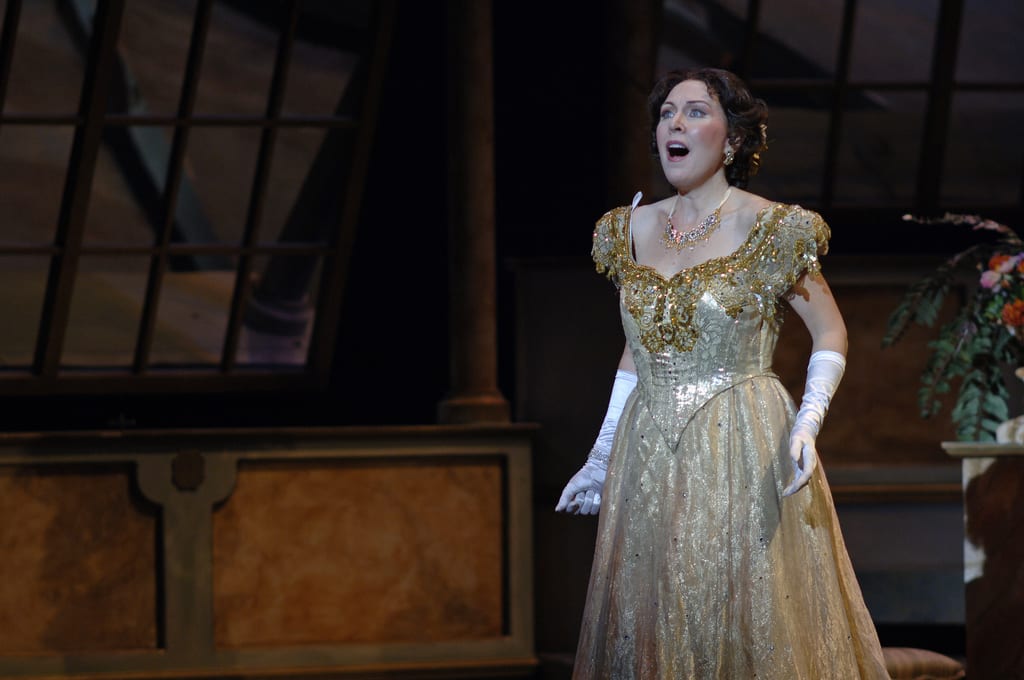 “La Traviata,” one of Giuseppe Verdi’s greatest achievements and one of the most popular operas of all time, is coming to the Atlanta Opera beginning March 2. Based on a once wildly popular novel by Alexander Dumas, it’s the story of Violetta, a wealthy courtesan and socialite in the Paris demi-monde of the mid-19th century. She gives up everything to experience true love with Alfredo, a young nobleman, but his father forces them apart, with dreadful consequences for everyone. Verdi’s score is amazing for its sweeping, seamless beauty and for the wealth of material it contains.

The role of Violetta will be sung here by American soprano Mary Dunleavy, making her Atlanta debut. In 2009, I heard her at Glimmerglass Opera in the same role, and I remember her distinctive, lustrous sound. She was especially strong at the top of the register, not surprising considering that she was more or less a “Queen of the Night” specialist for several years before settling into lyric soprano roles. (The “Queen of the Night,” in Mozart’s “The Magic Flute,” is a stratospheric coloratura role attempted by only a tiny number of sopranos.) There was also, I have to add, an occasional edge to her voice, likely the result of singing all those “Queen of the Nights.”

That was a few years ago in a small, acoustically delightful house. So it will be interesting to hear how Dunleavy sounds now, with the passage of time and in the less forgiving confines of the Cobb Energy Centre. (By the way, Dunleavy makes a cameo appearance in the hit movie “Lincoln,” singing Marguerite, a role she will return here to sing next year.)

Russian tenor Boris Rudak will be making his American debut here as Alfredo. Most of his career to date has taken place at the Bolshoi Theatre in Moscow. Baritone Weston Hurt will sing the role of Germont, Alfredo’s father. Hurt portrayed Sharpless in “Madama Butterfly” here in 2008. When he sang Germont in Seattle, critic Bernard Jacobsen described him as “a balm to the eye, ear and mind.”

Intriguingly, the conductor will be Joseph Rescigno, whose connection to the Atlanta Opera revolves around Dennis Hanthorn, the company’s general director until his awkward departure last August. Rescigno and Hanthorn were the creative team behind the Florentine Opera in Milwaukee, working together for years before Hanthorn accepted the position here in 2004. Hanthorn invited Rescigno to conduct the Atlanta Opera’s double bill of “Pagliacci” and “Carmina Burana” in 2006.

One of the Atlanta company’s many transformations during the Hanthorn regime was the appearance, on various occasions, of productions (sets, costumes, lighting and stage direction) that reflect modern stagecraft and go beyond the musty productions of yesteryear. “Lucia di Lammermoor” in 2011 and “The Golden Ticket” in 2012 were examples of this. “The Golden Ticket” might have been a disaster as an opera, but the production was something of a benchmark for the company. This has not been a consistent experience, however, and for the past few seasons the opera has more often, for economic reasons, trotted out productions like granny used to watch. She might even have seen them, as many were recycled from the old days.

This season’s first opera, “Carmen,” was a hybrid, with fairly basic sets and costumes, livened up by a husband-and-wife director-choreographer team (Jeffrey Marc Buchman and Rosa Mercedes) with some interesting ideas. While Buchman’s staging the opera from Don Jose’s point of view was a stroke of genius and made perfect sense dramatically, Mercedes’ determination to turn the entire evening into a dance-opera was a bit heavy-handed and became a distraction. Still, it was good to see an effort to get beyond the most basic of productions, and it was an example of Hanthorn’s talent for getting maximum bang for minimum buck (this season was planned out by Hanthorn before his resignation).

For “Traviata,” the company will use the sets originally built by Claude Girard and Bernard Uzan for Opéra de Montréal, which retired them and sold them to Atlanta for the company’s last “Traviata,” in 2005 at the Boisfeuillet Jones Atlanta Civic Center. The stage director will be David Gately, who directed “La Bohème” here in 2010.

Behind the scenes, this has been an interesting season for the Atlanta Opera. Hanthorn’s departure was not announced until the story leaked to The Atlanta Journal-Constitution’s Howard Pousner. William E. Tucker, the opera’s board chairman, said in an interview with me that this was a “normal transition,” but obviously it was not. Hanthorn was not leaving to take a position elsewhere, and the company had no successor in mind. People there became defensive and secretive about the matter.

A search for Hanthorn’s successor was finally engaged after Thanksgiving, and spokeswoman Cristina Herrera indicated last week that the company expects to make an announcement in April regarding a new director. Meanwhile, three members of the opera’s senior staff have been managing things, assisted by Ann Owens, who worked as a senior administrator at the Houston Grand Opera for many years before serving as that company’s acting director when longtime director David Gockley left to head up the San Francisco Opera.

Houston’s experience since Gockley left could serve both as a warning and a sign of encouragement for Atlanta. In the years before his 2005 departure, Gockley built it into one of the most admired opera companies in America, hosting a healthy number of world premieres and interesting productions of the classics. Other key staff members departed soon after Gockley, however, and the opera was soon racking up deficits and retreating to revivals of its most conservative productions.

Another director came and went. Last year the company settled on a trio of leaders, with Patrick Summers as artistic director. Lately things have been looking up, with an impressive network of high rollers willing to pitch in. Houston has announced a seven-opera schedule for next year that includes four new productions, a major world premiere and Wagner’s massive “Tristan und Isolde.” A Wagner “Ring” cycle is being planned a few seasons out as well.

Houston’s annual budget hovers around $20 million. Atlanta’s, in comparison, is a bit more than $5 million. Houston’s metropolitan area had a population of 5.9 million in the 2010 census, versus 5.2 million for Atlanta.

Hanthorn, who before coming here had ranked Atlanta among the three most “underperforming” opera companies in America’s major cities, clearly hoped to build it into something more appropriate for a city our size, much as Gockley did in Houston. He accomplished a lot in his eight years here, though the recession obviously took its toll.

No one has been willing to speak candidly about the reason for Hanthorn’s departure, but Tucker referred to a market research firm hired by the opera’s board, which recommended a focus limited to “the top 30 pieces in the global opera repertory.” That obviously would not have gone down well with Hanthorn, who spoke of the importance of new works and new audiences, as well as modern productions of standard operas. Apparently the situation was exacerbated by the failure of “The Golden Ticket,” which tanked at the box office, causing losses great enough to imperil the company had it not been for a $9 million bequest from the estate of Barbara D. Stewart in early 2011.

It would appear that the board has settled on a “flight to safety.” If so, the company’s solvency is probably assured for a while. But for an arts organization, perversely, too much safe repertoire can be dangerous. There seem to be no examples in our era of opera companies that grew big and strong by turning themselves into museums, cranking out only warhorses from a narrow list.

Much depends both on the next leader and the direction the board takes. There is substantial work to be done in the developing an audience and more serious financial support. The Atlanta Symphony Orchestra is an example of how to do this right, but it’s also a formidable competitor, both for financial resources and as a presenter: some of the city’s most interesting opera nights of the past few years have been the ASO’s semi-staged productions, especially of John Adams’ operas.

The ASO has an annual budget exceeding $40 million. By comparison, the Houston Symphony Orchestra’s budget is about $20 million. The purpose of citing Houston is not to suggest that it is some sort of model for Atlanta. It’s just to point out how different the ratios are here compared with places where opera is thriving.

For now, the Atlanta Opera is in the black. Subscriptions this year are up 12 percent over last year, as is ticket revenue, according to Herrera, who added that ticket sales for “Carmen” were second only to “Porgy and Bess” as the company’s best ever. In 2010, the company reduced the number of mainstage productions from four to three, and that has become the status quo, with next season already announced.

“La Traviata” will be performed on March 2, 5, 8 and 10 at the Cobb Energy Performing Arts Centre.

And before you head for the performance, it always makes sense to prepare by listening to a recording. There are many to choose from, but my favorite is the fabled “Lisbon Traviata,” originally a bootleg tape of a 1958 live performance with Maria Callas and Alfredo Krauss, made famous in Terrence McNally’s play. Although past her peak, Callas was still in good voice, Krauss was her most elegant tenor, and the dramatic quality of the performance simply leaps out from the speakers. You can purchase it as an mp3 download for $2.97 at Amazon, making it one of the great bargains in the entire record business.

An eccentric alternative is the 1946 NBC Toscanini version with Licia Albanese and Jan Peerce, taken at an astonishing breakneck pace that probably could not be attempted at a major house in today’s conformist climate. The sound quality reflects the vintage, but there’s an energy level here unmatched anywhere else. This one is also available as an mp3, though it will set you back a bit more.