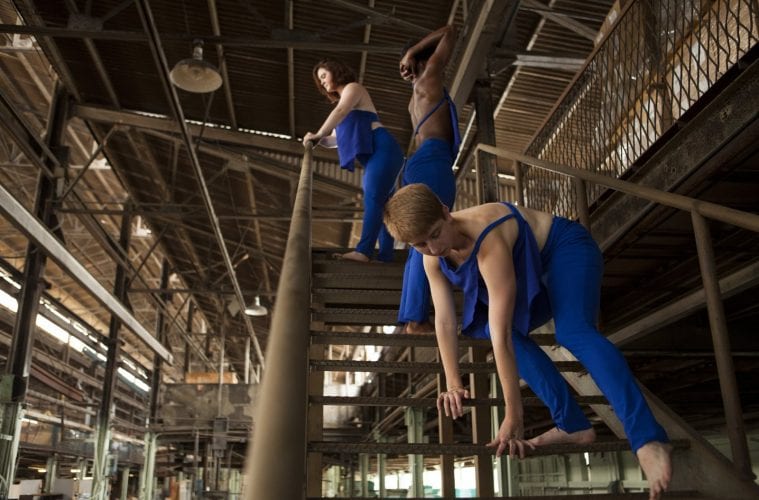 Choreographer/dancer MaryGrace Phillips is one of the rising stars in Atlanta’s burgeoning independent dance scene. Now a resident artist at The Lucky Penny’s Work Room founded by Blake Beckham and Malina Rodriguez, Phillips received the 2015 Emerging Artist Award from the City of Atlanta’s Office of Cultural Affairs. She is also a 2016 Hambidge fellow, and a writer for ArtsATL.

Her new production, {stairs}, begins a four-night run tonight at the B Complex building in southwest Atlanta. Phillips describes it as the creation of a dream world that looks at reconciliation through combining the language of poetry and movement.

In this Q&A, Phillips talks about her latest project, how she got into dance and the challenges of being an independent choreographer in Atlanta

ArtsATL: What is the concept behind {stairs}?

MaryGrace Phillips: The general concept behind {stairs} is boundlessness — space without time. In my life and emotions I mostly feel a scarcity of time — its limitations, time running out, the ends of things — even though I think that time is a construct of linearity and not an actual “thing” that exists outside of our perception. If time (as we live it) ends, then does that also change love (as we live it)? It’s something that I couldn’t stop thinking about.

We’ve also woven into the piece this idea of reconciliation — the act of returning to someone or something after wrongs have been done. It’s a deep humility to embody change enough to go back to that someone or something and relearn to be there. I think it’s deeper than “I’m sorry.” Perhaps it’s “I love you,” but it’s the “I love you” that is beyond the love within our quotidian sense of time. At least, that’s what we’ve explored in this dance. 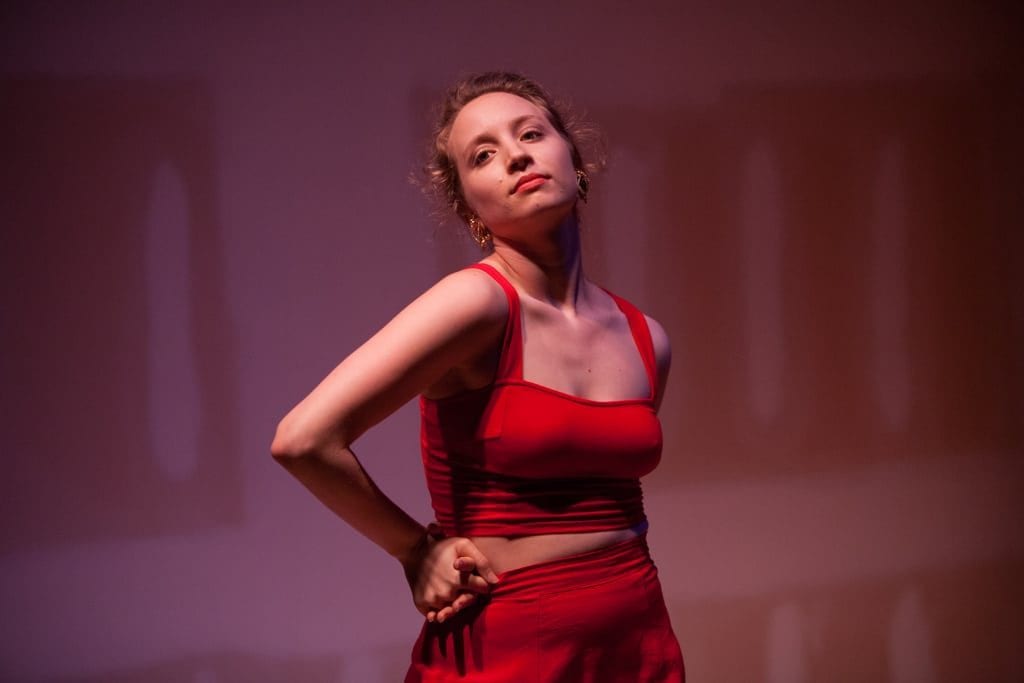 Phillips dances in her piece Honey, You Know Where To Find Me in 2015. (Photo by Jessica Pinkstone)

ArtsATL: What are the challenges in merging two very different art forms, poetry and dance, into a cohesive movement piece?

Phillips: It doesn’t feel challenging to me; in fact, it feels natural to me. I am attracted to the poetic value in the things I experience, and this has led to a creative process that builds from and with an idea of poetry. Poems are often externalized by someone’s voice reading it out loud, making it more sensual and full. I think that movement is my version of reading aloud.

Reading has always been my first love and the way that I sponge up the world, and movement has been how I express outwardly. So it makes sense that what I make is usually an intersection of these languages.

ArtsATL: You’re part of The Lucky Penny’s Work Room collective and one of the other resident artists there, Anicka Austin, is in the cast of {stairs}. How has The Lucky Penny’s rehearsal space, and the creative atmosphere it seems to foster, informed your work?

The space has become a crux to my work and to our community. Blake [Beckham] and Malina [Rodriguez] have such an incredible value system, and they wholeheartedly support us with this space, the processes and the learning around it. I still walk in there with a feeling of disbelief: I have a key to a studio. Not some shitty hole-in-the-wall closet in the back of someone’s grandma’s restaurant, but a completely beautiful, clean, safe haven of creative space with books, a record player, beautiful light, a brand new floor. It constantly invites me to soften and linger, which I find are creative necessities. It has given me space to commit to my own growth as a person and an artist, and it asks me to regularly commit to that growth. And so I grow. I can easily feel isolated in work, and it’s encouraging to have all of these talented artists thinking and working in the same space. It has created a supportive container that is definitely a big reason why I’m still in Atlanta. 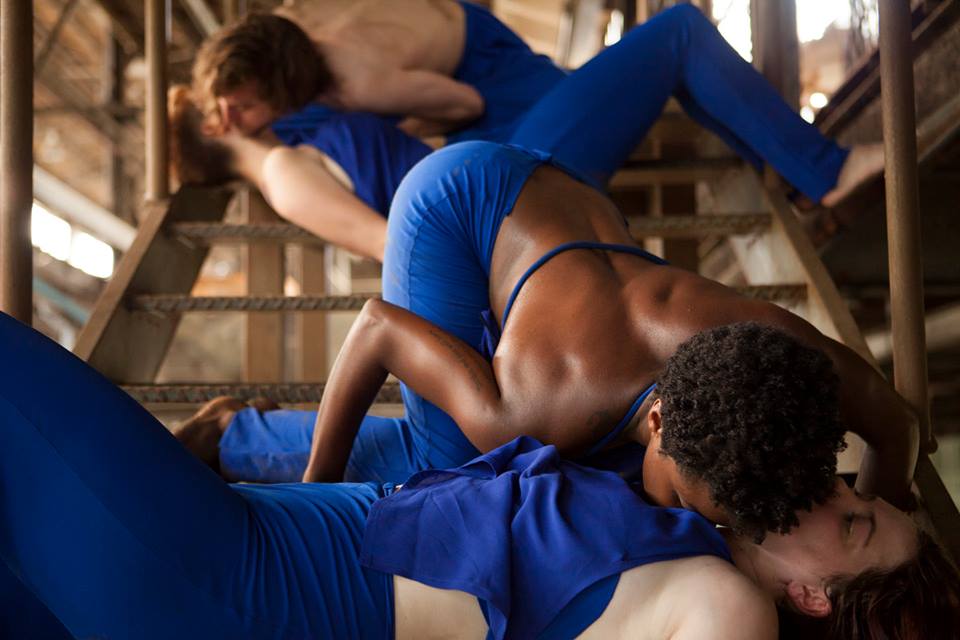 ArtsATL: How did you first become interested in dance? And how did that translate into a focus on creating movement, in addition to performing it?

Phillips: When I was little, MGM musicals were my film genre of choice (and where my film preferences intersected with parental rules). I was constantly learning off the videos, singing and dancing around the house, and commanding my younger siblings to dress up and perform shows in the living room. I asked to be a dancer so my mom enrolled me in a class. Although at the time I thought that meant I would grow up to be a 1950s singing movie star.

At the end of high school, I got injured which resulted in a lot of identity confusion around dancing, performing and my body. I showed up to college as a dance minor in an inflatable boot, five days after having surgery. Later, when I was proposing my B.F.A. thesis, administrative logistics prevented me from performing; and I started to take the choreography role more seriously.

I would say that life steered me really hard into the direction of a maker. If everything had gone according to my original plan, I would have ended up in a full-time company somewhere, but everything I tried to pursue solely as a performer never worked out. So in order to keep doing dance I had to expand my ideas around what kind of artist I was. This version now is much more like the me that I was chasing. I feel more powerful and excited by the roles that I operate in now.

ArtsATL: What are the challenges of being an independent choreographer and movement artist in Atlanta?

Phillips: I think one of the main challenges is that there is not a density of opportunities, institutional support or dance-presenting organizations. A lot of the opportunities are self-made and self-supported. Up until last year, there also wasn’t viable, affordable studio space to make work on a regular basis.

As an independent dance artist, nearly every time you make and exhibit work you have to also build the floor, fund, fix and maintain the space in which it can happen. That’s a lot for one individual. It’s like a painter having to rent out or build a gallery every time they want to show their work. It’s very demanding and expensive. It can begin to feel hopeless or masochistic because it’s very easy to finish an artistically compromised show (in the artist’s mind) with way less money than you started with.

But I will say, I’ve been able to make work that I’m really proud of in Atlanta with some of the best people. What the city lacks in resources around dance, it makes up for in tenacity and relationships, which is how we keep making each other’s shows happen.