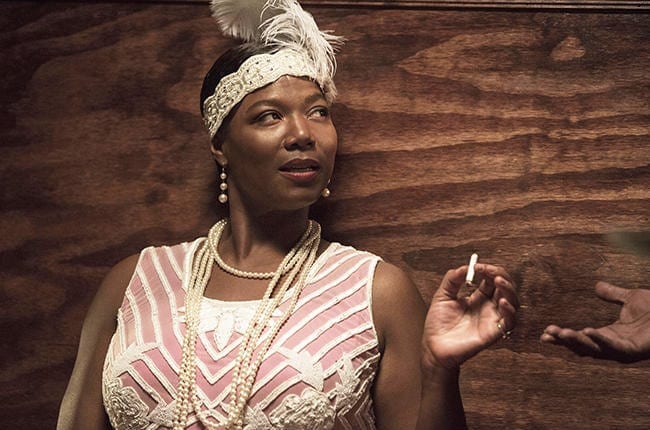 Queen Latifah waited years to play the “Empress of the Blues.”

It took more than two decades to actually get it made, but the long wait was Georgia’s gain. After a premiere last week in Atlanta at the Rialto Center for the Arts, the locally-shot Bessie debuts Saturday on HBO.

Bessie was filmed almost entirely in Georgia including more than 27 locations in Covington, Conyers, Duluth, Marietta and Woodstock. One of the unmistakable locations is the Fox Theatre, which the crew used for four nights.

Roughly 23 years ago the producing team of Richard and Lili Zanuck came across the story of Bessie Smith, one of the pre-eminent blues artists of the 1920s and ’30s. A script by legendary writer Horton Foote in hand, they were looking around for “who in the world could play her,” says producer Shelby Stone.

Richard was watching MTV, saw Queen Latifah and knew “this is who it is.” They tracked down the then-almost unknown performer — who didn’t even have an agent at the time — and it all fell into place. The project moved around from studio to studio until seven years ago when it landed at HBO, where it went into development. Dee Rees, who had a mainstream hit with 2011’s Pariah, was asked to tweak the script and eventually became the director.

Her take on Bessie highlights the rocky professional and personal life of the Southern artist, who paved the way for the likes of Billie Holiday and Aretha Franklin and performed regularly in Atlanta. Besides Latifah, the film also stars Oscar winner Mo’Nique as Ma Rainey and Michael Kenneth Williams (The Wire) as one of Smith’s beaus.

Rees’ mother and grandmother grew up listening to Smith, and that’s how she was exposed to Smith’s music. When HBO asked Rees to help rewrite the script, she jumped at the chance. She knew it was vital to show all of Smith’s layers. “It was a chance for me to have a different take on this woman, to show something that hasn’t been seen,” Rees says. “I wanted to get behind the anecdotes and understand the why of who she was, not just what she did.”

HBO supported her as she took the film to places they might not have expected. “It’s not a history lesson and it’s not an eat-your-broccoli kind of film,” says Rees. “Here is this woman from a small town in Tennessee and we’re still talking about her today. Long before there was a name for it, she was a radical feminist. Her music was an example of empowerment. She chose her own path and excelled at it. She was defiant.”

Rees did a ton of research, printing out all of Smith’s music. Her goal was to find songs that mirrored the artist emotionally, ones that were a statement of who Bessie was.

Making a living as a singer in her time was far different from what it’s like today. Stone regards Smith as a pioneer. “For better or worse, (she and artists of the time) ran their own businesses around their own art. You didn’t have the sophisticated record businesses where they groomed artists, taught them elocution, gave them scripts and packaged their images. These women wrote their own songs, ran their own road shows and ran their careers their way.”

Although Smith was the biggest-selling black artist of her day, she had a narrow audience. “It was Jim Crow America and she lived and worked in an all-black world,” says Stone. “You could strive and survive and she was happy with just that.” It wasn’t until the mid-’30s when Smith began crossing over to white audiences.

True to what Rees and Stone wanted, the film doesn’t sugar-coat the main character. Stone calls Smith unvarnished, with a huge appetite for men and women, booze and food. “She was a precursor of every bad girl in rock and rap,” he says.

What impressed both women is how Latifah stuck with the project and never gave up hope as it sat in limbo. If anything, she was even more ready when it was green lit. “She has said that as a fully grown woman, she can bring more life to it now than when she auditioned 22 years ago,” says Stone. Latifah brings a fiery charge to Bessie Smith, but Mo’Nique almost steals the movie as Ma Rainey. Rees knew she needed someone powerful to go up against Latifah. “Ma’s power in life was a leaning-back power versus Bessie, who gets hers from charging forward, and moving ahead,” she says. “Mo’Nique was great because she has this self-possessed, confident energy. We needed someone who could tell Bessie something, and Mo’Nique could get in Queen Latifah’s face with almost a motherly confidence.”

The flexibility of shooting in Georgia was an appeal for Rees. “The only other place we could have shot was in New Orleans but the producers had shot here before (including Kenny Leon’s remake of Steel Magnolias and the TV series Single Ladies) and had good experiences,” she says. “We shot on the outskirts of Atlanta a lot. Atlanta has rural areas but there are also places that have ’20s architecture with a New York feel.”

According to Lee Thomas of the Georgia Department of Economic Development, the production generated more than $16 million in economic impact to the state and employed nearly 1,700 Georgians, including actors such as theater veteran Joe Knezevich, who plays a Columbia Records bigwig intent on signing Smith to a contract.

It’s a high-profile project for a state that has gotten used to high-profile films such as The Hunger Games, The Fast and Furious and the Divergent franchises.

With its tax incentives, film production has taken off in the state. Georgia is now regarded as the new Hollywood, and Thomas has noticed that actors and film crew members are moving to the area from Los Angeles to get more work.

The industry brought $5.1 billion into 2014’s economy, versus $244 million in 2007. “It’s quite a bit of growth,” he says. “We have sound stages that have been built here and support service companies have relocated in the state. It’s been a huge boom for the economy.”

The state has reached a point where crews want to work here repeatedly. “Most of our productions are from studios or people who have already shot here,” says Thomas. “Most people who shoot here have a great time and want to come back. They can find a crew and infrastructure and they like the quality of life here. It’s an easy sell.”