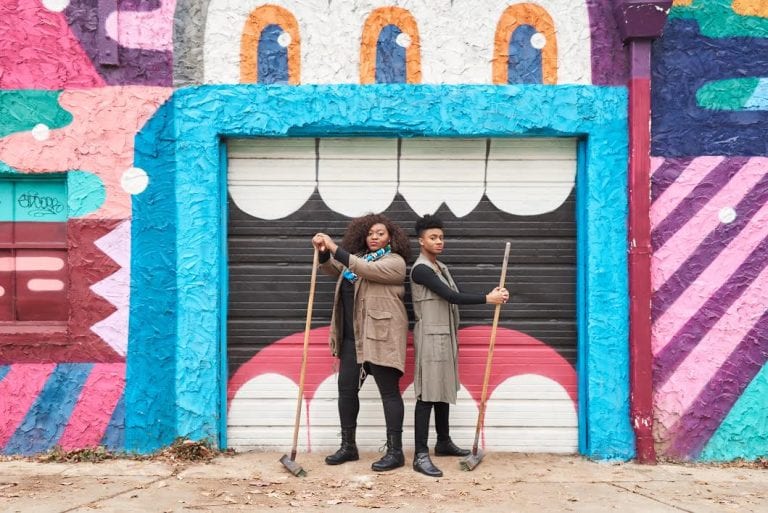 On January 21, people watched awe struck by women marching all across the world. On every continent, they marched for reproductive rights, to end genital mutilation, stand against domestic abuse, speak up for victims of sexual assault, defend the right to life and a slew of other causes and issues facing women and girls. Regardless of race and nationality, they marched in the name of equality.

In a Gotham-like place with a political climate much like the present, women have also taken to the streets in the name of moral justice. This is the crux of Georgina Escobar’s world premiere comedy Sweep, onstage at Aurora Theatre February 10–March 5. Sisters Siri and Luna travel from the present throughout different periods of time with brooms sweeping away moral wrongs. They start in the future and travel back to when Adam bit the apple (yes, Adam), to Noah collecting DNA samples and to an introspective, cannabis-fueled conversation on a fishing trip between John the Baptist and Peter. What if the snake tempted Adam, and he blamed the whole thing on Eve, thus spurring centuries of imbalance between the sexes? What if God’s ego got in the way and he sent women to do his dirty work? Escobar offers a nontraditional take on Biblical and mythological stories by asking the audience to consider an alternative narrative.

“I suggest that Eve is first because she’s a part of nature, and it seems to me that a woman would give birth to something else,” Escobar says. “As far as who bit the apple, there’s a balance in the play that’s disrupted, and that disruption has stalled the evolution of humanity because one of the two partners is trying to be on top.”

The playwright, 36, grew up on the Texas–Mexico border in Ciudad Juarez, Chihuahua, Mexico, and started her theater career with intentions of being an actress, studying at Stella Adler Studio in New York. But she transitioned to playwriting out of a desire to “tell bigger stories” and went on to get her MFA in dramatic writing from the University of New Mexico in Albuquerque. She describes her style as more Ibsen than Chekov and takes inspiration from Tony Kushner, Paula Vogel and Sara Ruhl to create other worlds.

“Stories that are boiled in a place of conflict always or tension always inform the way artists from those regions write, speak, think and paint,” Escobar says. “I tend to write stories that are a bit askew where we are walking not on this ground.”

Sweep, directed by Abigail Vega, is a part of Escobar’s Wayfoot series of plays, graphic novels and albums, and there are three volumes in progress. After Sweep, the playwright returns to Aurora, April 7–30, to direct Nilo Cruz’s Pais de Bicicleta/Bicycle Country as a part of Teatro Aurora where plays are performed in Spanish with English supertitles.

Escobar describes Sweep as a “strange imagining” and hopes that audiences will feel hopeful for humanity after watching the play.

ArtsATL: What inspired you to write this play?

Georgina Escobar: The inspiration and the inception have two different entry points. In short, it was a project I started working on at The Brooklyn Generator where a group of six writers get together and write a play in three weeks. I knew that I wanted it to be a speculative evolution feminist piece. When I came to the first Brooklyn Generator Sweep meeting, I had a list of titles that activated something in me. Sweep, Flush — when I spoke to the women in the room, they said that Sweep sounded interesting. I go for a gut instinct at the tip of the tongue, and then I see how it moves within other people.

ArtsATL: There are a number of Biblical characters in the play. How did you decide which ones to include?

Escobar: I knew if I included characters from the New Testament, or more common references, that people would come in with preconceptions. To me, John the Baptist is incredibly interesting, and there’s a painting by Leonardo Da Vinci of John the Baptist where he is pointing upward that has always haunted me. Peter is the same way. Adam and Eve are just because there’s creation versus evolution and I don’t think those things should be adversaries, and I play around with that idea. I’m not playing at teaching people about the Bible, it’s the opposite. I’m playing at retelling the stories that we tell and whether we can imagine them differently.

ArtsATL: How did your own religious experiences inform the writing of this play?

Escobar: I grew up in northern and central Mexico, and I went to Catholic school. I was lucky to receive an education where questions were a part of our growth and the nuns paid very close attention to our questions. My family is also very spiritual, and my grandmother said before you have a firm decision about your religion, you have to learn about all of them, so I did. I was hungry to learn where our common threads lie, and those common threads are a lot of what Sweep pokes fun of, and where the play finds its strength.

ArtsATL: Siri and Luna are traveling through time with brooms as weapons for cleaning up moral wrongs. Why the broom, and what does that broom mean to you?

Escobar: There are many layers to that. There’s the huge connotation of witchcraft. Then, there are women who clean homes, women who are in labor. The broom has been a symbol of women being misunderstood, or not being able to show their full potential because the broom defines them in a way. To me, it’s also the idea of the splinters, since I’m speaking of splintered universes and splintered worlds. Also, my last name is Escobar and in the plains of Spain the coat of arms for my family was five brooms in the shape of a pentagon, so my legacy has something to do with brooms. What is this instrument that we use to clean and pick something up? And, when did someone come up with this idea? I have to believe that a woman invented the broom.

ArtsATL: In Aurora’s production, Luna and Siri are played by black actresses. Did you write this with Latinas in mind to play those roles?

Escobar: I have gone back and forth. Because I’m Latina, everything I write is inherently Latino, but I also have to pay close attention to my collaborator’s needs. I have to write things that create more space and visibility for my people, but in the cast breakdowns it’s important that the women are women of color and gender neutral. It didn’t matter as much which culture or nuance. We did a reading in New York where the two women were Jewish women. Having the experience of being marginalized is more important than a specific ethnicity. I just saw the rehearsal with Luna and Siri being black and it read beautifully.

ArtsATL: The play has a decidedly feminist lens, but there are different definitions. What is feminism to you?

Escobar: I don’t know yet and that’s why I’m making the characters do my dirty work. I think it’s evolving and growing and there are many definitions. I am not one who is prone to sticking to just one thing. The closest I come to a definition is in one of Eve’s lines when she talks about equality and balance. It’s about believing that there are no superior systems between the humans on this planet, especially men and women. Maybe I’ll figure out a definition after 500 plays.

ArtsATL: What message do you want audiences to take away from the experience of seeing Sweep?

Escobar: I really want to plant a seed of understanding and wanting to explore American mythology. We depend on our Greeks and ancient history to justify a lot of our adaptations. I want the literati to start thinking about American myths. And, for the younger audience members, I want youth to feel a sense of empowerment. Yes, humanity has made mistakes. We are impermanent, imperfect and incomplete, yet life is about living it. No outside forces can really be the one that is in charge of bringing you down. The secret to our evolution is remembering that living is a gift.