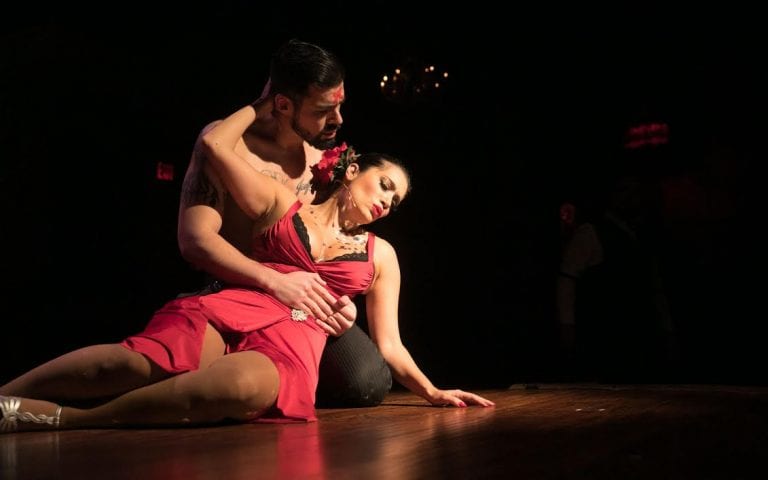 This past Thursday, the Atlanta Opera opened its latest Discovery Series production, María de Buenos Aires, at La Maison Rouge inside Paris on Ponce. The Eastside burlesque lounge proved an ideal alternative venue for the two-act tango operita by famed Argentine composer-bandoneón player Astor Piazzolla and Horacio Ferrer, a Uruguayan-born poet, broadcaster, reciter and tango lyricist. With a total capacity of only 200 seats for each show, the entire run of six shows was sold out for months.

Maria was portrayed by soprano Catalina Cuervo, who was absolutely on-target ideal for the part and has performed it perhaps more than any other singer. While billed as soprano, she has the solid, smoky low-end notes demanded by Piazzolla’s melodies. Cuervo was well-balanced and supported by the performances of her fellow cast principals: actor and tango singer Milton Loayza as El Duende — in South American mythology, a goblin-like spirit whose powers cause the young to forget their way home, here cannily portrayed as a barkeep — and baritone Luis Orozco as El Payador: a singer and improviser of payadas, or folk songs, and Maria’s spiritual and physical lover in life and death. All three are veterans of other María de Buenos Aires productions; all made their Atlanta Opera debuts with this one.

The principal cast was rounded out by an ensemble of six additional singers, plus the dance duo Tango Axis (Jeremias Massera and Mariela Barufaldi) who performed and choreographed. The chamber orchestra, led by conductor Jorge Parodi, featured esteemed Argentine composer-bandoneón player Daniel Binelli, who played in groups with Piazzolla, and New York pianist Polly Ferman, along with nine musicians from the Atlanta Opera Orchestra.

Tomer Zvulun, the opera’s general and artistic director, staged the show as immersive theater, taking advantage of La Maison Rouge’s innate “red velvet bar” character to emulate that of a Buenos Aires tango bar and surround the audience with action at close range. The intimate approach and the venue’s evocative ambiance truly lent power to the performance.

While speakers of Spanish, especially those familiar with words from the local Lunfardo dialect, can revel in the multi-hued richness of Ferrer’s original libretto, Zvulun’s streamlined English supertitles afforded narrative immediacy to those in the audience not conversant in Spanish nor familiar with the culture and slang of Buenos Aires’ urban underclass.

Although Piazzolla and Ferrer first met in 1955 after the composer returned from Paris, María de Buenos Aires, which premiered in 1968 in Buenos Aires, was their first collaborative project.

The story focuses on María, who “was born on the day God was drunk,” a suburban girl who is seduced by the tango and the allure of Buenos Aires’ bohemian nightlife and shadowy underground culture and becomes a prostitute.

On the surface María can be taken as an individual character, but she is symbolically, metaphorically more: by extension, she is an archetype of the many young women who escape impoverished villas miseria of the provinces, hoping for something if not better then at least different and more exciting among the “porteños,” the city dwellers, only to be trapped in a different social miseria of poverty and suffering.

María is also a metaphor for the city itself. Alternative names range from “The Queen of the Plata” to “The City of Fury” in one tango song. The original name of Buenos Aries was “Ciudad de Nuestra Señora Santa María del Buen Ayre” (“City of Our Lady Saint Mary of the Fair Winds”), and Catholic Marian religious allusions abound in the opera, as in a parody of Luke 1:42 when El Duende says, “De olvido eres entre todas las mujeres” (“Forgotten art thou amongst all women”).

The dark allegory is not only that it is María’s shadow that walks the city’s streets in Act Two, but it is also the shadow of Buenos Aires. “Everyone carries a shadow,” wrote psychoanalyst Carl Jung, “and the less it is embodied in the individual’s conscious life, the blacker and denser it is.” The shadow contains not only the personal shadow but also that of society and its neglected, repressed collective values. Thus the larger meanings implicit in Ferrer’s “Forgotten art thou . . .” and later “Preságio eres . . .” (the Spanish being more pregnant with meaning than any English translation about mere omens).

In the end, there is an absolution of a sort: in death Maria’s virginity is restored, then her shadow becomes pregnant and miraculously gives birth to a girl — perhaps herself, perhaps another like her — and the opera ends as the ironic cycle begins again, reborn in the unconscious cultural passions of a new generation.