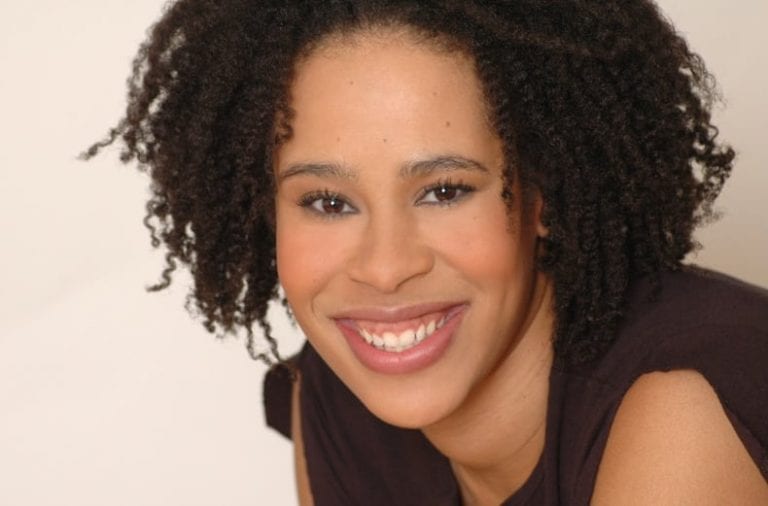 Dominique Morisseau based characters on her family and friends.

When Detroit native Dominique Morisseau wrote Detroit ’67, she sought to humanize history by telling the stories of her family and community using the colloquialisms of the people where she grew up.

The action of Detroit ’67 takes place in the basement of the Poindexter family home, where brother and sister Lank and Chelle throw after-hours “rent parties” to keep the bills paid. Their friends Sly and Bunny are there to make sure the basement is packed every night and to keep Martha and the Vandellas, the Four Tops and Smokey Robinson playing on the 8-track machine.

But Chelle and Lank have conflicting ideas on what to do with the money. Lank and Sly want to invest in a bar; Chelle wants to pay off the mortgage and keep her son Julius in school at the Tuskegee Institute. To complicate matters, the arrival of an elusive white woman named Caroline stands to stop the music and puncture the family dynamic. With the city erupting into riots because of police brutality, the sounds of Motown may not be enough to keep the Poindexter family in tune.

Detroit ’67 received the 2014 Kennedy Award for Drama and will be presented by Kenny Leon’s True Colors Theatre Company at the Southwest Arts Center February 10 through March 8.

On Saturday, February 14, Morisseau will participate in a postshow discussion moderated by Pearl Cleage, the Alliance Theatre’s playwright in residence.

Morisseau aims to be the scribe for her city, and she is doing for Detroit what August Wilson did for Pittsburgh. Wilson wrote a 10-play cycle about Pittsburgh’s Hill District, covering each decade of the 20th century. Morriseau started writing Detroit ’67 in 2010, and at the time she did not think that a play that digs into policing black communities would ring so true for audiences. However, sibling relationships, riots, racial tension, urban renewal and police brutality collide to make a play set in 1967 seem much like the headlines of 2015.

ArtsATL: What made you want to tell this story?

Dominique Morisseau: I had just gotten into the Public Theater’s emerging writers group, and I had pitched a three-play cycle that would start with Detroit ’67. I wanted to write a three-play cycle on my hometown to explore what I think are three important eras in shaping the city’s landscape. The riots were something that I had never really learned about, and I wanted to make it something that we could revisit and learn from. I also wanted to contribute a different narrative to the city other than the one the media has portrayed. The Detroit that I know is family, love and good, hard-working people. I wanted to honor them in all of their dimensions in my story.

ArtsATL: Are any of the characters based on people you know?

Morisseau: Every character I write is based on someone, but none of the characters in the play are completely true to one person. Lank has elements of my brother. Chelle has elements of my mother. Bunny reminds me of an aunt; and when my cousins saw the play, they knew exactly which aunt.

It’s funny, Lank and Sly remind me of my dad and his friends when they were younger. My dad is older, and he’s the only one left of this group of black men that he used to hang out with, so in some ways I’m giving my father his friends back.

Morisseau: I don’t feel like I directly drew inspiration from Lorraine, but she did influence my generation of playwrights, so I can’t deny her influence on me as an artist. However, my direct inspiration for this play is Pearl Cleage. There’s something about the way she writes women — she does for black women what August Wilson did for black men. She captures them in the most beautiful and complicated ways.

ArtsATL: Detroit ’67 is the first play in a three-play cycle. What are the other two plays about?

Morisseau: Paradise Blue takes place in the 1940s, and it’s looking at the jazz community in Detroit’s Black Bottom–Paradise Valley area. The play examines what happens to this group of jazz musicians that are beholden to this one jazz club when the city is on the brink of urban renewal.

Skeleton Crew takes place at the beginning of 2008 before the Big Three [Ford, General Motors and Chrysler] collapsed. It’s looking at a makeshift family of workers at a small plant in Detroit, and what happens when they hear the news that the plant closing.

ArtsATL: The characters Sly and Lank are constantly talking about being harassed by the police. Is this something you included in the play as a response to Trayvon Martin, Sean Bell and Oscar Grant?

Morisseau: This play was written in 2011, so it was not intentional. Art does that sometimes; it falls right into the conversation. The relationship between the community and the police is what caused the riots in 1967, and I am disappointed that history repeats itself so much. It’s a statement about how little things have changed since 1967 that you can draw so many parallels between my play and what’s happening in Ferguson and New York. The play should have never been this current.

ArtsATL: The “n-word” is used a lot in this play. Why did you choose to use it?

Morisseau: I usually never use this word in plays. I always try to find another word for how black people describe each other. I got to a point in my writing where nothing else worked. I was censoring myself as a writer by not letting my characters speak for themselves. I researched and started talking to my parents, and I asked them to just be with me in a basement in 1967 with [their] friends. What would [they] say? My mother’s hilarious answer was, “Well, the bad girls would say ‘nigger.’” They didn’t want to admit to me that they used the “n-word.”

I was thinking about my responsibility as an artist, and I know that to my elders, it may hit them wrong because they have worked so hard to bury that word. But on the flip side, I have to not try to correct my people, but rather let them see themselves reflected back to themselves, and then they can make the choice to do something different.

ArtsATL: What do you want audiences to take away from this play?

Morisseau: I don’t know what they are going to take out of it. All I know is what I put into it. My hope is to change the narrative about the city. Nobody is all good and nobody is all bad. I hope the humanity of Detroiters is what speaks the loudest in my work. I choose my characters from a place of love, and to me this is a love song to my city and to the people I grew up with.