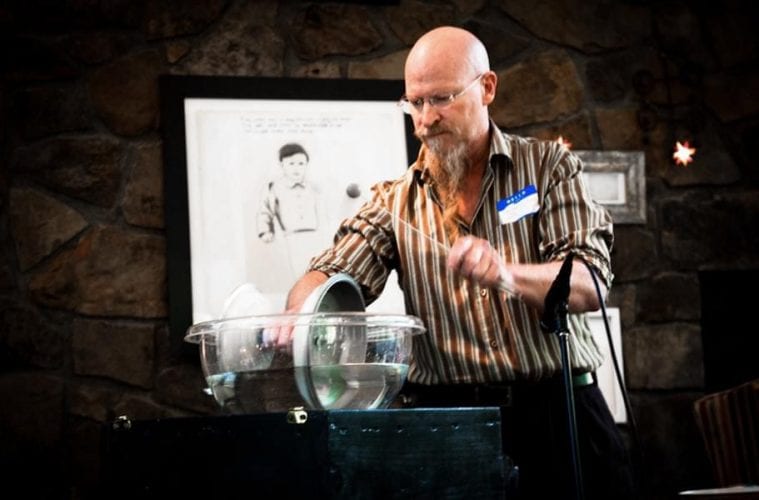 Preview: If they make it, Atlanta’s versatile Klimchak will probably play it in Balzer Theater show Klimchak coaxes music out of a bowl of water. (Photo by Lindsay Appel)

A man of one name and a thousand musical instruments, Klimchak, with his signature shaved head and long golden goatee, is one of Atlanta’s most immediately recognizable musicians. While he’s best known around town for his music for theater and dance, his solo and collaborative performances on electronic, electro-acoustic and home-built instruments continue to capture the eye and ear of the city’s front-edge artsy crowd.

Klimchak will perform a solo concert at the Balzer Theater on Saturday, July 7, presented by Theatrical Outfit as part of its off-season summer fare. “This is extremely odd for them,” says Klimchak. “I think that’s one of the reasons they’re interested.” It’s the second time Theatrical Outfit has hosted Klimchak in concert, following a successful show last July.

Recently in his studio, Klimchak gave ArtsATL a micro-tour of some of the various instruments he’ll play on Saturday.

Chief among them is his mainstay: the Marimba Lumina, MIDI controller and synthesizer put together by the legendary Don Buchla. It’s so rare a device that only about a hundred have ever been made. The playing surface has electronic bars arrayed like a traditional marimba, plus some non-traditional trigger pads and strips. It requires a special set of color-coded mallets — each recognized separately by the Marimba Lumina — six foot pedals and a breath controller.

Another rare instrument is the theremin, invented in 1920 by another electronics legend, Léon Theremin. Its eerie, spooky sound has appeared in many television and film scores, including the theme music for ABC’s 1960s gothic TV soap opera “Dark Shadows.” The most intriguing aspect of the theremin is that it is never touched while being played. It’s all a matter of proximity of the hands to two antennae, one for controlling pitch, one for volume.

“I’ll never get as good on it as I would like to, because it takes so much practice,” the musician says. “I do try to play it every day, but I really need to be playing it two hours every day, at least.”

He demonstrated three other home-built instruments: an amplified bowl of water, a marímbula and a tuned kitchen chopping block for preparing food.

The first is a wide, clear plastic bowl, partly filled with water. Various objects are lowered into the water and played; how far they are dipped changes characteristics of the sound, such as pitch.

The marímbula, not to be confused with the marimba, is a lamellophone like its close cousin the African kalimba or “thumb piano,” except that the marímbula is an Afro-Cuban instrument. And in this case it’s large enough for the performer to sit on while playing. Klimchak built his in a traditional manner, but adds amplification, electronic looping and a foot pedal-shaken cabasa in performance.

When we visited, Klimchak was still working on a “tuned” kitchen chopping block table. It’s a re-creation of the chopping block from his 1994 performance “The Cooking Show,” in which he produced sound from kitchen tools. “This is the piece that is actually easiest to do,” he says. “The deep-frying piece they nixed because they don’t want fire on the stage.”

Demonstrating sounds made with kitchen cleavers and a few other objects, including a plastic salad spinner, he describes it as another “looper” piece, involving electronic manipulation of the sounds. “I don’t always, but almost all the acoustic stuff in this show has some sort of looping in it,” he explains. “I’m not sure why; that’s just the kind of pieces I picked.”

One such piece is “Tarzan on Acid,” which he describes as a “looper yodeling piece. It’s cool but it’s really precise. The basic melody line is” — he yodels the motif — “and then a lot of toys and stuff get layered on top.” Exempli gratia, he squeaks a rubber frog.

“[Theatrical Outfit] wanted me to do a full evening that showcased some of the various types of music that I’ve done over the years,” he says. “I hesitate to call it a retrospective. It’s a current show with flashbacks.”