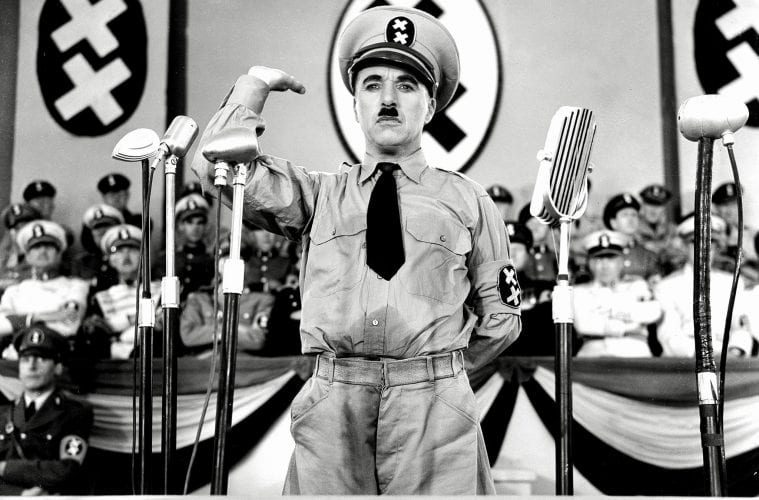 There are fundamental ties between film and fascism. Film festivals and fascism share a troubled history that extends back to 1932, when the Venice Biennale initiated a dedicated film track, effectively inventing the film festival. Awards to best actor and actress were called, “Great Gold Medals of the National Fascist Association for Entertainment.” The earliest prize for best film at the Venice Film Festival, awarded in August 1934 by the president of the Biennale, was called the “Mussolini Cup.”

The following month, in Nuremberg — with full support, cooperation and endorsement of the Nazi Party, a personal affirmation from Adolf Hitler and an opening credit that even read “Commissioned by Order of the Führer” — Leni Riefenstahl meticulously filmed the carefully orchestrated 6th Party Congress, a massive spectacle attended by over 700,000 Nazi party members, supporters and soldiers. The resulting film, Triumph of the Will (1935) is widely recognized as one of the most influential films ever made, and the single most potent works of propaganda in the history of cinema.

Riefenstahl, who rehearsed, staged and choreographed many of the sequences, employed a crew of over 172 to develop and synthesize a number of highly effective cinematic techniques: dazzling tracking shots, breathtaking aerial photography to give a sense of scope and scale, long focus lenses to compress depth creating the perspective of a unified nation in support of its benevolent leaders, shots from impossibly low angles (pits dug beneath the podium) to create the vision of grandiose statuesque power, expressive use of music to underscore the synchronicity of the action while inspiring nationalist loyalty and manipulative use of sound including rerecording most of the party leaders’ speeches in a studio and synchronizing crowd chants — “Ein Volk, ein Reich, ein Führer!” — to create a unified wall of support.

Film is such a powerful tool because of its ability to disguise its ability manipulate. Joseph Goebbels, Hitler’s minister of propaganda, is credited with saying, “Those who are to be persuaded by it should be completely immersed in the ideas of the propaganda, without ever noticing that they are being immersed in it.”

This film remains a staple of filmmaking courses to this day precisely because it is built to influence, persuade and seamlessly manipulate its viewers. Riefenstahl’s techniques can be seen in “good guy” propaganda like Frank Capra’s pro-American propaganda Why We Fight films (1942–45) or the Rebel’s award ceremony at the end of George Lucas’ Star Wars (1977).

Since no art form is better suited for propaganda than movies — a blueprint for conjuring visceral, emotional responses, mass appeal, whose supreme power to makes it the perfect vehicle to weaponize the message — it stands to reason that cinema also holds the key to fighting fascism.

A new series at Emory Cinematheque, “Resisting Fascism,” will explore how movies have been used to fight fascism. The series begins tonight at 7:30 p.m. in White Hall 208 with The Great Dictator (1940), Charlie Chaplin’s deeply personal response to Triumph of the Will.

Even though he was not himself Jewish, Chaplin was gravely concerned about the rising tide of anti-Semitism in Europe. He had even been singled out in a Nazi propaganda book called The Jews Are Looking at You as a “disgusting Jewish acrobat,” owing presumably to the Little Tramp’s downtrodden outsider status.

As Hitler ascended to power, Chaplin became haunted by the many parallels between himself and the dictator, most notably the physical resemblance between Hitler’s mustache and that of his signature character, the Little Tramp. They were born on the same week in April 1889, and each rose from poverty to the highest levels of power and fame.

While his friends René Clair and Luis Buñuel were demonstrably upset after a screening of Triumph of the Will, Chaplin laughed. He recognized Reifenstahl and Albert Speer’s grandiose staging as a gigantic production, commenting that Hitler’s performance was one of the most remarkable he had ever seen on film.

Perhaps because of his uneasy affinity with Hitler, Chaplin became obsessed with mimicking his mannerisms, imitating his speech patterns and perfecting his oratory gestures. Rather than cow to the imposing illusion, Chaplin sought to burst Hitler’s balloon — figuratively and literally — with a scathing satire that would expose his bloody cruelty and lay bare his naked ambition.

In one of The Great Dictator’s signature sequences, Chaplin showcases his physical comedy prowess, a call back to the silent era, with a two-minute ballet between Chaplin’s Adenoid Hynkel and a gigantic globe. Based on a detail Chaplin observed in a photo of Hitler’s office in the New Reich Chancellery, Chaplin lifts the world off its cradle mount and playfully tosses it into the air. Defying expectations, the globe flutters upward and gently floats back down. It is not a globe at all, but a glowing balloon. Chaplin manipulates and guides it from his left to right hand like a kitten toying with a ball of yarn. He leaps atop the desk, as though levitating himself, before gracefully bumping the globe with his bottom as it glides and glissades, oblivious to the lives in his path of destruction. He spins it Globetrotter-style on his finger, then — POP! — raptured from his seductive dream of world domination. Visually stunning, the sequence is both hypnotic and heartbreaking, exposing the allure of power while suggesting the precarious fragility of life.

At the film’s climax, he inverts the scenario, and pulls the heartstrings. As the Jewish Barber, mistaken for Hynkel, he is ushered into the rally where he must deliver a major address. His timid character is reluctant to speak. He has no choice — the fraud might be discovered. “You must. It’s our only hope,” his compatriot implores him.

Chaplin takes a long moment before slowly, hesitantly making his way toward the microphone. An eternity in silence passes before Chaplin looks directly to the camera. When he finally speaks, he issues an apology: “I’m sorry . . . but I don’t want to be an emperor.” In this moment, it is as though Chaplin has peeled away the many layers of his character. He is neither the Barber, nor Hynkel. He is speaking to us as Chaplin — making an appeal for common decency — directly to the camera, directly to the world:

Our knowledge has made us cynical. Our cleverness, hard and unkind. We think too much and feel too little. More than machinery, we need humanity. More than cleverness, we need kindness and gentleness. Without these qualities, life will be violent and all will be lost . . .

Chaplin wrote, directed and produced The Great Dictator at tremendous personal risk. He was advised by the studio heads not to rock the boat. There was fear that the picture would inflame anti-Semitism, making life more difficult for Jews both in the U.S. and abroad. As Chaplin developed his controversial project, Hollywood studios were shamefully sticking to their policy of tacit appeasement toward Italy and Germany. Great Britain, Chaplin’s homeland, and one of the most lucrative markets, also threatened to ban the film.

Undeterred, and in the face of uncertainty, Chaplin financed the project himself and began production in September 1939, less than a year after Kristallnacht, just as the Nazis were advancing on Poland. The film premiered in the U.S. on October 15, 1940, to critical and popular acclaim, earning five Oscar nominations and becoming one of the top grossing films of the year.

Ever the perfectionist, Chaplin notoriously worked and reworked many sequences in the film, often rewriting and reshooting entire stretches of the script, sometimes at significant cost, as real world circumstances changed throughout production. For a reshoot, and to add a new scene, he rebuilt the entire ghetto set.

That Chaplin ran his fiefdom like a dictator is an ironic touch that should not be lost on anyone familiar with the hierarchy of Hollywood, where tendencies like dictatorial power, forcible suppression of opposition and control of industry and commerce are celebrated — underscoring more fundamental ties between film and fascism.

“Resisting Fascism” screenings take place on the Emory Campus in White Hall on Wednesday evenings at 7:30 p.m. through November 29, featuring a number of notable films including Michael Curtiz’ Casablanca (1942), Ernst Lubitsch’s To Be or Not To Be (1942), Orson Welles’ The Stranger (1946), Bernardo Bertolucci’s The Conformist (1970), and Volker Schlöndorff’s The Tin Drum (1979).