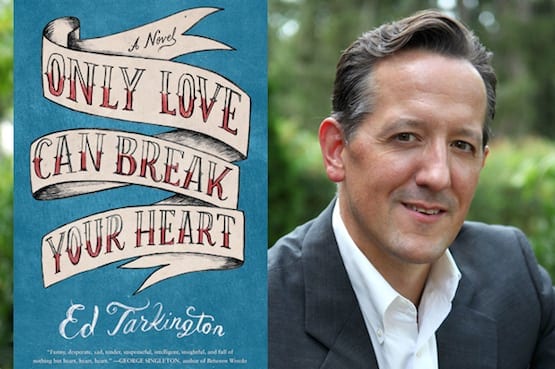 Preview: Ed Tarkington’s “Only Love Can Break Your Heart” is not short on drama In the small town of Spencerville, Virginia, Rocky, the protagonist of Ed Tarkington’s debut novel Only Love Can Break Your Heart, idolizes his brother Paul. Paul is an anti-authoritarian charmer beloved by his peers and hated by most adults. Paul’s habits of smoking in the house, listening to Bowie and driving around town with his beautiful girlfriend, Leigh, is the pinnacle of cool for Rocky. But Rocky has little awareness of Paul’s simmering anger about his mother’s death and his father’s neglect, until the day Paul picks him up from school.

After an afternoon that Rocky believed would be a bonding moment for the two brothers, Paul, in an unexplained moment of frustration, pain and rage, leaves his brother in a haze of cigarette smoke on the side of a mountain.

Told from Rocky’s perspective, Tarkington’s novel explores the redemptive power of love in the face of jealousy and neglect. Paul is the center of the story, and Rocky’s allegiance to him is clear from the opening lines: “Paul was my half brother. But I never called him that. This was partially out of loyalty — for I remained devoted to him, despite everything — but mostly because it didn’t seem quite enough, having only half of one brother.”

“Despite everything,” becomes freighted with meaning as the plot rolls and bumps over years full of disappearances, a mysterious double murder, a religious cult, abortions and eventually dementia. This novel is not short on drama, but is short on linear explanations. That may be Tarkington’s point.

In an essay in The Algonquin Reader, Tarkington says that for him, “the art of fiction comes down to being honest without telling the truth.” In order to do this, Tarkington relies on a child first person narrator and jumps back and forth in time. As a child, Rocky is astute but not ready to understand much of what he sees. His innocence proves realistic and useful: allowing Tarkington to rely on subtlety to tell his story.

Nowhere does this understatedness shine brighter than in the moment Paul abandons Rocky on the mountain. After Paul disappears and Rocky lies in the dwindling space between consciousness and blackout from too many cigarettes and beer, the story flashes forward to a point years later when Rocky is able to contextualize what happened to him.  As Rocky says, drawing a connection between his desertion in the woods and Paul’s mother’s funeral:

“That morning, Paul had driven home from Ohio…Paul had sat there in the church with what was left of his mom’s people, looking around for [his father] the Old Man, but he wasn’t there. There’s a strong case to be made that only a cold, arrogant son of a bitch would allow his first son, still essentially a boy, to bury his mother alone. But that’s how it went. After that, Paul came for me.”

Paul had buried his mother alone and then returned home. Perhaps he had been unable to find the Old Man, to find understanding and love after his terrible loss. Perhaps Paul blamed his mother’s death on his father and because Paul had been deprived a loved one, he would take a loved one from the Old Man, too. The explanation is unclear, but it is certainly obvious that Paul was looking for an outlet for his anguish. Rocky appears to know this and despite his fear, he does not seem angry at Paul for what he did to him.

After “falling into a fitful sleep” on the mountainside, Paul saves Rocky, asking him to hold onto his back while Paul carries them both from the rockface. Taking him home, Paul apologizes, and when Rocky asks him why he did it, he says, “I can’t say.” Rocky “looks for his face in the darkness,” the lack of light a metaphor for Paul’s emotional gloom, as Rocky observes that Paul appeared to him as “standing at the edge of a terrible abyss.” The abyss and darkness opens wider for Paul, who refuses to follow Rocky into the house. Despite Rocky’s forgiveness and unfailing love for his brother, Paul disappears. This slow unraveling allows Tarkington to layer this short scene with emotional significance. The flashback and flashforward sequence enable Rocky — and the reader — to gain some understanding of Paul’s motivations but not enough to make the situation simple. One of the highlights of the book is Paul’s continuing complexity. As much as Rocky observes him, desires to understand him, he always stays a flash out of focus.

The emotional weight of this scene draws partly on Tarkington’s personal experience. Tarkington’s sister, Caroline, was an inspiration for Paul. Like Tarkington’s fictional character, Caroline was frustrated by her broken family and considered inestimably cool by her younger brother. Also like Paul, Caroline kidnaps a sibling. (In this case, Tarkington and Caroline’s younger sister.) After driving her sister around for a short time, Caroline returns her to the sidewalk in front of their house. Again like Paul, Caroline then disappears.

This intense emotion coupled with the image of a child alone in a car was the seed for the novel. As Tarkington says, “I couldn’t write truthfully about my half sister; that story isn’t mine to tell. Instead, I simply began with a sound and a place and an image that still haunts me: a small child in a car with someone she trusts, oblivious to the hazards of love, jealousy and madness.”

Tarkington’s success is that he captures both the vividness of the events — a child being kidnapped — and the emotional weight of them — the hazards of love, jealousy and madness. This is certainly a novel where a lot happens, but to get caught up in the plot is to miss the point — and the beauty of Tarkington’s message.

As Rocky observes at the close of the novel: “This was my gift from Paul — his legacy, you might say. Only love can break your heart. And who wants to live without love?” Indeed, no one. But as Tarkington keenly observes, the hardest to love are often the most in need of it. In this way, the title, taken from a Neil Young song, becomes a truth: Only love can break your heart. But, as Tarkington’s novel illustrates, it is also the only thing that can mend it.

Tarkington will be speaking at the Margaret Mitchell House about Only Love Can Break Your Heart on Tuesday, January 19, at 7 p.m.