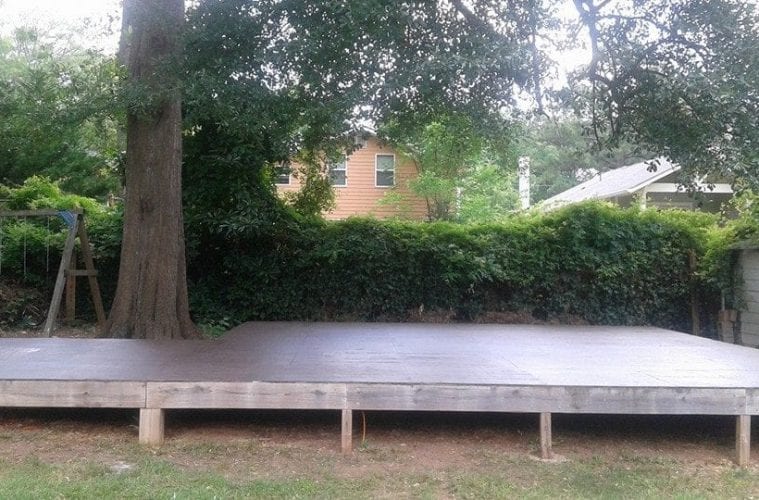 In the summer of 2012, Maryn Whitmore decided to build a stage in her Kirkwood backyard. In addition to her work as a teacher and performing artist, she was also a new parent; she wanted to find a way to sustainably continue making and showing work. After launching a successful crowdfunding campaign, her piece Thread premiered on her own stage and thus began her Skwhirlhaus performance space. The following year, she made an open call for proposals and presented a full season with 14 performances from spring through autumn. Audience members brought their own blankets, and admission was simply cash donations placed in a jar. This cozy simplicity hasn’t changed.

Named for her and her husband Matt’s shared love of squirrels and a nod to the Bauhaus movement, Skwhirlhaus has become a place where audiences can watch an array of live art in an open, hospitable environment. “To me there is something extremely magical about it,” she says. “I want to create an environment for a unique exchange to happen between the audience and performers, a dialogue between artists and patrons.”

This year, Whitmore has also been busy at the High Museum, creating workshops and performances for their family programming. This includes Over the Moon!, a performance produced in connection with Jaime Hayon’s playful sculptures, which are on exhibit through November. 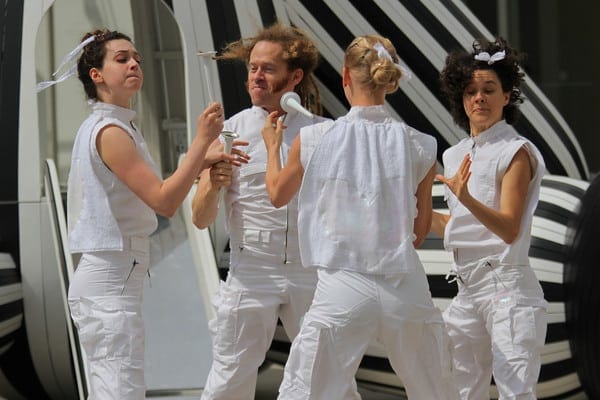 Maryn Whitmore (right) and dancers at the High Museum performing Over the Moon! (Photo by Abel Klainbaum)

Beyond her own work, the backyard stage has hosted a spectrum of local and national artists, emerging artists alongside more seasoned professionals. Now in its fourth season, Skwhirlhaus will present 19 new works this year. The first show of the season is June 17-18. The performance will feature work by Atlanta artists Sarah Freeman, Nadya Zeitlin, and Jennifer Tarrazi-Scully, as well as New Orleans-based artists Angelle Hebert and Shannon Stewart.

When asked what she looks for when choosing proposals, Whitmore said the values of hospitality and willingness stay central. These traits also carry over into her new program for children that just completed its first year. Skwhirlhaus Kids teaches children the tools to shape and make dance their own. It’s her belief that this kind of learning encourages the movement that resides in every human body; and this program lets them explore, create and express it.

This support of intrinsic expression is foundational to both programs. Whitmore said that she wants to give performers an audience because it enables them to do what is inherently fulfilling for them. “We’re always seeking to fulfill our authentic selves,” she says. “Giving these opportunities is very important to me. The fact that I can do it in my backyard without costing them any money — the fact that I can pay them — is giant.”

Back in 2013, the same year of Skwhirlhaus’ debut season, New Orleans-based Angelle Hebert also performed in Atlanta. Dance Truck presented a summer show at the Arts Exchange, and Hebert’s collaborative project tEEth was featured. It was here that she met Whitmore. “The mission behind Skwhirlhaus is something that excites and inspires me as an artist,” Hebert says. “That’s something I want to support and be connected to.”

For this appearance in Atlanta, she and her collaborator Shannon Stewart have made a duet titled Birthday Sue. These two women were born at the same time on the same day of the same year; and they used this work to look at both the “imaginary and real connections” of that. While their relationship seems mutually creative and inspiring, the piece was also a ploy to get Hebert on stage again after taking a couple years off from performance.

“We wanted to approach making a piece like we were planning a birthday party for ourselves,” Stewart says. The sound of LadyBabyMiss both facilitates and interrupts their antics, which explore their “mutations of connection — sisterhood, relationship to self, best friends, strangers. It’s a cycle of situations and images conjuring up the unrelenting impact one’s actions have on others.”

All Skwhirlhaus performances are at 327 Sisson Avenue, Atlanta. Be sure to follow their Facebook page for updates on upcoming events.

(Full disclosure: MaryGrace Phillips has been presented as a choreographer and performer at Skwhirlhaus.)