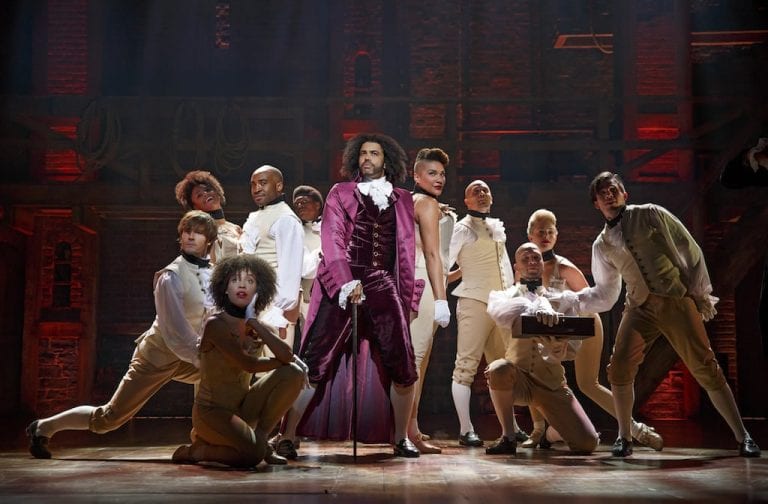 Hamilton, the Broadway show everyone is talking about, comes to Atlanta in the spring.

The fall is the most exciting time of year for Atlanta theater, and this fall has the added edge of the Alliance Theatre’s nomadic season while its main theater space undergoes a complete renovation.

Oh, and a modest little show called Hamilton is headed to town.

Andrew Alexander: Hi, Jim. Fall is on its way, bringing a new theater season with it. There are a lot of light-hearted, fun shows in the months ahead, but looking over the upcoming season’s offerings I’m also struck by how many theaters are putting on serious, hard-hitting, often politically relevant dramas, more than usual I think. It’s also a season that will be marked by the fact that the region’s most prominent and popular theater space will be shuttered. What are your thoughts about the season ahead? I’m especially curious to hear which shows you’re most looking forward to as the chill of fall approaches.

Jim Farmer: Hi there, Andrew. Wow — there are so many upcoming shows! I’m super excited about seeing Angels in America, both Part One and Part Two at Actor’s Express. It’s a long, sprawling, important piece of theater and a showcase for its cast. I have no idea who’s in it yet, but I still eagerly await it. Another biggie — the Broadway in America series will bring Lin-Manuel Miranda’s Hamilton to town next spring, and I hope it’s every bit as potent as I’ve heard. It should put a lot of butts in seats.

Alexander: Yep. Hamilton tickets will be pretty scarce. And I think Angels in America is bound to seem more timely than ever because it depicts what playwright Tony Kushner saw as a crucial turning point in American politics and culture, and we’re at another seismic shift now. Roy Cohn, who is a major character in the play, was Donald Trump’s mentor, so the play, almost unintentionally, offers terrifying insight into the philosophy and mindset that now occupy the White House.

Angels in America and Hamilton both set the bar pretty high as great picks, Jim. Way up there in my book is also Candide in the spring. I’m excited to see what the Alliance does with it. As I alluded to earlier, the Alliance Theatre’s permanent home at the Woodruff Arts Center will be undergoing major renovations this year, so artistic director Susan Booth has devised a season in which each play will be produced in a different venue in a different part of town. Candide is the big finale, on stage at Symphony Hall backed by the Atlanta Symphony Orchestra. Swoon. What do you make of the Alliance’s on-the-road season, and are there any play/venue pairings in it you think are especially enticing?

Farmer: I think it’s kind of exciting. A number of their road shows seems promising, but — I have to say — I think the pairing of the Alliance and Dad’s Garage, two polar opposite theaters, makes for really intriguing fare. The collaborative Hand to God seems like fun. The most produced play in regional theater for the 2016–17 season, it’s about a young man whose puppet takes on a surprise personality of its own.

The Alliance’s  production of the romantic comedy Crossing Delancey, presented at the Marcus Jewish Community Center of Atlanta, is another one I will make a point to catch. Elsewhere, I look forward to Topher Payne’s new Morningside at Georgia Ensemble Theatre. It’s a world premiere comedy taking place in the Morningside area of town where three generations are brought together. It’s directed by Shannon Eubanks, and she and Payne tend to work in sync together. Payne’s Perfect Arrangement is also getting a staging at Theatrical Outfit next spring. And I will never be too jaded to enjoy Rent, which comes to town via the Broadway Across America tour as part of a 20th anniversary tour.

What else has you stoked?

Alexander: I’m difficult to stoke lately, but there are some shows that certainly have me curious. Were you a fan of The Crucible last year at Actor’s Express? That recent show helps place Aurora Theatre’s upcoming production of Abigail/1702 in a few weeks near the top of my list. Playwright Roberto Aguirre-Sacasa imagines the characters from The Crucible ten years on. It seems like a really ballsy and interesting idea, but it’s easy to see how it could all come out really awful, too. I’m heartened to see Lee Osorio and Danny Rodriguez in the leads, with Justin Anderson directing.

Boy at Theatrical Outfit, also just around the corner, is Anna Ziegler’s new play based on the story of David Peter Reimer, who was born male but raised as a girl. And then later in the season, the same theater does Lauren Gunderson’s Miss Bennet as a holiday show.

I know very little about hip-hop music and its history, but Kenny Leon’s True Colors production of Holler if You Hear Me, the Broadway show about the life of Atlanta rapper Tupac Shakur featuring his music, should help fill me in in just a couple weeks. I like the fact that the Alliance will be taking the unusual step of presenting two linked one-acts by Pearl Cleage at the Southwest Arts Center in the spring. Her full-length shows are always a surefire hit, but one-acts are a very different form and a harder sell: it will be interesting to see if Cleage is as capable here as she is elsewhere.

Here’s a question for you: anything in the upcoming season you’re not looking forward to? You don’t have to call out anyone or anything by name, but any trends, genres, theater stuff that makes you go, “Oh, god, not this again.”

Farmer: Yes, Andrew. There is a show that is being produced locally this season that had a lot of build-up before it was announced and I went — Why? Again? Why not this or that instead? But in this era of flogging local theater critics online if they dare speak a critical word, I will just leave it at that for now. I recently saw A Doll’s House, Part 2 with Laurie Metcalf on Broadway. I imagine it will be a while before that makes the regional rounds and plays here, but when it does I fully demand to see Carolyn Cook in the lead. I’d really love to see the Tony Award-winning Fun Home in Atlanta this season too. You?

Alexander: I think I’m the only person on the face of the planet who didn’t like Shakespeare in Love as a film, so the theatrical production, which opens presently as the first big show of the new season, will have a long way to go to win me over. Also, religion is obviously a significant and interesting theme for drama, but cheesy plays that take it as a subject can truly make me squirm and cringe in a way that nothing else can: it’s a difficult path to navigate well. Comedies and musicals will have a hard time trying to lighten the mood this season in my opinion: I’m guessing that anything that misses the mark will seem excruciating, so I’m bracing myself for that. Any last-minute shout-outs for the good stuff?

Farmer: As for final productions I am excited about, I have to say The Harvey Milk Show at Actor’s Express. It’s the first production I ever saw in the ATL, and it has a special place in my heart. That original Actor’s Express cofounder Chris Coleman will be returning to Atlanta for it is a plus. I too adore Lauren Gunderson’s work. The only caveat is that she is getting produced so much, I can’t see all of her shows here, but I will try.

Elsewhere I look forward to Bengal Tiger at the Baghdad Zoo at 7 Stages, the drama Project Dawn at Horizon Theatre, Sense & Sensibility at Synchronicity and a new season for the new guys in town, Out Front Theatre Company. I also can’t wait to see what Brian Clowdus at Serenbe Playhouse has cooking next. His Cabaret floored me, both in its execution and its relevance. He won’t announce his next slate until November but is promising a “watery season, full of fairytales, discovery and adventure!” And I’m sure there is a jewel out there that I know nothing about now that will rock my world. Or hopefully semi-rock my world.

Alexander: With that, onward into the new season. Let it rock, or failing that, at least semi-rock our world. Either way, I look forward to covering it all and seeing you there, Jim!

Farmer: Right back at ya.