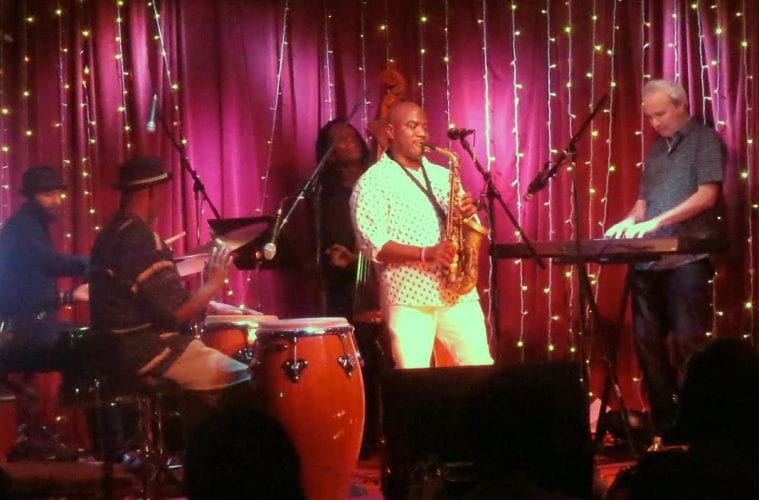 Saxophonist Dwan Bosman and his band offered up an energized evening of jazz/fusion music Saturday night at the Red Light Cafe that hit the right note for a late August weekend and turned into a fine musical family gathering.

A well-known figure in Atlanta’s jazz community, Bosman comes from a family with a strong musical legacy. His father, Dwight, and uncle Dwayne are the sax-playing Bosman Twins of St. Louis, and their 2015 CD, When Lions Roar, captures the essence of St. Louis jazz. His grandfather Lloyd Smith was lead alto sax with the Earl Hines Orchestra and occasional sideman with the Duke Ellington Orchestra, and a teacher of John Coltrane. This jazz-immersive family environment was strongly present at Saturday’s show: Bosman’s father and his wife, sister and a handful of cousins were present in the audience.

Dwan’s Nashville-based sister, Morgan Bosman, performed an opening solo set with her soulfully mellifluous voice, laying down her songs with only her large ukulele as accompaniment — tapping the instrument’s soundboard for a drum-like rhythmic enhancement of her straightforward chordal strumming. Morgan switched to keyboard when brother Dwan joined her on stage to close the set with a duo number.

After a short break, Dwan Bosman ascended the stage for his first set, backed by band members Bill Wilson on keyboards, Ramon Pooser on upright bass, Paul Hooten on congas and Emrah Kotan on drums, performing both originals and notable classic covers. Among originals in the relentlessly hot set was an instrumental version of “Sometime I Wonder” from his 2013 CD, Sax Attack! Dwan’s blazing alto sax was the center of attention, underpinned and complemented by his four skilled colleagues.

For the final number on the set, father Dwight Bosman came out of the audience with alto sax in hand to join Dwan and the band in a rendition of Wayne Shorter’s 1966 jazz standard, “Footprints.” Dwight Bosman’s playing evidenced slightly less edge but no less heat; the overwhelming similarity of style and technique was evident in their exchanges, each taking their instruments into the stratospheric altissimo range as part of their respective high-speed displays of virtuosity.

Given an opportunity to perform with her brother’s full band, Morgan Bosman sang the opening number in the second set, Marvin Gaye’s “What’s Going On,” to great effect, showing the audience what she can do with a full ensemble behind her.

Dwight Bosman came on stage a second time for a funky version of “Precious” by John Coltrane. In this number, both Dwan and Dwight stepped down at one point to wander through the audience, interacting one-on-one with listeners at close range while playing at full intensity.

At the end of the show, Dwan, Dwight and Morgan all gathered at the front of the stage for final bows while the band riffed on Tito Puente’s latin-jazz classic, “Oye Como Va.” Then they broke into the celebratory early 20th-century hymn, “Lift Every Voice and Sing,” by brothers James Weldon Johnson and John Rosamond Johnson, expanding the evening’s feeling of family to include and embrace the larger community gathered at Red Light Cafe, just before the ardent, enthusiastic audience began to make their way home.