Examining the wall labels in Kristofer Laméy’s exhibition of mostly lighting-related works, at the Museum of Design Atlanta through October 30, you might momentarily confuse its title, “Serving Form,” with the name for those ginormous warehouses full of Internet switching devices called “server farms.” 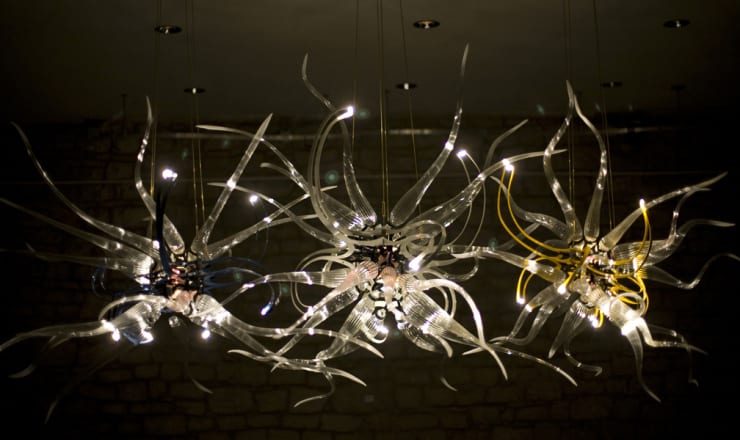 Each label in the show includes a QR (for quick reference) code. That’s a bar-code-like image that, when scanned using an app on your smartphone, will rocket you into cyberspace, for example to a page on Laméy’s website where you’ll find further detail on the label’s subject. Don’t have the app? You can download it on the spot at MODA. Don’t have a smartphone? We request the pleasure of your company in the second decade of the 21st century.

I’d never seen QR codes on exhibition labels before, but suddenly I feel certain that by the day after tomorrow, they will replace the museum audio tour (and R.I.P.). If Laméy is truly the progenitor of this use of QR codes, it’s not the only thing he has invented. Including terminology. The wall label texts are studded with his own usually technical (and occasionally awkward) jargon. Another of his coinages is the show’s title itself; by “serving form,” he means an object that has a use.

This goes right to an inevitable question about his work: is it art, or high-tech craft? Laméy relates that a well known Atlanta gallerist who liked some of his illuminated pieces declined to show them on the grounds that, because they emit light, they are functional and therefore not fine art. Never mind that the illumination emanating from them is only atmospheric; you’d go blind trying to use one as a reading lamp. “I call it ‘work,’ ” the artist says. “People call it what they call it.” He labels himself an industrial designer but also points out that he sells on the art market. 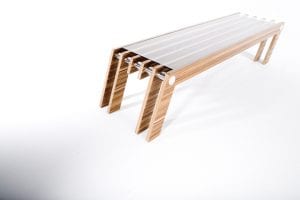 As in traditional definitions of craft, Laméy’s work is concerned largely with materials and process. Each of his series aims to solve a technical challenge he sets for himself. For “Reaching,” the test was to devise a form that could be lit without using any wires. That geeky-sounding objective doesn’t begin to describe the result, a whirling, fluid sea-creature of a chandelier made of long blown-glass tentacles held together in a matrix of water-jet-cut aluminum. Experiencing it as art, I really don’t care whether this beautiful thing has wires or not. But understanding of the design process is certainly helped by the presence nearby of disassembled duplicates of some of the parts. 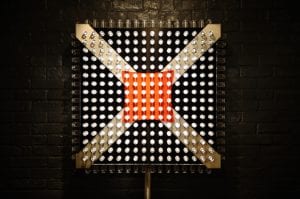 Laméy’s series “Ambassador” (left) is mounted both as a complete piece and as a part-by-part deconstruction. “Ambassador” is a big, square, wall-mounted box studded with transparent pegs out of which light comes, connected to an electrical socket by a thick metal hose that sits in a big loop on the floor. It’s squirm-inducing to look at, unlike the lyrical “Reaching,” but the adjacent explication teaches a lot about the materials and techniques employed — and also illuminates the methodical and exacting nature of Laméy’s practice.

Less scientific and more enigmatic are a display of the sketchbooks he has used over the years — even though you see only their covers, it’s tempting to imbue them with a sense of continuity and progression — and a grid of 48 informal photographs of Laméy and friends that he mounted in response to the suggestion that he should produce an artist’s statement.

“I thought of Facebook,” he explains. “What’s the first thing you look at on somebody’s Facebook? The pictures.” 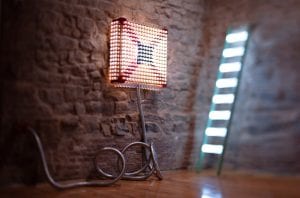 It’s no wonder this show sprawls a bit. Laméy is intense and prolific, and if he’s a technician, he’s an artist too. Besides, he curated it himself. Anyway, this is the kind of exhibition of provocative local work that is just right for MODA to include in its program. It also happens to be the museum’s last show before it reopens a few months hence in its promising new location across the street from the High Museum of Art.

“Serving Form” coincides with Atlanta Design Week (October 23-31), and, as part of that, Laméy will be at the museum from 1 to 6 p.m. on the 25th through the 29th to discuss his work. Technogeeks and art junkies alike should get an earful.