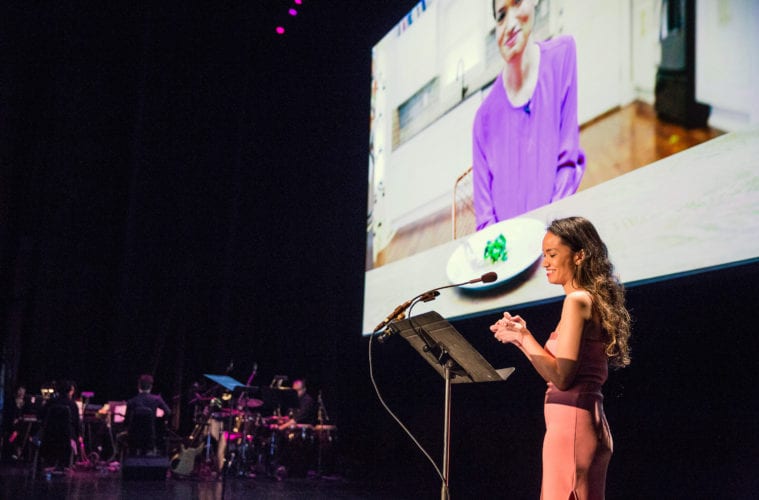 Where can you listen to drunk dials to a customer service hotline, watch someone try a hamburger for the first time, experience a friendship long-obscured by one of the country’s most infamous murders and smell an extinct flower?

Pop-Up Magazine, the live show that first came to Atlanta last year, returned to a soldout crowd at Variety Playhouse on Monday night. The literary performance, now in its 10th year and on national tour, is often pitched as “your favorite glossy magazine, come to life,” and it’s an admirable attempt to explain the genre-defying show, what senior producer Tina Antolini calls, “a new frontier of journalism, a hybrid of nonfiction storytelling and the performing arts.”

This year’s show — or “issue” — featured 10 journalists reading their stories aloud, accompanied by the Magik*Magik Orchestra as well as film, photography or animation. Plentiful cocktails and a post-show social hour, as well as sponsorships — or “ads” — from big timers like Bulleit Rye, Mailchimp and Google all contributed to the sense that this ain’t your traditional literary reading.

But it’s the stories that ultimately pushed Pop-Up Mag into a class of its own.

Case in point: Stephanie Foo’s opening piece about how, in the bleak and disgruntled world of customer service, booze is one of the few industries where people rave about their customer satisfaction. For one winning example, an older woman barely contains herself (and others giggle in the background) as she asks where she can please get more “chocolate wine.” Hearing these folks’ actual voicemails and seeing their slurred but enthusiastic words appear on a screen as they stumble through them is what made the story. In other words, the piece was perfect for, not print, radio or video, but Pop-Up Mag’s trademark genre.

“Because the form is unusual, it ends up being a little more of a collaborative process,” says Antolini. “A pitch rarely comes to us fully formed, but part of the fun is getting into it and envisioning how something could take place on stage.”

Foo’s was just one of the stories deftly adapted by the orchestra and the art department to create an immersive, multi-sensory experience. Much of the charm of James T. Green’s piece about old cell phone ringtones was in hearing those dumb, tinny tunes again, sounds which have somehow already been claimed by nostalgia. In another multimedia story, Atlanta’s own Josie Duffy Rice revealed her fantastically picky eating habits through videos of her tasting new, exotic foods, like . . . cheese. Other stories dove into family histories that involved the origins of the electric guitar and something called a “sex therapy institute,” while others dealt with heavier themes like the “caring fibs” we tell dementia sufferers.

The audience was most rapt during Sophia Nahli Allison’s story and film, which recast the murder of Latasha Harlins as the immense loss of a deeply loved kid, rather than its more common recitation as the political spark behind the Los Angeles riots.

“It’s been exciting to try to think about stories in a more three-dimensional way,” says Antolini. “There’s just so much possibility there — to think about what’s possible with a journalistic story that will make it land with the audience in a different way than [if it were] on the radio, in a film, or in print.” Commenting on Rowan Jacobsen’s piece about an extinct juniper pine, the scent of which was reincarnated for the audience by way of a tiny smelly pouch inside the program, Antolini says, “there’s just really no other journalistic outlet that could allow me to produce this story.”