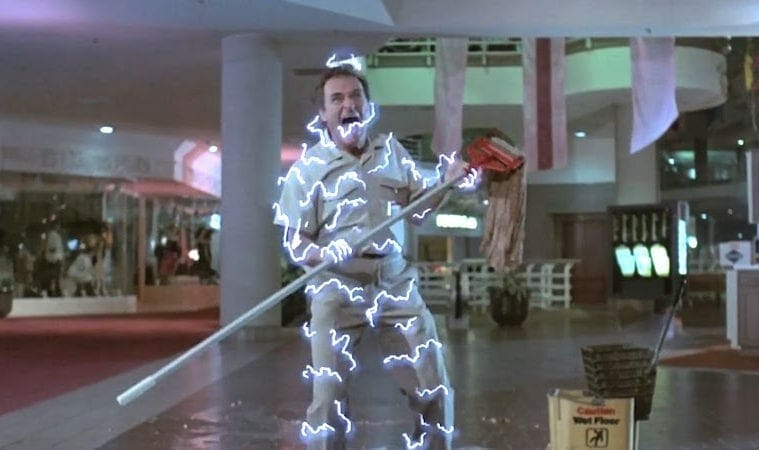 Two years ago, like a school of fish that swims together to ward off bigger, toothier prey, Videodrome and the Plaza Theatre, both essentially the last of their kind in this city, partnered to present a curated film series called Plazadrome.

For Videodrome, a brick-and-mortar video rental store, and the Plaza, an art-house movie theater that still screens movies, it was a symbiotic partnership from the get-go. “I like to say we’re the Videodrome of movie theaters,” Plaza owner Chris Escobar says. “Or they’re the Plaza of video-rental places.” Chris Escobar bought the Plaza in 2017 and made it known that he was eager for community partnerships.

Plazadrome celebrated its second anniversary in March, the same month it was forced into hiatus by the Covid-19 pandemic. It returned in late May, when the Plaza’s new pop-up drive-in debuted in its back parking lot and at Dad’s Garage Theatre Company. Several screenings of the pick, Destroy All Monsters, sold out. Videodrome owner Matt Booth calls it the “battle royale of Godzilla movies.”

Now, with Covid–safe venues, Escobar says he hopes to continue the Plazadrome reboot at least once a month “if not more often.” The next screening is at 9:30 p.m. Thursday (July 9) at Dad’s Garage. The featured flick is Chopping Mall, a 1986 horror–sci-fi–comedy about young mall employees who stay late to party. (A showing at the Plaza is already sold out.)

The Plazadrome venture is accustomed to uncertain times. In 2017, Booth rallied his small Videodrome staff, mostly part-timers who love the store, to brainstorm on how to combat declining revenue. “We decided we needed to focus our brand on actually making money,” he says. Videodrome, named after the David Cronenberg movie of the same name, has had its ups and downs since opening in 1998, but it maintains cult status among cinephiles and holds a whopping 20,000 titles.

Booth says he’s never been in the same game as streaming services or bigger, generic chains like the now-defunct (save one, in Oregon) Blockbuster. Videodrome provides a deeply invested, devoted, passionate knowledge about the world of cinema and the ability to offer guidance and insight into the selection process. That means lots of movies you can’t get anywhere else.

When Escobar bought the Plaza in 2017, he made it clear he was eager for community partnerships. “We had done a couple things with the Plaza randomly, under different owners,” Booth says, “but I think in those cases the owners saw us as more competition.” Escobar didn’t.

The two agreed that they’d try a five-movie screening series and launched it March 15, 2018, with House (or Hausu), a 1977 Japanese comedy–horror film that one reviewer called a “psychedelic ghost tale.” Under owner Matt Booth, Videodrome offers devoted and passionate knowledge about the world of cinema. (Photo by Steve Schaeffer)

From then on, Escobar says the Videodrome team has pretty much had carte blanche when it comes to programming. “They take it and run with it, and then we just need to see if we can actually get a copy.”

The selection process is intuitive, relying on Booth and his cohorts’ encyclopedic knowledge of cinema and their audience’s instincts. They curate each lineup like a master chef plans a tasting menu, mixing genres, decades and good versus so-bad-it’s-good like disparate ingredients in a sophisticated dish.

The results include a strange concoction of movies including Hard Ticket to Hawaii, a B-action movie with a deadly Frisbee; the Nicolas Cage/John Travolta hamfest Face/Off; and Tammy and the T-Rex, in which a boyfriend’s brain is implanted into a robotic dinosaur.

“They’re not all garbage,” Booth says, “There are some serious ones.” Terry Gilliam’s sublime Brazil, the subversive rock opera Phantom of the Paradise, the neo-western vampire flick Near Dark and the avant-garde Czech feminist film Daisies have all drawn crowds.

Videodrome has been operating with a table across its entryway and a socially distanced line for pickups-only for months. Business boomed at first, as people stockpiled movies for hunkering down at home. But that fervor faded as the quarantine wears on.

The Plazadrome reboot has a different format and different rules but has provided an outlet for local artists to pay homage to their favorite films and get their work seen. For the June screening of Destroy All Monsters, Atlanta artist and designer Dean Velez created a limited-edition print series titled Plazilla. It shows a bright green creature wreaking havoc on the Plaza and its surroundings, flames unfurling into the Atlanta sky. On the Plaza website, Velez calls it “an homage to my childhood.” The prints sold out.

“Whether it’s intentional or not,” Escobar says, “art can make you reflect on the times you’re in.” Atlanta artist Dean Velez created this limited-edition print to coincide with the Plazadrome’s June screening of “Destroy All Monsters.