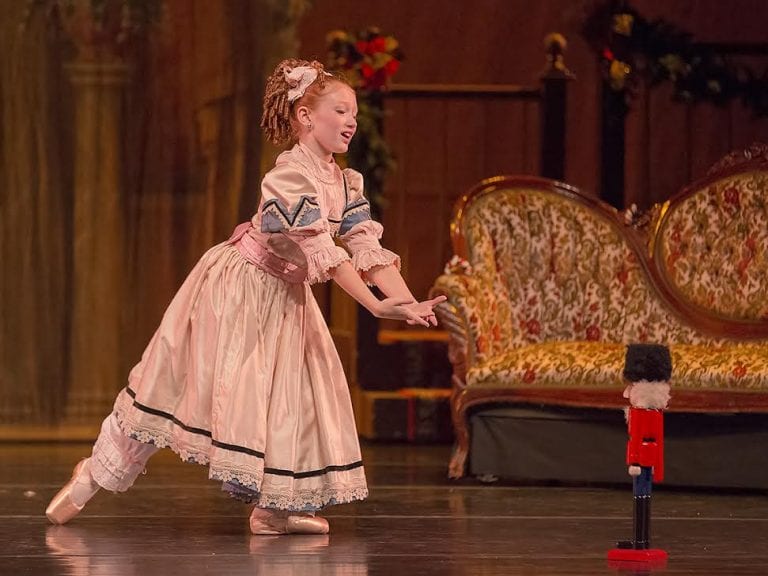 The Gwinnett Ballet Theatre version of The Nutcracker begins November 29 in Marietta. (Photos by Richard Calmes)

From Atlanta Ballet’s mega-production at the Fox Theatre to a performance at the high school in Fayetteville, Atlanta is flush with productions of The Nutcracker.

Here’s a handy list of the productions around the area that are well worth seeking out.

Atlanta Ballet’s The Nutcracker. The big news in town, this world-premiere production choreographed by Yuri Possokhov and accompanied by the Atlanta Ballet Orchestra features many of the traditional plot points — a girl who is given a nutcracker that springs to life, and a battle between mice and toy soldiers. But this version looks to some of the darkly fantastical aspects of E.T.A. Hoffman’s original 1816 tale as a stellar design team brings a child’s imaginary world to life. Meanwhile, dancers will be challenged to rise to the rigors of Possokhov’s style in artistic director Gennadi Nedvigin’s bid to raise the company’s artistic profile. December 8–24 at The Fox Theatre.

Gwinnett Ballet Theatre’s The Nutcracker. Rising talent Luke Badura, recently seen in Aurora Theatre shows Mamma Mia and Newsies, will perform as Cavalier with a cast of students and pre-professional dancers. In this production’s 37th season, advanced-level guest artists from Atlanta’s International City Ballet will dance in “Waltz of the Flowers,” and the Gwinnett Ballet Theatre Orchestra, conducted by Predrag Gosta, will accompany most performances during the three-weekend run, November 30–December 16 at the Infinite Energy Theater.

Georgia Metropolitan Dance Theatre’s The Nutcracker. Formerly Ruth Mitchell Dance Theatre, the company brings more than 150 local students to the stage in its version of The Nutcracker, with new choreography and costumes. Ashleigh Whitworth, a Ruth Mitchell protégé, now directs the company in its 62nd year. The show runs November 23–25 at the Jennie T. Anderson Theatre in the Cobb Civic Center.

The Georgia Ballet’s The Nutcracker. Artistic director Daet Rodriguez and ballet mistress Margit Peguero have taught and coached this troupe of deeply committed dancers with a palpable respect for the artists and devotion to the art form. During the performance run, former Georgia Ballet students Tessa Castellano and Murillo Barbosa, now company members, will dance several principal roles in new choreography by Rodriguez and Peguero. November 29–December 2, with a sensory friendly show on Friday, November 30, at 7:00 p.m. at the Jennie T. Anderson Theatre in the Cobb Civic Center.

Metropolitan Ballet Theatre’s The Nutcracker. Celebrating its 20th-anniversary season, this gem of a pre-professional company is fueled by the passion and wisdom of ballerina Maniya Barredo, one of the brightest stars in Atlanta Ballet’s history. Under Barredo’s tutelage, company members are well prepared for the ballet’s principal roles and often appear as guest artists in other productions. The show runs December 14–16, with a “story time” at 12:30 p.m. before matinees, at Blessed Trinity High School Theater.