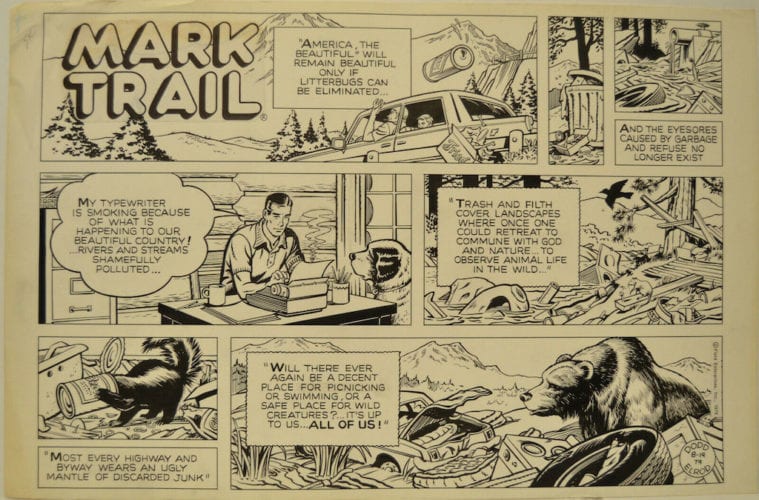 If you don’t yet have plans for spring break, you might consider heading to the Chattahoochee National Forest just north of Gainesville, Georgia, and doing some hiking through the pristine natural wilderness. While you’re there, be sure to hike the Mark Trail, named for the title character in Ed Dodd’s iconic Mark Trail comic strips, which have been in syndication for over 50 years. It may seem odd for a hiking trail to be named after a comic strip character, but the Mark Trail series, and its creator Ed Dodd, quite literally put the topic of wildlife conservation on the map.

The Mark Trail comics follow the story of Mark Trail, an outdoor magazine writer and photojournalist who invariably encounters some environmental mishap or endangered wildlife in the course of his work. Along with his wife Cherry, their adopted son Rusty and their Saint Bernard Andy, Mark Trail sleuths out the perpetrators of various environmental misdeeds and brings them to justice, highlighting Georgia’s native species and the real-life threats to their survival along the way.

And now, lifelong readers of Mark Trail — and anyone else who’s interested in art related to Georgia’s history — can own an Ed Dodd original, thanks to Newnan bookseller Burnt Biscuit Books. Up for grabs are original Mark Trail panels, as well as some signed pieces from Ed Dodd’s contemporaries in an effort to provide aid to Dodd’s remaining family.

“Original Ed Dodd art is rare,” says Michael Stark, owner of Burnt Biscuit Books and manager of the Ed Dodd estate. “Most of it was literally used as landfill around Lost Forest. Occasionally, Ed would give a signed piece as a gift, so those are some of the only ones still in existence.”

Indeed, the real hero of the Mark Trail tales is Dodd, who practiced in his life what he preached through his art. Dodd used his comic strip as a tool for teaching children how to enjoy the outdoors while still treating it with respect. He worked with park rangers to select wildlife to showcase in his Sunday strips, which educate the public about wildlife in peril. His attention to the decline of a local alligator population resulted in an effort to save the species, which is now thriving due directly to the spotlight Dodd was able to shine on them with his work.

Though he passed away in 1991, Dodd’s legacy lives on through his wife, Rosemary Dodd. To hear her speak about her late husband, one can’t help but fall in love with both of them a little bit.

“Ed was always my hero,” she says. “He was one of the first people to encourage conservation efforts. It was just not on the public radar before him.”

Rosemary, an artist herself, says that working as a comic artist for Ed had always been a dream of hers ever since she was a girl and Ed was a friend of her family. Though she never did produce art for the comic, the couple did live out their own Mark Trail dream together, complete with a dog named Andy and a home in North Georgia in their own Lost Forest — just like the setting that the Mark Trail character raised his family in.

When asked if she was worried that collectors may not view comics as “real art,” Rosemary bit back without missing a beat: “Try and draw one!” She went on to defend the form, saying that “[comics] tell a story just as any art does, but they do it in a direct way that anyone can understand.”

Those interested in owning their own little piece of Mark Trail’s Lost Forest are invited to check out the items listed for sale here.

But if you’re the outdoorsy sort, consider hiking through the Mark Trail Wilderness in Sandy Springs or the Ed Dodd Trail at the Elachee Nature Science Center in Gainesville, Georgia, both dedicated to the memory of one of Georgia’s most treasured artists.

The only place you can’t go is Dodd’s own Lost Forest, which burned down in 1996. But don’t worry, says Rosemary, as long as we remember to treat the environment with respect, the “Lost Forest is wherever you want it to be.”