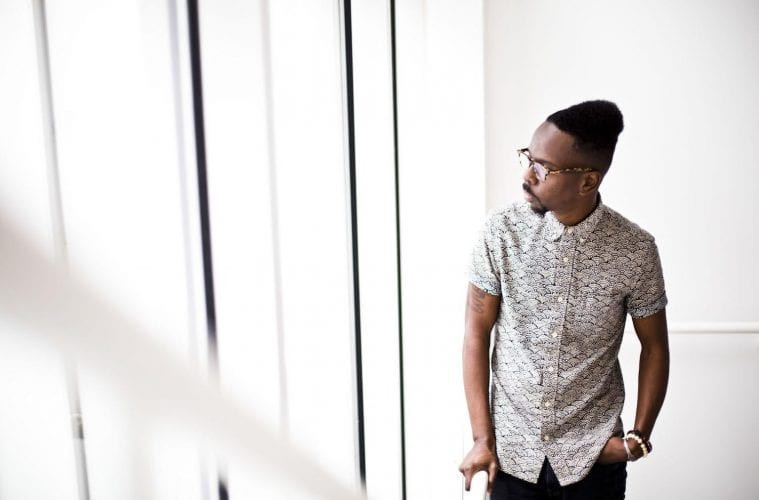 One day in April 2015, I came home to a package in the mail. The sender was the Halsey Institute of Contemporary Art in Charleston, South Carolina. Inside was a copy of The Post and Courier, the local newspaper from Charleston. The cover story was about the murder of Walter Scott by a Charleston police officer. Attached to the newspaper was a sticky note from the Halsey’s director, Mark Sloan, which simply read: “It’s Time For You.”

Walter Scott’s murder was more kindling on a raging wildfire, one that even today remains no closer to being extinguished. Here was an example of yet another Black man senselessly murdered by a sworn peace officer. Mark reached out to me knowing that my work has long engaged issues of Black masculinity, the majesty as well as the tragedy. I’ve committed myself to using my art and my voice to be an agent of change. As a college student, I saw how my work and experience could inspire hope and healing. I told myself –– and anyone who would listen –– that I was not interested in “making pretty pictures,” but instead to make work that would have an impact on the world.

Observing as well as living the ongoing traumas of a Black male experience, and ultimately the birth of my own son, became a call to action. I dedicated myself to addressing the concerns, hopes, traumas and triumphs of Black masculinity. My hope was to make art that would inspire us all to be better, for the world to wholly “see” Black men and for Black men to see themselves, whole.

As the number of Black male (and female) bodies continued to mount, I took Mark’s invitation to heart. Early in the process I shunned the temptation to further catalogue the violence and atrocity of generations of targeted violence disproportionately directed towards Black men. Instead, I tried to navigate from a place of resistance to the spectacle of Black male death. I focused on the hope and power I saw in the Yoruba spiritual practice, sometimes referred to as Ifa. I began to explore the idea of ancestral legacy, death, rebirth and ritual in Ifa, carefully considering how the spiritual ideology of our ancestors might inform us and equip us to resist the fear-inducing threat that the campaign of violence engenders in us. Drawing parallels between Ifa and modern Black creative spaces such as hip-hop and other Black aesthetic movements, I began to weave together strategies of enlightenment and aspiration. I tightened the focus of my academic work to help me interrogate the psychology and effect of death-bound subjectivity on our contemporary performance and expressions. I read every book I found relevant. I sat with priests and participated in rituals. I unpacked my research in paintings, drawings, performance art, an album of original music and even a short film titled Emmett Still.

I felt confident about what I was able to create and hopeful about its reception. Then on July 5th, I awoke to a news feed flooded with images of Alton Sterling, pinned to the ground by two police officers before being shot point-blank for no apparent reason. The anger in me flooded in faster than I was prepared for. Then within 24 hours, Philando Castile was executed before his girlfriend and child during a routine traffic stop.

The anger in me became rage. Rage became fear. Fear became  despair. Suddenly I found myself questioning the efficacy of my work. I felt hopeless, helpless and insignificant. When developing the ideas around my work I asked, under the looming threat of death, how might we inspire life? Through what mechanisms could we resist the psychological violence and despair inspired by the threat of violence and at the same time usher in hope?

But suddenly I became voiceless, arrested with doubt. I could no more answer the very questions I raised than I could assure my or my son’s hope for a long fulfilling life. I was no longer sure that what I was doing would be sufficient.

Then I received a little video from my 13-year-old daughter. She’d produced, directed, filmed and edited an amazing little music video. As I watched her and her little brother singing, the broadest smile appeared on my face. What was rage gave way to the purest joy. What had been doubt sured up to become a renewed sense of purpose and focus. Just like that, all the uncertainty that bubbled up went away and I was reminded why I do this.

I make art as a form of protest, but more so as a form of love. Art has always been transformative. It is not merely a reflection of our times and experiences, it also has the capacity to redirect us. As artists, it is imperative that we use our creativity to say the things that words do not easily convey. It is imperative that we use our brushes, cameras, hands, voices, our instruments and our very bodies to show the world what our eyes sometimes fail to see. As my daughter reminded me, the beauty in us transcends this time and transcends our individual experiences. It is a beauty worth fighting for. The art we make is evidence of that fight. After all, in the future, historians will tell what happened, but artists will tell how it felt.