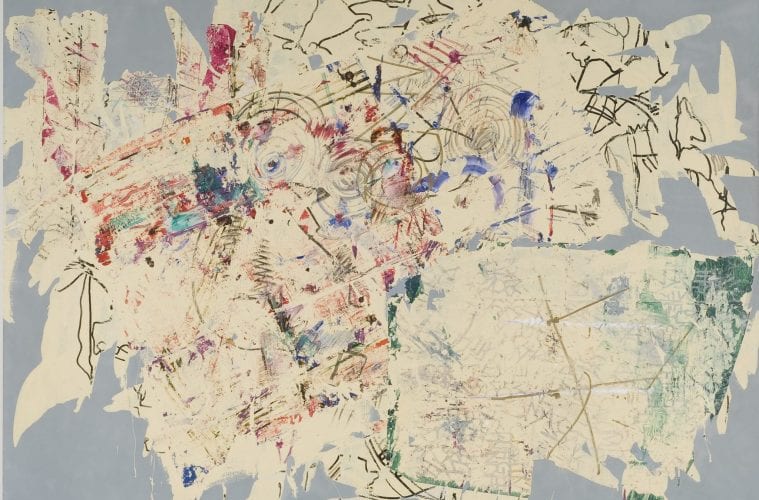 Entering the expansive space of the Museum of Contemporary Art of Georgia’s Educational Resource Center, I felt instantly immersed in Herbert Creecy’s lifelong “love affair” with painting. Jackson Pollock famously explained that he painted his unstretched canvases on the floor because he felt “more at ease [and] nearer, more a part of the painting since this way I can . . . literally be in the painting.” Like Pollock, Creecy lived painting, and visitors to Creecy: A Survey of Major Paintings, at MOCA GA through August 20, can experience the artist’s intense and passionate engagement with paint. In the video Creecy: Celebrating the Art and Life of Herbert Creecy, which plays in a small room off of the main gallery, the artist explains “I try not to think when I paint, and that may sound really off the wall, but you can’t learn something if you know what you want to put down . . .  I don’t want to know what I want to put down because I want to learn something . . . if you start out with what the thing is supposed to look like . . . I feel I lose the experimental quality that makes it into another life.”  Again, Creecy’s “experimental” approach recalls Jackson Pollock, who stated, “When I am in my painting, I’m not aware of what I’m doing. It is only after a sort of ‘get acquainted’ period that I see what I have been about. I have no fear of making changes, destroying the image, etc., because the painting has a life of its own. I try to let it come through. It is only when I lose contact with the painting that the result is a mess. Otherwise there is pure harmony, an easy give and take, and the painting comes out well.”

After graduating from the Atlanta College of Art in 1964, Creecy won a fellowship to study in Paris with the English printmaker Stanley William Hayter, whose emphasis on automatism and experimentation had earlier influenced Jackson Pollock and other New York School artists. When he returned to Atlanta, the art scene had expanded beyond abstraction and pop to include minimalism, performance, conceptualism and installation art. But Creecy steadfastly pursued abstract expressionist experimentation. He moved his home and studio to an old cotton factory in Barnesville, Georgia, where he lived surrounded by his art. Despite being one of the only students ever given a one-person show at the High Museum (according to former High Museum Director Gudman Vigtel in the video), this “painter’s painter” (as he has often been called) was reportedly discouraged by the traditional tastes he perceived in the Atlanta art scene.

In his essay for Creecy, MOCA GA’s first full-length, hardcover publication produced in conjunction with the exhibition, Dan R. Talley asserts, “Creecy was painting process personified.” Viewers are immediately struck by Creecy’s compellingly varied handling of his medium in the wall-sized pair “One of Those Days (Just?)” (1992) and “The Opening” (1978). Stalactites of ultramarine drip over a bubblegum pink ground, interspersed with puffs of brick-red, ribbons of taupe and gray, swirls of red, green, aqua blue, yellow, and a myriad of other combinations across “The Opening.” The viewer’s eye never rests as it scans every vibrant inch of the 8’x9’ canvas. To the right, in “One of Those Days (Just?),” the flat gray space seems to be scraped away in the center to reveal layers of drawings, linear patterns, circular doodles and remnants of angular type on a tan background. Creecy creates an all-over web of painterly marks that hover near the surface in “The Opening.” Yet, in “One of Those Days (Just?),” his worn and faded-looking marks suggest layers of marking waiting to be discovered beneath the surface.

“Afternoon with Dante?” (1974-1983) presents loosely brushed bands of translucent blue-green and gray that squiggle and meander across a mostly white field. Darker opaque gray-blue marks delineate borders and spaces, zigzags and hatch marks, and almost seem to form recognizable shapes (for example, a scroll?).  Painterly gestures that animate “Afternoon with Dante?” contrast markedly with the heavy white grid that restrains thick scribbles of white in dark black space in “Cut Through,” painted close to the same time (1977-1979). Talley describes Creecy’s working method as “essentially non-linear,” because he would return to ideas and rework paintings (like “Afternoon with Dante?”) for several years after they were first exhibited. The sheer volume of his work, and the breadth of inventiveness and variety that characterizes it, testifies to the artist’s obsession with process and infatuation with paint.

A “painter’s painter” has been defined as an artist whose emphasis on aesthetics, rather than content, means s/he makes paintings for other painters. However, the presentation of Creecy: A Survey of Major Paintings in MOCA GA’s Educational Resource Center, with didactic wall panels, documentary video and a display of clearly defined archival materials, allows even the non-painters in the audience to sense the artist’s complete absorption in his craft, and to feel the joy in every one of this painter’s painter’s paintings.