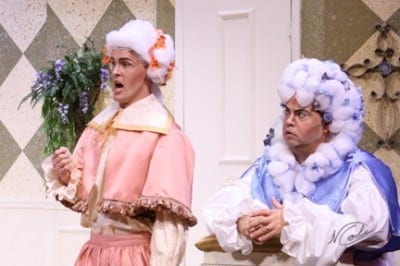 Bay Area composer Kirke Mechem, a name new to me, has built a substantial following for his opera “Tartuffe,” which premiered in San Francisco in 1980 and has been performed some 500 times across the country, mostly by school and smaller professional troupes. Now 85, the composer attended Capitol City Opera’s final performance of the work, Sunday afternoon at Oglethorpe University.

Artistic director Michael Nutter told me that the company hopes to make the first-ever studio recording of Mechem’s “Tartuffe.” There’s a live-performance tape used by Mechem’s publisher, G. Schirmer, but the composer has vetoed numerous requests to record the scaled-down chamber orchestration.

Full orchestra or nothing. Thus Nutter and Cap City hope to get the composer’s blessing and pursue grants ($50,000 or more) to hire a full orchestra and record it. It would be a major accomplishment for the community opera company, which has lived off its wits for most of its 26-year history. That’s a bit of backstory to explain what was at stake in Cap City’s well crafted and often insightful new production — albeit with cuts to the score, no chorus, no orchestra and just a piano and electric keyboard for accompaniment. But Nutter’s stage direction was pointed and clear, and the cast — a mix of talented students, veteran community singers and budding opera professionals — was among the strongest I’ve heard from this company.

Composer Mechem created a rhyming English translation of Molière’s 1660s French and retained the key dialogue; an evening-length play is also a long opera, about three hours (with two intermissions). Although the tunes aren’t very memorable, Mechem’s construction is very fluid, moving gracefully from semi-sung parlando to light arietta to ensemble numbers and back. The score — even in a piano reduction brilliantly realized by the multi-talented Catherine Striplin, with Valerie Pool adding effects on electric keyboard — tingles with ear-friendly modernism, evoking Prokofiev and Barber and with in-joke quotations from Wagner and Beethoven. (A knock at the door. Da da da dum. “Who’s that?” “It’s fate!”) As Tartuffe, baritone Wade Thomas (at left) was properly ridiculous, pudgy, short, dressed like a village priest with a dandy’s fashion flair. His black, leather-like skullcap added to his creepy style. (Miss Dusty Meeks’ makeup and powdered wig designs, all made of paper, were a highlight of the show. Pamela Cole’s costumes and Pete Cutter’s set worked nicely.)

John LaForge, who is Cap City’s board president, offered a convincing Orgon (lower photo, in blue), his basso voice rounded and his diction clear. As his wife Elmire, mezzo Heather Witt (at left in blue) had a big aria to open Act 3, and she sang it with full involvement. Orgon’s daughter, Marianne, received deluxe treatment from soprano Kat Uhle (top photo), a statuesque figure who offered lovely, piercing tones. Nutter showed his alert fusion of music and theater when Orgon queried his daughter about marrying Tartuffe. The girl’s repeated replies came with the same elaborate physical gesture, making the visual image match the musical motif. Very effective without overstepping it.

In the soubrette role, high-flying soprano Amber Brooke shined as Dorine, the sassy and all-knowing maidservant. Nathan Munson (top photo), the “cover” for the lead tenor in the Atlanta Opera’s upcoming “La Bohème,” sang an appealing Valère, with an Italianate gleam in his tone. Most impressive in the cast was Mark Diamond as Orgon’s son, Damis (lower photo, in peach). The Augusta native spent the summer in the young artists’ program at the prestigious Glimmerglass Opera, and here his powerful baritone, sweet timbre and nuanced, expressive phrasing suggested a serious professional career in his future. In this production, almost everything was in place. Even Elizabeth Barsalou, a high school musician as the elderly maid Flipote, left a strong impression. At the end, clumsy and clueless, Flipote pirouetted to her own personal accompaniment as the household rejoiced, out of sync with everyone else. Hilarious. It’s that sort of theatrical savvy and smart attention to detail that consistently elevates Capitol City Opera’s productions to be among the city’s most memorable evenings in the theater.