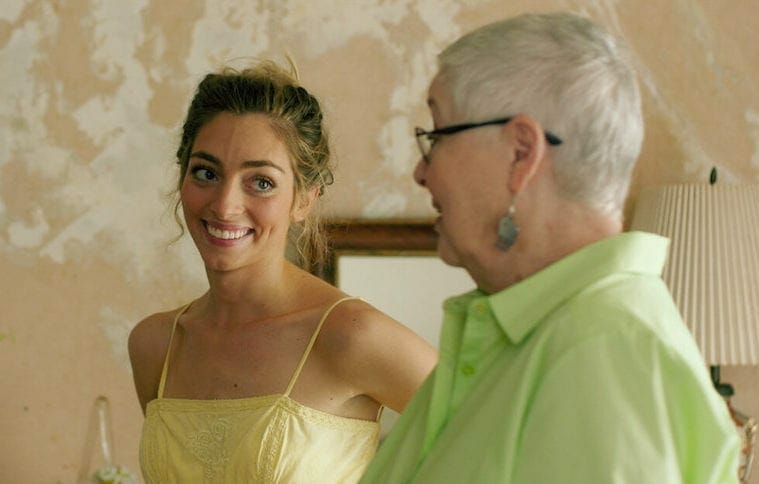 Bo Bartlett always knew what his first feature film would be about — he just didn’t know it would take decades to make it. After putting aside directing for a while to focus on his artwork, Bartlett — known internationally as an American realist painter — has returned to film with the drama THINGS DON’T STAY FIXED (89 minutes), now available on Amazon Prime, Apple TV and other streaming devices.

Bartlett began dreaming of the project in the 1980s, when he was studying at the Pennsylvania Academy of Fine Arts. After attending New York University’s Tisch School for the Arts, he started the script with colleague Sandra Deer, a playwright and one-time Alliance Theatre literary manager and artistic associate.

They worked on it almost five years and optioned it, but Bartlett eventually took a job making the documentary Snow Hill, about painter Andrew Wyeth.  “By the time I was finished with that film I was more excited about painting than I was about filmmaking,” Bartlett says. Over the years he made more documentaries and short films, but they were something of a side gig to his art-world responsibilities. 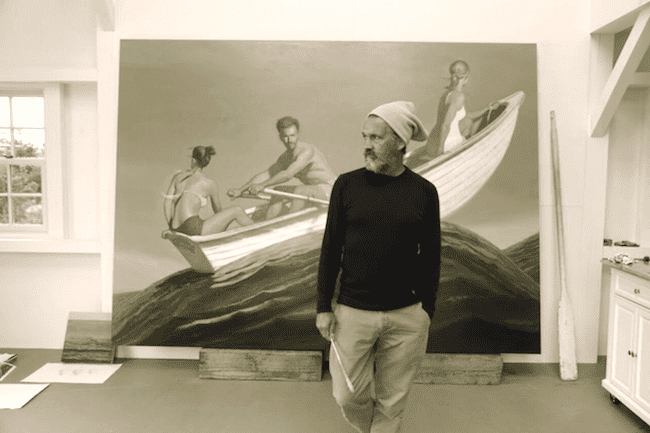 Bo Bartlett, known internationally as an American realist painter, was a filmmaker before he turned his attention to art and, recently, back to film.

Bartlett moved back to his native Columbus, Georgia, in 2016 to be with his aging parents and build the Bo Bartlett Center at Columbus State University. Seeing the film industry growing in Georgia, he sensed it was finally time for Things Don’t Stay Fixed. The film is a Southern Gothic drama about father and photojournalist Sam Grace (William Gregory Lee) who comes home and tries to put a halt to the wedding of daughter Nina (Melissa Saint-Amand of Ozark) but realizes he himself must forget the past and move forward.

Bartlett hired a number of Columbus actors (including Saint-Amand) and crew from Columbus State University’s Georgia Film Academy. He directs and his wife, artist Betsy Eby, is an executive producer. Atlanta actors, too, are plentiful in his cast — Brenda Bynum, Tara Ochs, Jackie Prucha and David Silverman, among them. “Most everyone is from Georgia or Southern,” Bartlett says. “We didn’t want people faking accents.”

Things Don’t Stay Fixed was filmed in Columbus over 21 days in 2017, with every scene was set around a specific site. “There have been films that have been shot here but not any that used Columbus as Columbus,” the director says. “We wanted this to be a love song to Columbus.” He and Eby self-funded the project and kept the budget to about $200,000. 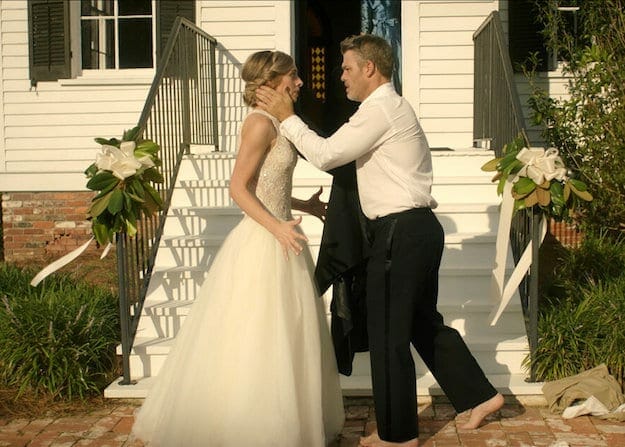 A scene from “Things Don’t Stay Fixed” with Melissa Saint-Amand and William Gregory Lee as a daughter and father.

Editing was a slow process but Bartlett and his team eventually produced a two-hour product. Bartlett wasn’t sure about the film’s future, and then Hollywood’s Indican Pictures called him. Indican took the lead from there,  finishing post-production and publicizing it with Lionsgate in late February. Bartlett was relieved that his film would be seen and that he could stop working on it.

Things Don’t Stay Fixed gets personal. “It’s a version of my life,” Bartlett says. He always saw himself as the main character and on set the cast and crew laughed about how similar he and the character of Sam were.

His next project is the drama Hurtsboro, to be shot in Birmingham and Columbus. It deals with the Black Lives Matter movement. In it five men who are traveling are arrested for a murder they didn’t commit. Bartlett has a treatment, is looking for a writer and is quite happy to call himself a filmmaker again. “Things Don’t Stay Fixed is the reason I went to film school. This project has been a long time coming.”

As more COVID-19 vaccinations become available, and with crews  following safety precautions, area filming is robust again. The Georgia Film Office schedule shows more than 50 productions in progress. Here’s a look at some of the newer films and TV series shooting in the metro. 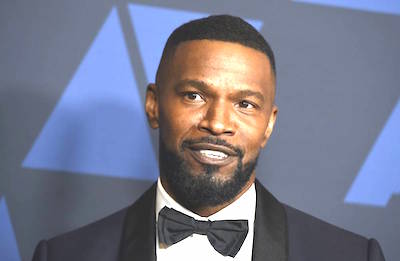 Jamie Foxx has finished one project for Netflix and is working on another, titled “Day Shift.”

Oscar winner Jamie Foxx headlines the cast of Netflix’s DAY SHIFT, playing a blue-collar dad taking care of an 8-year-old daughter. His pool-cleaning job is a front for his real vocation — hunting and killing vampires. J.J. Perry directs. Foxx also was in the area months ago to make the Netflix comic-mystery sci-fi piece THEY CLONED TYRONE.

AGENT GAME, an adventure thriller about a CIA agent blamed for a death he didn’t commit, features Mel Gibson and Dermot Mulroney with Grant S. Johnson (Nighthawks) directing. Early filming is taking place in Augusta. .  . . In Columbus, Beau Bridges headlines the due-to-be-wrapped THE NEON HIGHWAY, in which a young songwriter meets a washed-up country-music star.

Atlanta-shot perennials such as Dynasty, The Walking Dead and The Resident are still filming along with newer shows (Cobra Kai, Tyler Perry’s Young Dylan, Step Up and The Doom Patrol) and the final seasons of Ozark and Black Lightning, but there are some new kids on the block. 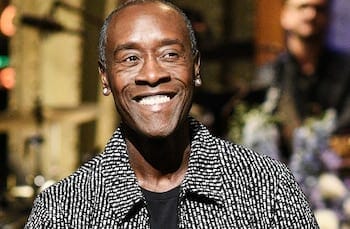 ABC’s reboot of the much-loved series THE WONDER YEARS should start filming locally in the next few weeks. It’s set in the 1960s, as the original was, but follows a Black middle-class family in Birmingham. The Wonder Years’ Fred Savage, who played the young Kevin Arnold all six seasons of the original, directs. Producer-screenwriter-director Lee Daniels (Monster’s Ball, Precious, The Paperboy, The Butler, TV’s Empire) is among the producers. The cast includes Julian Lerner, Amari O’Neill, Milan Ray and Elisha Williams. Don Cheadle narrates. 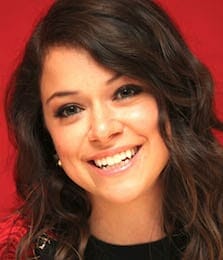 Tatiana Maslany is the She-Hulk on the Disney+ series.

The Marvel universe is safely going nowhere. Emmy winner Tatiana Maslany (Orphan Black) is the title character in the new SHE-HULK, while Tim Roth and Mark Ruffalo (as Bruce Banner, the Hulk) costar. Filming starts this month and is expected to continue through the summer, with Disney+ eyeing a 2022 air date. Kat Coiro and Anu Valia direct.

MEMORIES, also known as PTOLEMY GREY, is a six-episode Apple TV limited series with Samuel L. Jackson. It’s based on the 2010 novel by Walter Mosley. Jackson’s character is 91, largely alone in the world and facing dementia but is able to regain his memories and help solve his nephew’s death. It’s now filming now after some prep in March.

Expect to hear dates soon for several high-profile projects including the HBO series THE STAIRCASE, with Harrison Ford as a man accused of killing his wife, and the Paramount feature film SENIOR YEAR, with Rebel Wilson as a 37-year-old who awakens from a 21-year coma and returns to high school to be a cheerleader. Full casts and crew will be announced soon. Warner Bros.’ SHAZAM 2, a sequel to its 2019 hit, expects to announce a production schedule soon.