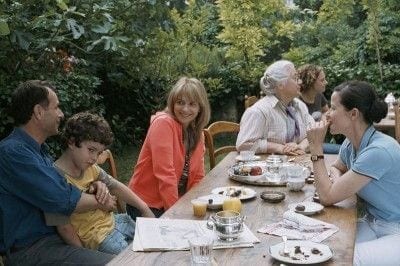 A stylistically restless filmmaker, writer-director Olivier Assayas has ranged from a behind-the-scenes valentine to moviemaking with “Irma Vep” to the junkie-goes-12-step saga “Clean” (both starring his fabulous ex-wife, Maggie Cheung). He’s also explored the worlds of cyberporn and sexed-up international skullduggery in “Demonlover” and “Boarding Gate.” So maybe it’s no surprise to see him downshift once again, this time delivering a stately-country-home movie, “Summer Hours.”

A quiet contemplation on possessions, family relations and the fluid value of objects (their monetary worth versus sentimental attachments), the movie centers on the rambling estate of a famous (fictional) French painter, whose niece has outlived him and continues to stoke the flames of his posthumous reputation.

Helene (Edith Scob) has kept her uncle’s house as a 20th-century arts shrine, with treasures including two Corot paintings — which her grandkids shrug off as dull remnants of “another era.” Her adult children only visit once or twice a year, so on the occasion of her 75th birthday, she decides it’s time to discuss what happens to the house and its holdings when she dies.

Youngest son Jeremie (Jeremie Renier) is a businessman in China. Adrienne (Juliette Binoche) is an aging-hipster designer based in the States. Only eldest son Frederic (Charles Berling) lives in France, though in a time-honored way his middle-of-the-road stability is taken for granted, compared to his siblings’ more colorful lives. (Even Frederic’s mother seems genially indifferent to his status as a well-regarded, published economics professor in Paris. “It rings a bell,” she says, hearing about his latest book.)

What you’d expect to happen, happens: The siblings reconvene a year or so later at the estate to divvy up the property. As for plot? Well, absolutely nothing and absolutely everything follows. “Summer Hours” isn’t the familiar sort of conveyer-belt drama, in which Dark Secrets are unearthed, and characters have red-faced screaming matches followed by healing tears. Thank God.

Instead this is a movie full of delicately observed moments and interactions — and the occasional, nicely judged payoff. (The tale of the estate’s long-suffering housekeeper and her favorite vase is the closest the movie comes to a conventional “ah-ha” moment, but it’s sweetly satisfying.)

The film is strongest when the three main actors interact, with a shorthand knowingness that makes them believable as siblings. There’s a great scene when both brothers burst into laughter when Adrienne announces her engagement to a boy-toy; it’s all you need to know about her spotty relationship history. (That, plus the blonde dye job and too-young clothes Adrienne wears – and which Binoche gamely allows to cloak her innate radiance.)

The film is a gentle series of beautifully observed moments, with a melancholy sense of elegy that’s nicely counterbalanced by a Gallic savoir faire. People die, the movie says, and life goes on — and objects of value wind up in other hands.

“Summer Hours” is a curious collaboration with Paris’s Musee D’Orsay, which loaned the Corot paintings, Odilon Redon screens and art nouveau furniture that become the focus of the characters’ deliberations. Parts of the movie feel like a feature-length infomercial for the museum, but there are worse things to advertise.

If at times the movie threatens to border on the real estate-porn exemplified by those over-cossetted Merchant-Ivory movies of the 1980s and ’90s, well… it’s still welcome counterprogramming in a pre-summer-hours season already oversaturated with killer androids, Star Fleet cadets and Tom Hanks hyperventilating all over Vatican City.