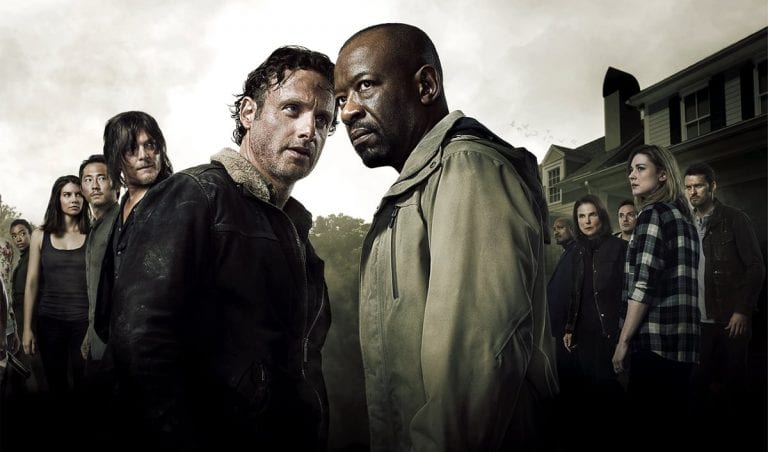 The Walking Dead was one of the shows threatening to pull out of Georgia had Gov. Deal not vetoed the so-called "religious freedom" bill.

It’s a decision that was met with enthusiasm by many inside the state and outside of it, including the filmmaking community, the LGBT community and the arts world. On Monday, Governor Nathan Deal vetoed HB 757, the so-called religious freedom bill, which the Georgia legislature had earlier passed. The bill could have had a devastating effect on Atlanta’s status as a filmmaking hub.

The bill had been called a license to discriminate, allowing groups to refuse service because of their religious beliefs. Its critics contend that it could be used to discriminate against the LGBT community. Just last week, North Carolina passed a similar bill. Deal had until May 3 to act on the matter — either signing it, vetoing or ignoring it, in which case it would have become law — but took action bright and early this week.

What led to his veto, the Republican governor claimed, is his desire for the state to be a welcoming one. In his press conference, Deal stated, “Our people work side by side without regard to the color of our skin or the religion we adhere to. We are working to make life better for our families and our communities. That is the character of Georgia.”

Although Deal said that outside threats did not affect his decision, the backlash certainly brought the filmmaking world together against the measure.

With its attractive tax incentives, Georgia has become the third heaviest filming area in the country behind Los Angeles and New York. Almost 250 films and TV shows were shot here in the last fiscal year, according to the Georgia Film Office, and contributed approximately $6 billion to the economy.

In recent weeks, both local and national businesses and sports organizations have come out against the bill. Last week, though, was when virtually all of Hollywood reacted. First off was Disney, whose Marvel films have become blockbusters, and several studios followed.

The Weinstein Company issued a statement explaining that if the bill became law, they would look for a new home for their film Richard Pryor: Is it Something I Said?, which will be directed by openly gay Lee Daniels. The statement read: “The Weinstein Company will not stand behind sanctioning the discrimination of‎ LGBT people or any American. We have plans in place to begin filming Lee Daniels’ new film in Georgia later this year, but will move the production if this unlawful bill is enacted. We hope Governor Deal will veto bill HB 757 and not allow sanctioned bigotry to become law in Georgia.”

Starz, Sony, 21st Century Fox, Lionsgate, Viacom, Netflix, CBS, Comcast and MGM also spoke out. AMC, which produces the shot-in-Georgia The Walking Dead, vowed to move the series if the bill was not vetoed, and then the local Tyler Perry Studios also issued a statement. “At Tyler Perry Studios, we believe in inclusion and equality for all people,” a spokesperson for the studios said. “We do not tolerate bigotry, division and discrimination. We have tremendous confidence in Governor Deal’s leadership and ability to continue to lead our great state forward and urge him to veto this bill.”

On the advice of Human Rights Campaign president Chad Griffin, many actors, actresses and directors — from Anne Hathaway and Julianne Moore to Dustin Lance Black and Gus Van Sant — signed a petition urging the governor to veto the bill.

Brian Tolleson, head of content and managing partner for Bark Bark, a branded entertainment firm with an office in Atlanta, New York and Los Angeles, works with entertainment clients all across the country. He had heard lots of comments from clients as the matter became more prominent. “At first we were trying to keep it a measured local response as the bill moved through the House and Senate,” he said. “It wasn’t in anyone’s best interest to involve the greater entertainment industry. We were certain that it would go away before it did any damage to the economy.”

It wasn’t until the bill was revived and crammed “with measures that were discriminatory in nature” that his colleagues thought it was best to call on friends in the entertainment industry that they had not previously engaged with. “At that point we realized our local warnings were not enough. We had to call our allies. I am so proud and grateful for those leaders who have come forward and said no amount of tax incentives will allow us to condone human rights violations. That makes me proud of the industry I am in.”

Many production companies in California are used to having film production largely to themselves for decades. They aren’t happy about the filming being done in Georgia and would look for any reason to be able to take back that which has left the state.

“This is an industry that many markets want — and California wants back,” says Tolleson.

Yet the fight might not be over. Republican lawmakers have threated to call an emergency session in an attempt to override the governor’s veto. If that fails, the matter will be front and center when the legislature assembles next year.

It’s a bill that could also impact the local arts world. With many industry professionals moving to the area, it is given a boost to local performing arts companies.

“The tax credits the state of Georgia has graciously given to the film and television industry have revitalized the entertainment industry, an industry we lost once and have worked so hard to regain,” says Ann-Carol Pence, co-founder and associate producer of Aurora Theatre. “These tax credits have been an incredible investment in the business of art. It has employed a lot of people. It has helped with business expansion. It has done all the things that good businesses do — it has been an economic engine to the tune of six billion dollars.”

Aurora Theatre can now regularly attract a deeper pool of performers to their stage because artists are calling Georgia their home. “It is not just actors but wig designers, set designers, costume designers, props designers, caterers,” says Pence.

Another issue is whether LGBT performers will be cautious about coming to a state with this type of bill in limbo.

Brian Clowdus, the artistic director of Serenbe Playhouse, thinks the bill would have deterred LGBT artists from coming to the area.

“LGBT performers I have worked with in the past would be loyal, but new LGBT performers or LGBT straight allies would certainly think twice about coming to work in Georgia,” he says.

Nonetheless, he was pleased, but cautious, with Monday’s veto. “As a creative, I want the film and TV industry to stay put,” he says.  “As for equality in Georgia, is our work done? No. But it feels like we are headed in the right direction. This was a good day for Georgia. Let’s hope it sticks.”