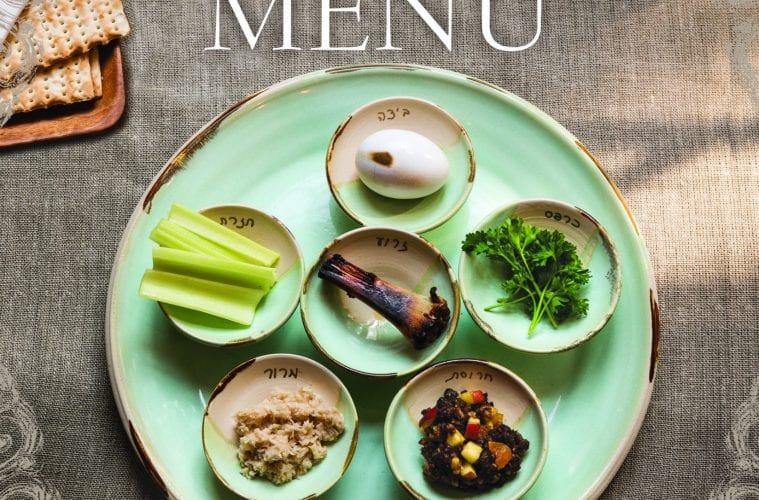 Paula Shoyer is buzzing around her spacious kitchen in Chevy Chase, Maryland when she pauses for a phone interview to discuss her latest cookbook, The New Passover Menu (Sterling Epicure, 160pp).

It’s only 10:00 on a Friday morning, but the married mother of four is already deep into preparations for that night’s Shabbat dinner. Surrounded by four open cookbooks, a chicken prepped for roasting, seasoned meat and bags of flour, she admits, “it’s pretty messy right now.” But if the energy and enthusiasm in her voice are any indication, Shoyer is obviously in her element. She anticipates her work will be done by 1:00 p.m., giving her plenty of time to change gears before welcoming guests at sundown.

“I try to enjoy my meals when I entertain. But if you’re cooking everything right before you serve it, then you’re not relaxed… you’re just tired.” Shoyer has come a long way from her days as an attorney with a practice in environmental law and insurance litigation. And she could not be happier.“When I practiced law, I made people happy to some extent,” she explains, “but not the way I do now.”

What she does now – between writing cookbooks – is teach classes in French pastry and Jewish cooking in the DC area, develop desserts that are dairy-free, gluten-free, sugar-free and vegan and travel the world extolling the virtues of building great food memories around special holidays and ordinary days.

Her insights on all of the above will be on the menu when the Marcus Jewish Community Center hosts Shoyer for a master cooking class, and an author talk & book-signing on Sunday, April 10. Participants will learn how to prepare soups, salads and entrées and get a primer on working with egg whites (“because sponge cakes are all about the egg whites,” according to Shoyer) just in time for Passover, which begins on April 22.

The eight-day holiday commemorates triumph over oppression as Jews celebrate the Israelites’ Exodus from Egypt. But the rituals required to retell the story through food requires imagination and commitment, particularly when ingredients like bread, rice, corn, oats, rye, spelt, barley, legumes and pasta are forbidden, or chametz. Likewise, leavened food or food that has come in contact with leavened products are chametz. And the utensils, cooking and baking equipment used to prepare or serve a Passover meal must meet strict guidelines.

It’s no wonder Shoyer quips that, “Jews who host the holiday often feel that preparing the house and food for Passover makes them feel a little too much like the Israelite slaves.” The New Passover Menu, however, was written to set chefs free. Divided into eight menus to help mitigate the challenge, there are two Seder menus, one each for Shabbat and Yom Tov and four weekday menus.

Shoyer says time management and organization are as critical to success as following her recipes. “Start modestly and figure out what you can manage,” she suggests, “make lists and break things down into manageable chunks. Consider what you can do in advance [making salad dressings, chopping vegetable and storing them in sealed containers and cleaning and seasoning meats first thing in the morning] can minimize last-minutes sprints to the dinner table and eliminate stress.” Putting herself in the shoes of amateur chefs, Shoyer was mindful about keeping her recipes simple. And though she finds constant food inspiration when traveling internationally, she cautions against doing away with traditions during the holidays. “Don’t get in the habit of always doing the latest and trendiest foods for the holidays and shabbat. If you forfeit brisket, matzoh balls, kugels in favor of the latest food trends, you lose the chance to have a rich association of food and ritual.”

Creating connections between food and ritual is probably one of the simplest yet most profound legacies any cook can leave behind, as is obviously the case when Shoyer talks about her biggest influence in the kitchen – her own Grandmother. Her voice drops an octave and takes on a tender, almost childlike tone while recollecting the family matriarch.

“I remember my Grandma Sylvia sitting at her kitchen counter in Brooklyn, watching as she measured ingredients with her hands. I remember her mixing with the wooden spoon when she was 70… 80… 91 years old. That was my first real experience with delicious homemade desserts.”

Shoyer’s conviction that “there is an innate generosity to bakers’ souls,” likely stems from her formative years in Brooklyn. But personal experience has confirmed her belief that patience and sweetness are two characteristics shared by bakers everywhere from Israel, which she calls one of the most exciting dessert travel destinations in the world, to Asia and Europe.

“Most people are not baking because they want to sit at home and eat an entire cake. They’re baking a cake because someone’s coming over… to surprise their kids a special treat when they come home from school… because a baby was born or someone died. They are baking to share, and give and bring communities together.”

After trying and failing to replicate her beloved grandmother’s flakey rugelach and seven-inch yeast cake, Shoyer, who graduated from the Ritz Escoffier pastry program in Paris, learned a valuable lesson in hindsight. “The one thing I tell everybody is if your mother, grandmother, grandfather is the great baker if the family and has the great recipes— don’t just get the recipes before they die. Get the recipes and make them with the person if you can.”

Lastly, she emphasizes: Enjoy the ride! “Our days are kind of ordinary. Everyday in life is not going to bring a promotion on the job, a marriage proposal or a wonderful present. But eating something delicious takes moments, and can bring you such joy.”