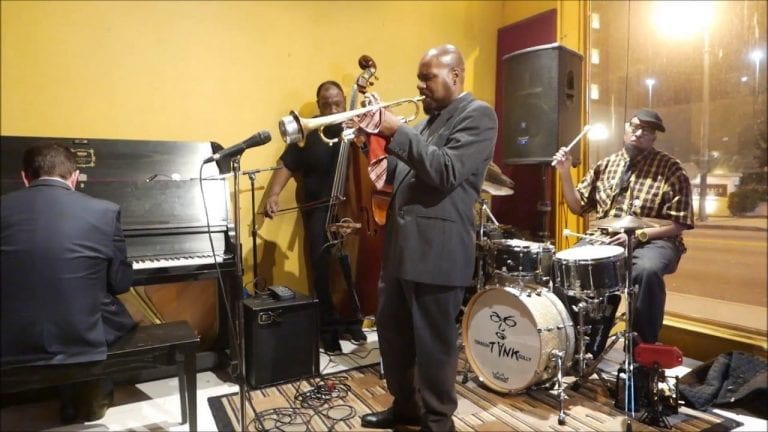 Three years ago this weekend, Churchill Grounds, the jazz venue nestled next to the Fox Theatre, closed its performance room adjacent to the bar. The venue found a second life in the cozier confines of the bar, but now after running the show for nearly 20 years, owner Sam Yi is closing the doors.

As a goodbye, and a fundraiser to aid the move to a new location, trumpeter Russell Gunn will perform the final Churchill concerts with an all-star band on Friday, Saturday and Sunday. Cover is $20.

For years, Gunn performed at the club weekly. Though the trumpeter hasn’t held a regular spot for quite some time, Yi said Churchill is indebted to the performer. “He’s the biggest influence as far as musicianship and length of tenure,” Yi said. The owner noted Gunn is flying in from France, where he is currently on tour with bassist Marcus Miller, for the occasion.

Yi is “actively looking” for a new Churchill Grounds location, but hasn’t been able to find the right space. He had originally planned on taking two months off and re-opening a club in October.

When Yi closed Churchill’s performance space, the Whisper Room, in 2013 after a 10-year run, he said it had to do with a significant increase in rent. He leases the space from the Fox Theatre and could no longer keep the performance room open in the face of dwindling revenues. Now the bar’s lease is up, and the rest of the venue is going the way of the Whisper Room. Yi has heard it will become a VIP area for Fox concertgoers.

“Jazz music is not the most popular form of entertainment,” he said. “It’s a struggle to have this kind of business.” He noted that he’s seen too many jazz clubs come and go in the past two decades, but that he’s committed to making sure Churchill Grounds lives on, in one form or another.

“When will it open up?” he said. “I really have no definite time frame.”

Guitarist Jacob Deaton, like many other local jazz artists, grew as a musician during jam sessions and gigs at Churchill Grounds. Yi cultivated Deaton’s musical development by requesting original compositions and encouraging him to hone his own voice.

“Sam’s club instantly became the proving ground for all of my music,” Deaton said. “There’s not a lot of jazz spots in Atlanta that welcome that sort of thing.”

Over the last few years, change has been the name of the game in the Atlanta jazz scene. After Joe Gransden’s long-time, extremely popular jam session was forced from Twain’s in Decatur, the trumpeter found a second act at Venkman’s on Ralph McGill Boulevard (Tuesdays at 9 p.m.). Trumpeter Gordon Vernick’s quartet now leads a Wednesday night jam session at the Red Light Café. These venues are only occasional jazz spots; Yi presented jazz at Churchill at least five nights each week.

Saxophonist Mace Hibbard, who has performed with his own band and others at Churchill Grounds numerous times over the years, said he formed close friendships and nurtured his creativity at the venue.

“Some of my most lasting musical memories occurred at Churchill Grounds,” he said. “While I am sad to see the current location closing, I will support Sam Yi wherever he relocates, just as he has supported me and the entire jazz community for so many years.”

Singer Laura Coyle last performed with her band at Churchill Grounds on July 13. Though it was a Wednesday night in the middle of summer, Coyle said the room was nearly full. News of Churchill’s closing had long since made the rounds, and Coyle said the mood was a tad bittersweet for both her band and the audience.

“It’s hard to imagine Atlanta and the jazz scene without Churchill Grounds, but I saw a lot of people enjoying it to the fullest while it lasts, taking a seat at the bar, and getting Sam’s recommendation on a Scotch, listening to the music and seeing friends,” she said.

Coyle said she connects with the community aspect of Churchill Grounds. It’s a performance space, but it’s also a training ground for young musicians. As an emerging singer, Coyle spent a lot of time at Churchill’s weekly jam sessions, which were originally run by Danny and Terry Harper. The Harpers would give her gentle advice and encouragement.

“It meant the world to me because these are all very accomplished musicians, and I was trying to find my own way,” Coyle said.

Like her fellow musicians, Coyle appreciated that Yi encouraged artists to get out of their comfort zones. “When you come here to play, you know you can try new things, explore what you’re passionate about,” she said. “Churchill Grounds is a special place, and I am really going to miss it.”

While Churchill may not have always been packed with eager listeners (I remember one Kingsized performance where I was one of the only customers in the Whisper Room), the venue has always been an important part of the Atlanta jazz scene. After this weekend, there will be a void in Atlanta jazz; for his part, Yi is working tirelessly to find a new space so he can fill that emptiness with music.