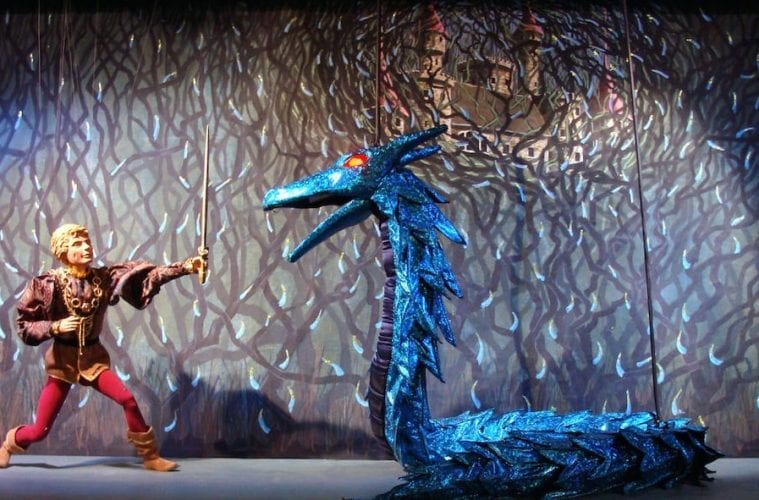 [This article is brought to you in partnership with artcloud. Artcloud is a personalized tool for curating an art collection — whether you are an artist, gallery, or collector. With this social network and built-in marketplace, you can browse thousands of artworks by price, keywords, color, and more through the artcloud app.]

It’s not unusual to see families at the Center for Puppetry Arts. Seeing them onstage together, however, is a far rarer thing.

A touring marionette production of Sleeping Beauty, playing through July 31, offers a lovely, classic take on the old fairy tale, with a cast and crew that’s “all in the family.” The National Marionette Theatre was founded in Erie, Pennsylvania, in 1967 by David A. Syrotiak, and it is one of the oldest continually running marionette companies in the United States.

Even in 1967, Syrotiak’s work must have seemed like a charming throwback: from the beginning, puppets were painstakingly created, sets built and backdrops painted all by hand. The work has a lovely old-fashioned, Old World look, and his approach seemingly eschews the layers of wink-wink irony that often pervade contemporary productions for children.

All four of the Syrotiak children — Maggie, Catie, David Jr. and Peter — have operated puppets and voiced characters for the National Marionette Theatre. The current production is performed by David Jr., his wife, Marianna, and Steven, their young son, the third generation of Syrotiak to carry on the legacy. (The elder Syrotiak is now in his 70s and has retired from shows on the road).

One of the challenges of marionette performance is manipulating the puppets in such a way that it appears that the puppet, suspended by string, has weight, that it’s grounded to the floor. Making a marionette look like it’s flying is a cinch, but making it look like it’s walking takes a lifetime of study.

This is masterfully handled by the group, and there’s often a trippy sense of vividness and detail to little movements. Syrotiaks’ style also includes the innovation of using an elbow string and a central yoke string on the marionettes’ arms, which adds a subtle sense of limber jointedness to the gestures. Puppeteers perform in black but in full view of the audience above and behind the small painted backdrops.

The classic approach in the narrative could unfortunately also become storybook stiffness, conventionality and formality, an aspect of the production not helped by the fact that all the sound, including music and dialogue, is pre-recorded (the use of parts of the score from Tchaikovsky’s Sleeping Beauty is actually a nice touch, however).

Still, in the end, it’s hard not to be charmed by the overall effect, by the seriousness, attention and dedication with which the Syrotiaks approach their work in a culture that has opted for the broad brush. Some of the story’s elements — a beautiful princess, magical fairies and a final kiss — would seemingly make it a better fit for girls. But I brought two nephews and they loved it, as did I, as did my own father who came along with me in case the shrimps got out of hand. Fortunately, they never did. A spell cast by a family clearly works its magic across generations, too.