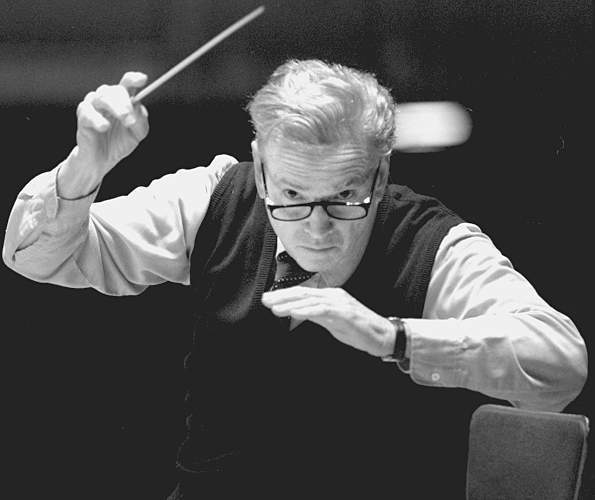 Louis Lane was the ASO's principal guest conductor through 1988.

Two people key to the development of classical music in Atlanta have passed away.

Louis Lane, who was co-conductor for the Atlanta Symphony Orchestra from 1977 to 1983, then its principal guest conductor through 1988, died on Monday at the age of 92. He was a resident of Bratenahl, Ohio, a village on the outskirts of Cleveland.

Lyric soprano Irene Callaway Harrower passed away on Sunday in Dallas, Texas, from complications related to Alzheimer’s disease. She was 87 years old.

For many years, Harrower was a resident of Atlanta and a significant presence in the city’s classical vocal music scene as a singer but especially as a pedagogue.

“She was a wonderful, well-respected teacher,” says W. Dwight Coleman, professor of voice and coordinator of external affairs at Georgia State University’s School of Music, where Harrower and her late husband, bass-baritone Peter Harrower, founded what became the Harrower Summer Opera Workshop, which remains a hallmark summer program at GSU. After Peter’s death in 1988, she continued teaching master classes through 2007.

“Her philosophy was one of not just singing well, but of having great diction,” says Coleman.

Born in Murfreesboro, Arkansas, in 1929 to Wallis and Cora Ada Callaway, Irene Harrower entered college at the age of 16. She attended Lon Morris College and Henderson State University. She attended the Berkshire Music Center (now the Tanglewood Music Center) in Lenox, Massachusetts, and subsequently pursued her singing career in New York City.

She received a Fulbright Scholarship in 1954 that took her to Rome, Italy, where she performed with Teatro dell’Opera, Orchestra dell’Accademia Nazionale di Santa Cecilia, the Orchestra of Radio-Television Italy and other European companies such as Vienna Volksoper and at the Festival international d’Art Lyrique in Aix-en-Provence, France.

It was there she met bass-baritone Peter Harrower. They married in 1957 in Rome and after several years moved back to the United States to settle in Atlanta, Peter’s hometown.

After relocating, the couple each appeared as soloists with the Atlanta Symphony Orchestra on multiple occasions, under the batons of both Henry Sopkin and Robert Shaw. They traveled to sing with the Lyric Opera of Chicago and also performed concert tours as a duo. Irene Harrower eventually dedicated herself primarily to teaching in her private vocal studio and the annual Harrower Summer Opera Workshop.

Louis Lane had strong ties to Atlanta and, as a conductor, he was known for imaginative programming and a wide range of repertory.

“He had a great knowledge of orchestral literature and its styles,” recalled Alvin Singleton, who was composer-in-residence with the ASO during the latter part of Lane’s tenure with the orchestra. Lane recorded two of Singleton’s compositions with the ASO, “A Yellow Rose Petal” and “After Fallen Crumbs,” originally released on the Nonesuch label. “In working with him, I learned new things about those pieces.”

Lane also recorded music by Ned Rorem with the ASO, sharing the podium with Robert Shaw for a CD on the New World label that won the 1989 Grammy Award for “Best Orchestral Performance.”

Born on Christmas Day, 1923, in Eagle Pass, Texas, Lane began taking piano lessons at the age of 5. He studied composition with Kent Kennan at University of Texas, where he earned his Bachelor of Music degree in 1943. He then served in the U.S. Army’s Field Artillery Corps for three years during World War II. Afterward, he resumed music studies in 1946, including composition with Bohuslav Martinů at Tanglewood.