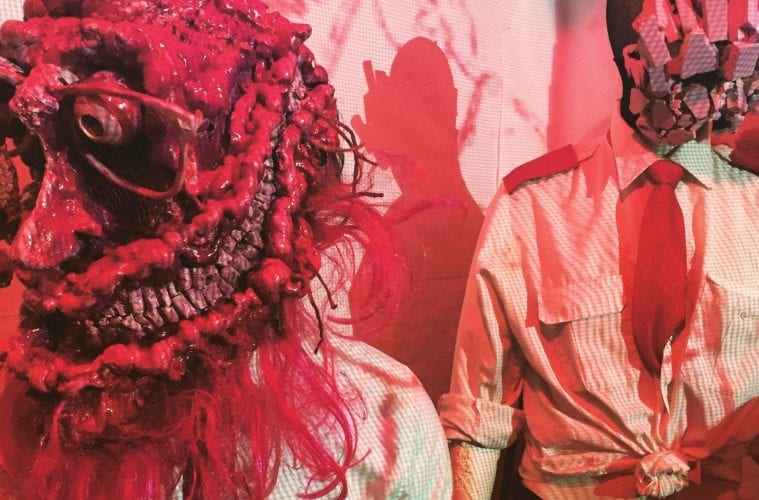 Review: “I Fucking L*** You” shows off the raucous underbelly of Atlanta’s art world Kibbee Gallery looks like the inside of a pink My Little Pony lunchbox on Valentine’s Day. Every surface was bedecked in pink drawings, pink paintings and Victorian pink living mummy sculpture fashion statements. A crowd of emerging Atlanta art insiders (the younger generation at least) showed up wearing their best shades of blush and ready to dance, get buzzed and make out with a genderqueer performance artist. The over-the-top, saccharine-sweet, Valentine-themed installation I Fucking L*** You Too by George Long, Mike Stasny and friends — otherwise known as IFLY — took mass-produced, schlocky sentimentality and turned it into a bacchanal of epic proportions. Indeed, the opening for this show felt more like a house party than fine art show, but perhaps that was precisely Long and Stasny’s agenda: I Fucking L*** You Too was a classic art school party meant to bring together all the creatives who have come to find Atlanta home. Exactly whose work belonged to whom at I Fucking L*** You Too was a bit tricky to discern. When I showed up to preview the show a few hours before opening, Stasny said a number of people had dropped off work without leaving notes about who it belonged to, what it was called or what it was priced. Approximately one hour before the opening, Kibbee Gallery was naming and pricing works on the fly, writing labels onto the Valentine craft paper that covered the walls. Regulars within the scene would immediately recognize signature styles of several local artists. Molly Rose Freeman contributed one of her signature fractal pattern drawings — in pink, of course. Some of the artists contributed work completely unlike their usual style. Margaret Hiden made a 6-foot sculpture of a jellyfish-like creature made of discarded plastic. Also — of course — pink. Some work, perhaps unintentionally, provided both form and function for the party. Jessica Caldas installed a tangle of handmade body pillows evocative of intestines; during the opening party, these works served as baby bumpers for the rowdy, drunk crowd swirling about the first floor of the gallery. This is the second pink-drenched show for Stasny and Long. The first I Fucking L*** You in 2014 celebrated friends of the arts in Atlanta by naming sculpture pieces after local leaders. For this latest iteration, the duo collaborated once again on these wacky sculptures that feature ripped up and repurposed stuffed animals, scrap wood and other thrift store tchotchkes. These works are both lighthearted and a bit terrifying: The use of salvaged materials brings to mind both construction and destruction, reflecting love’s ability to build up our hearts, but also tear us apart from the inside.

During the opening, George Long oscillated between manning the DJ booth as “DJ Dad Bod,” selling stuffed animal masks and chatting with friends who had been roped into modeling. He was one of the ringleaders for the evening, making sure everyone was having a good time. The beer ran out at 10 p.m. and things immediately started to cool down — the undanceable music queued time to go to the next event. It seems the goal of this show is mostly to have a party and bring the art community together for an evening of fun. Let’s face it, artists probably can’t afford a $500 Valentine’s Day evening at Bacchanalia, but a love-themed house party filled with art brought together folks from across the creative community. Victoria Camblin, editor of Art Papers, was there introducing everyone to everyone. Even Alan Avery had come from uptown to party with the kids, proving his dedication to being engaged with all aspects of the local art community. I only wish that an event like this could draw in people who aren’t already part of the in-crowd of artists. I Fucking L*** You Too felt a bit “by artists, for artists,” and I wondered how many people were new to this scene. Parties like these could be a great way to connect arts-interested people to actual artists. This kind of art event is exactly what the Atlanta community needs right now. Creating cohesion among artists can be hard, especially when there is a sense of competition amongst everyone. I Fucking L*** You Too brought together so many local creatives in a space free from attitude and one-upmanship. This wasn’t a stuffy, snobby party with hootie-hoos dressed in black making droll comments about the art. It was a chance for artists to let loose, get sloppy drunk with each other and make hazy memories to be laughed at at a future date.