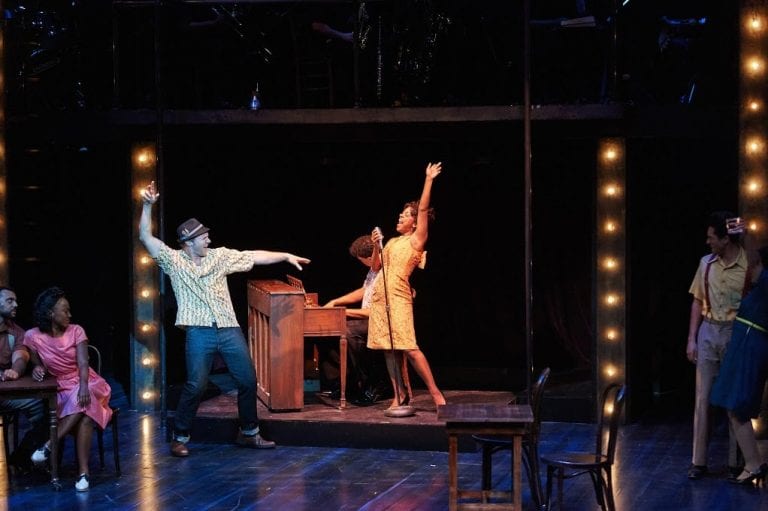 When nominations for the 11th annual Suzi Bass Awards were announced Monday night at the Horizon Theatre, a set of musicals dominated. Aurora Theatre and Theatrical Outfit’s Memphis, David Bryan and Joe DiPietro’s Tony Award-winning production loosely based on the life of Memphis disc jockey Dewey Phillips, led with 13 bids while the Alliance Theatre’s world premiere Tuck Everlasting, based on Natalie Babbitt’s book, was right behind in second place with 12.

The Suzis, named after the late Suzi Bass — a beloved local actress — recognize the best in Atlanta theater. In an exceptional 2014-15 season that saw tremendous work almost across the board, the Alliance Theatre led all theaters with 51 nominations. Theatrical Outfit followed with 24 and Actor’s Express had 21.

Tom Key, the artistic director of Theatrical Outfit who also directed Memphis, was overjoyed the next day. “I’ve had this smile fixed on my face and in my heart all day today just how proud I am for all our Theatrical Outfit artists being honored in this special way,” he said. “This is already going to be a ‘wow’ night for (us).”

The musical field saw no major surprises in it nominations. Competing with Memphis and Tuck Everlasting for Outstanding Production of a Musical are Chasin’ Dem Blues at Kenny Leon’s True Colors Theatre Company, Evita at Serenbe Playhouse and Rent at Actor’s Express. All are worthy productions, but I do wish Actor’s Express’ Murder Ballad had made the cut instead of the unevenly cast Rent.

Brian Clowdus, who directed Evita and is up for Best Director of a Musical, also saw his play The Secret Garden land several nominations. “I am really excited that (both shows) are well represented,” he says. “The great thing is that this night brings the community together — it’s about celebrating Atlanta theater.”

Outstanding Lead Actress in a Musical nominees are Molly Coyne for My Fair Lady at Georgia Ensemble Theatre, Randi Garza for Evita, Sarah Charles Lewis for Tuck Everlasting, Naima Carter Russell for Memphis and Julissa Sabino for Rent. This is a stellar field without a clear favorite.

The five men competing for Outstanding Lead Actor in a Musical are Charlie Brady for Evita, Carey Curtis Smith for My Fair Lady, Travis Smith for Memphis, Will Swenson for Bull Durham at the Alliance and Jeremy Varner for Rocket Boys at The Legacy Theatre. This is another tough call with Smith perhaps an early favorite. Had Atlanta Lyric Theatre submitted their Catch Me If You Can from the spring, however, Jeff McKerley would have been a serious contender.

In the Best Play field, the nominees are Blues for an Alabama Sky at Alliance Theatre; Edward Foote at Alliance Theatre, written by acclaimed Atlanta writer Phillip DePoy; The Elephant Man at Georgia Ensemble Theatre; Silent Sky at Theatrical Outfit, penned by former Atlantan Lauren Gunderson; and The Whale at Actor’s Express. A case could be made for each of them.

The beauty of awards shows is that they acknowledge the best of each year; the sad truth is that the law of averages dictates that not everything can fit cozily into five spots. Sadly, Horizon Theatre and Aurora Theatre’s Vanya and Sonia and Masha and Spike —  my favorite play of the season — was left out in all categories.

The five women contending for Outstanding Lead Actress in a Play are Cynthia Barker for Uprising at Horizon Theatre, Danielle Deadwyler for The C.A. Lyons Project at Alliance Theatre; Crystal Fox for Blues for an Alabama Sky, Ann Marie Gideon for Edward Foote and Park Krausen for Les Liaisons Dangereuses at Actor’s Express.

Deadwyler didn’t even realize she had been nominated at the announcement ceremony. She was clapping so hard for Barker’s nomination that she didn’t hear her own name. “I had a guttural reaction and I missed my name and everyone turned around and looked at me,” she said. “I am shocked.”

Possibly the most loaded field of the night is Outstanding Lead Actor in a Play, with Freddie Ashley for The Whale at Actor’s Express, Terry Guest for Marcus; or the Secret of Sweet at Actor’s Express, Tyrone Mitchell Henderson for Blues for an Alabama Sky, Jonathan Horne for The Elephant Man and Eugene Lee for How I Learned What I Learned at True Colors.

How competitive is this category? That Jeremy Aggers and Steve Coulter couldn’t sneak in for Edward Foote is a testament to the depth. The real heartbreak, though, is Bill Murphey’s omission. A talented and highly respected character actor, he was perfect in Vanya and Sonia and Mosha and Spike. His speech at the end of the play was a highlight of the entire theater season.

Given all the possible nominees, it wasn’t a complete shock that Stage Door Players’ Rabbit Hole was overlooked. Nonetheless, its absence in the Best Ensemble of a Play was a disappointment — and Patricia French’s supporting work deserved a nomination.

Yet there were several pleasing nominations. Deadra Moore, who stepped down from her duties coordinating the Suzis, grabbed a supporting actress nod for her work in Silent Sky, while David Crowe is nominated twice in the Best Director of a Play category for both Silent Sky and The Elephant Man. Anthony Rodriguez, artistic director of Aurora Theatre, was also surprised to see nominations for his company’s Clybourne Park and The Explorers Club, in addition to Memphis. “We are ecstatic about the nominations; it’s great that we have a variety of things nominated,” he said.

The Outstanding World Premiere award seems likely to go to the Alliance, with four of five nominations — Bull Durham, The C.A. Lyons Project, Edward Foote and Tuck Everlasting. Only Uprising at Horizon Theatre Company is a non-Alliance production. Edward Foote should have the clear edge here.

Isabel Curley-Clay and Moriah Curley-Clay, the set designer sisters, set a Suzi record with six nominations. Others with multiple nominations include Clay Benning with four and Ricardo Aponte, Kat Conley and Molly Coyne with three each.

In its third year, the TYA Suzis will honor professional theater created for younger audiences and families. The Suzis will also hand out the Spirit of Suzi Award, a Lifetime Achievement Award, the Callboard Award,  the Volunteer of the Year award and the Gene-Gabriel Moore Playwriting Award to an Atlanta playwright. The public votes on the Audience Choice Award for Outstanding Season.

The Suzi Awards Ceremony takes place Monday, November 2 at the Porter Sanford III Performing Arts and Community Center. A full list of nominations can be found on the Suzi website.