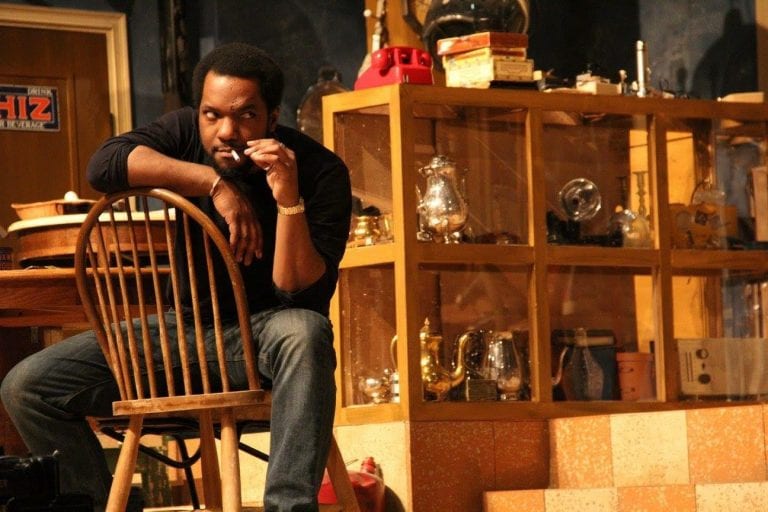 Ghant says he "gets" Mamet's heavy emphasis on dialogue.

For College Park native Neal Ghant (now starring in “American Buffalo”), it’s all in the Mamet

It’s a language many performers fear and avoid, but Neal Ghant has become pretty fluent in Mamet speak.

Mamet speak is the dialogue-rich, testosterone heavy style employed by inimitable playwright David Mamet. Ghant has become accustomed to those words and this week stars in his third Mamet production, American Buffalo, running through March 6 at True Colors Theatre Company at the Southwest Arts Center.

Buffalo is the play credited with moving Mamet into the big leagues after a celebrated Broadway run in 1977. In it, three crooks conspire to rob a man of his prized coin collection, but over an evening at the junk shop of one, their plans and loyalties change. Ghant plays the character Teach.

The actor looks at the trio of men as on the back end of their best years, with the good times almost over. “As new modern concepts meander into the neighborhood, they are becoming almost fossils as Chicago evolves,” he says. “We can see that now in our day to day. You drive around town and see areas that are condemned, falling apart, being bulldozed and refurbished, with condos coming in. There’s a definite correlation. Everybody can deal with the concept of being forgotten.”

True to Mamet’s style, the play is more about the nuances of how the characters interact. Contrary to the belief of some that Buffalo is about nothing but three guys sitting around talking, a lot of character work goes on.

“On the surface, you are not going to get explosions, or people jumping out of a house,” Ghant says. “It’s all about the conversation. Mamet is known for amazing conversations and this play does that — the intrigue, energy, angst, sorrow and happiness. The hope lies in the dialogue. I tell people to pay attention, because what every guy says matters; it’s not just for show.”

Ghant had a conversation recently with director John Dillon, who had read a theory that actors are divided between those who get Mamet and thrive under him, and those who don’t get it at all. “I fall under the category of someone who gets it,” he admits. “Something about the way he writes, I understand. When I read it, I see guys I know. My job as an actor is to make those words sound natural. I have always felt comfortable with Mamet speak.”

A native Atlantan who grew up in College Park, Ghant cultivated his career virtually entirely in the area, save for four years in Los Angeles. He did not receive any kind of professional theater training or education. Instead, he gravitated towards performing as a kid. He would record stories on tape, improv style, and perform in church shows. “There were guys who could run fast, guys who could jump far, and I could read and imagine things,” he said. “If someone needed something performed, I could do that.”

He was dabbling in professional acting even before he finished high school, starting with Freddie Hendrick’s Youth Ensemble of Atlanta at 7 Stages in the 1990s when he was 16. After that, it felt like acting was his destiny. “I was given all the tools outside of school to be an actor, to work and thrive and succeed,” he said. “The youth ensemble was very much a stepping stone.”

Afterwards he jumped into other roles. Before long, he had been in the business for three years, then it was a decade, then it was 20 years.

During that time, Ghant has become one of the city’s most acclaimed actors, working all over town, including the Georgia Shakespeare Festival and Theatre in the Square. Last fall, he headlined the Alliance Theatre’s version of One Flew Over the Cuckoo’s Nest as Randle McMurphy. He vividly recalls the energy level of the all-star Atlanta cast involved, most all of whom he had worked with before. “Everyone wanted this to be as great as possible,” he said.

Yet, Mamet has been a forte. The first time Ghant dove into a Mamet role, he won a Suzi Bass Award for Featured Actor for his part in 2007’s Glengarry Glen Ross at the Alliance. And in 2014, he won again for True Color’s drama Race, sharing a Best Actor award with co-star Andrew Benator.

“Race was intense and intimate,” Ghant says. “It was a small cast. The cast had two African-Americans and two Caucasians, so the dynamic of what we were talking about was part of the play. We knew we were going to attack the subject.”

He was featured in the 2000 film Remember the Titans and such television shows as Being Mary Jane and the upcoming series, Containment, about an epidemic that breaks out in Atlanta and leaves the city quarantined.

Ghant feels lucky to live in an area that gives him such opportunities in theater, television and film. As he has told and advised his son, “If there is something you love and are comfortable doing, you never really work a day in your life.”