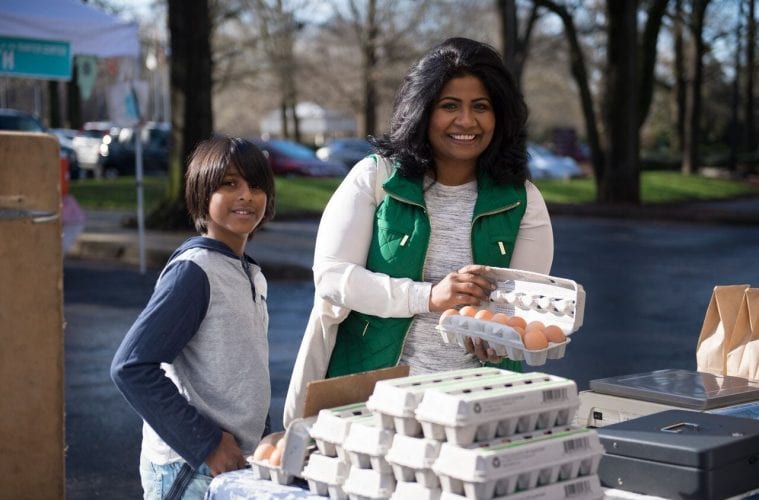 With “My Two Souths,” chef Asha Gomez connects the dots of cultural cuisines

Since moving to Georgia from New York 17 years ago, Asha Gomez, a native of Kerala, India, has left an imprint of her unique brand of Southern cuisine all over Atlanta. After finding success in hosting a popular weekly supper club, the chef opened her first restaurant, Cardamom Hill, in 2012. A few years later she opened her casual Indian patisserie Spice To Table, and is currently focusing on a new tea line.

Last fall, however, the chef and restaurateur added cookbook author to her resumé, with the release of My Two Souths: Blending the Flavors of India into a Southern Kitchen, which recently picked up a nomination for the 2017 James Beard Foundation Book Awards. What’s particularly significant about the nomination is that My Two Souths was selected for the American Cooking category, as opposed to the International category. For Gomez, this distinction is a promising sign of the times in America’s culinary landscape. “When you think of immigrant chefs and American cuisine, you think French and Italian, which have become part of the American landscape,” Gomez says. “The fact that my mother’s fish curry can also be called American is special.”

On its surface, My Two Souths is an approachable cookbook that introduces Indian spices like cardamom and turmeric to the American kitchen, primarily by incorporating a couple of these ingredients at a time into familiar Southern dishes. But Gomez’s James Beard-nominated cookbook quickly reveals itself to be a food-focused autobiography that simultaneously pays homage to Gomez’s immigrant experience and documents the multicultural nature of the American South’s current culinary identity.

My Two Souths is structured as an autobiography that traces Gomez’s journey from her birthplace on the southwest coast of India to her experience as an immigrant in the southern United States, and how the amalgamation of those two cultures ultimately influenced her career as a chef. Gomez partnered with acclaimed cookbook author Martha Hall Foose (A Southerly Course, Screen Doors and Sweet Tea) to write the book. Foose’s prose maintains a consistent narrative voice throughout My Two Souths, even when the book shifts from biography to recipes.

Each dish featured in the book is prefaced by a description of how the recipe has roots in a memory from Gomez’s experiences growing up in Kerala or as a working chef in Atlanta. Even the explanatory rundown of spices and other pertinent ingredients is drenched in story and memory. Gomez maintains that she’s a chef first — and not a writer in any sense of the word — but admits that she approaches cooking as a storyteller. “My food in so many ways has always been about storytelling,” Gomez says. “It’s just the way that I cook. I cook from memory, and stories and the experiences I’ve had around the world.” 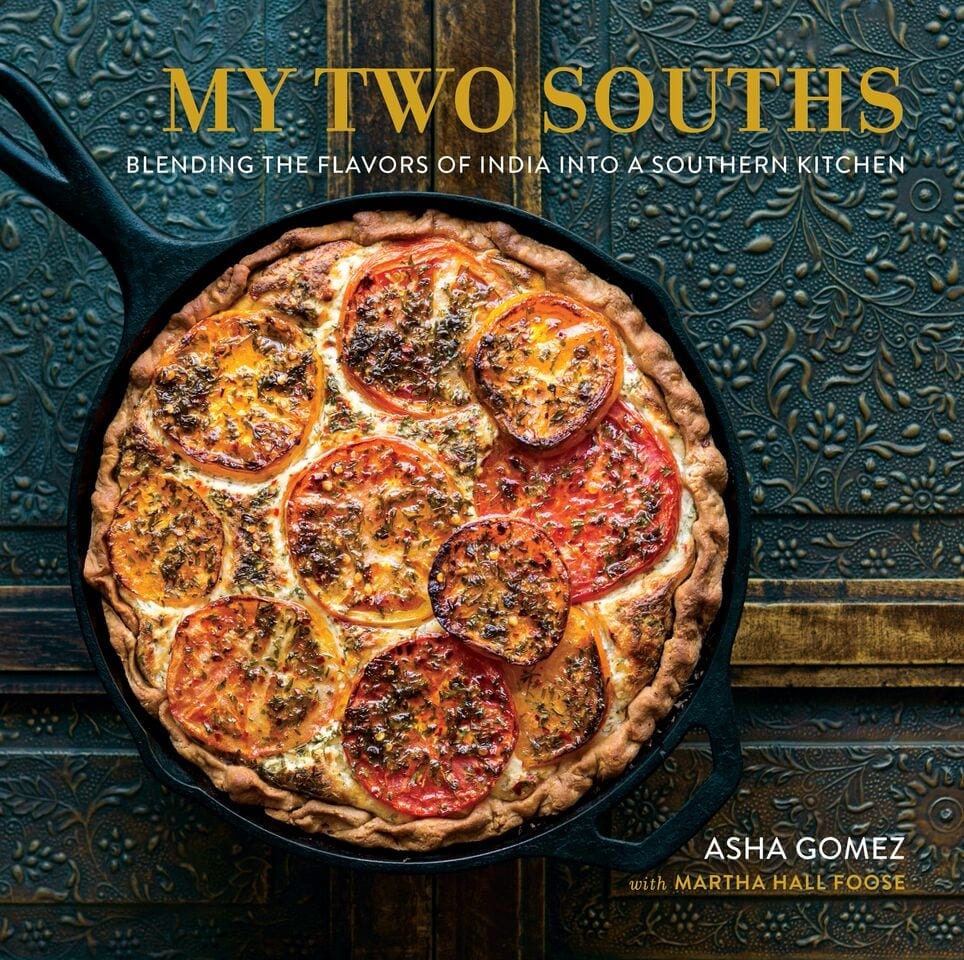 Some of those stories are drawn from Gomez’s childhood memories — like her mother making Cardamom Stewed Plantains for her when she was sick — others from more recent experiences as a working chef in the southeast — including the time when she prepared Pickled Catfish as a gift for John T. Edge (director of the Southern Foodways Alliance).

Together, these stories and their accompanying recipes suggest an innate symmetry between the two Souths that Gomez has called home, despite being separated by an ocean. “As I started cooking and delving into the cuisine of the American South I realized that there was so much we had in common,” says Gomez. “They’re both southern regions, they’re close to the water and have port cities with all kinds of external influences, and because of their proximity to the equator they grow the same types of produce. I just started being able to connect the dots.” With staples like rice and cane syrup (typically referred to as jaggery in India) in common, as well as a shared celebration of pork (yes, contrary to most regions of India, pork was introduced to Kerala’s cuisine in the 16th century by Portuguese missionaries), Gomez found the marriage of traditional Southern cooking with the distinct spices of southern India to be pretty natural.

However, she is quick to point out that it would be a mistake to refer to this merging as “fusion.” “Fusion is the other ‘F’ word in my vocabulary,” she jokes. “My food is an evolution of who I am as a person, a chef, a mother, and of having lived in these two amazing places. It’s not fusion, it’s ever-evolving. The global cuisine that we have today happened because people evolved and embraced things they weren’t familiar with. It’s been happening since the beginning of time. I’m not the first person to do it and I won’t be the last.”

While the symmetry of Gomez’s two Souths is rooted in food, the similarities extend beyond ingredients. For example, upon moving to Georgia from New York in 2000, Gomez was caught off guard by the eye contact and general friendliness of her Publix cashier. “Coming from New York, where you’re lucky to get a smile, I remember thinking to myself, ‘Oh my gosh, this thing called Southern Hospitality — it’s real!’” Gomez recalls. “I came from a heritage that was all about hospitality, so that’s a kinship that both of my Souths have.” The source of this kinship, according to Gomez, lies in the fact that both regions are coastal and therefore have centuries of experience in receiving foreign visitors. “Because trade and commerce happened on the shores, they had to be welcoming, because people were always coming and going. So I think there’s a different sensibility in coastal regions around the world,” she explains.

At the heart of My Two Souths is Gomez’s refreshingly optimistic worldview: that different cultures tend to have more in common than expected. No recipe in the book posits this theory more effectively than Gomez’s Kerala Fried Chicken. When she first introduced this dish to Atlanta diners, people assumed it was an example of the chef’s Southern influences on display. However, Gomez had to explain that it was actually her mother’s recipe, which she grew up eating in Kerala several decades ago. “Every culture, no matter where in the world you go, has figured out that if you drench a bird in flour and deep-fry it, it’s probably gonna be good,” Gomez explains. If her mother’s fried chicken recipe is suggestive of a larger trend, then perhaps the similarities between cultures are indeed more numerous than the differences.

Readers of My Two Souths will notice many of Gomez’s Southern influences as the names behind some of Atlanta’s most acclaimed restaurants. The success of Steven Satterfield’s Miller Union and Linton Hopkins’ Holeman and Finch serves as proof that traditional Southern cooking has staked its claim in the world of fine dining. From Gomez’s point of view, Indian cuisine has yet to break through quite in the same way. But the emergence of immigrant chefs like herself, who are sharing their stories through food, plus the increasingly accepting and adventurous palette of American diners suggests that cultural cuisines like Gomez’s are on the verge of moving from niche to normal. “It’s really a beautiful time in American cuisine,” says Gomez. “Immigrant chefs are coming into their own, embracing their heritage, and the American palette is embracing it as well. Twenty years from now when my son is in his kitchen cooking up buttermilk biscuits with tellicherry black pepper or cornbread with cardamom in it, it won’t be so out of the norm.”