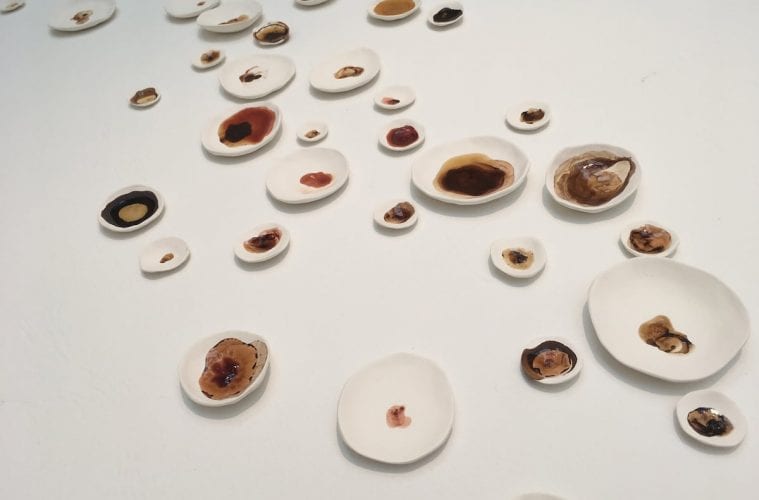 “The great force of History comes from the fact that we carry it within us, are unconsciously controlled by it in many ways, and History is literally present in all that we do.”  – James Baldwin

In the 19th century, Austrian anthropologist and ethnographer Felix von Luschan developed a color scale made up of 36 skin colors that were then used to determine race until the 1950s. Painted onto individual tiles, these colored tiles would be held up to an individual’s skin for comparison. Using this scale to figure out your skin tone may be useful when buying makeup, something that comes up often in a simple Google search, but extremely problematic when it comes to defining an individual’s race. Just as problematic as enlisting other methods and measurements of anthropometry in determining race are 19th-century anthropologist Francis Galton’s composite photographs meant to create representations of types, part of his research in eugenics. 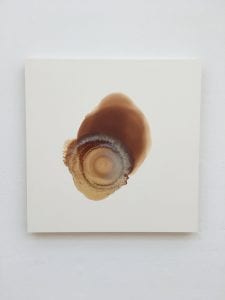 The show’s title, a brief excerpt drawn from James Baldwin’s 1965 essay for Ebony, “The White Man’s Guilt,” has the potential to lead us to the existential of white guilt without making it patently obvious. Romany’s “The great force of History comes from the fact that we carry it within us, are unconsciously controlled by it in many ways, and History is literally present in all that we do.” – James Baldwin subtly calls to white Americans. It’s hard to know in today’s world whether or not subtlety will be understood. However, keeping space open for nuance is crucial.

Baldwin’s essay is a meditation on “what white Americans talk about with one another” because “they do not, after all, seem to find very much to say to me,” which Baldwin concludes is because “they found the color of [his] skin inhibitory,” which is “a most disagreeable mirror, and a great deal of one’s energy is expended in reassuring white Americans that they do not see what they see” (Baldwin 1965, 47). The paragraph from which the show’s title starts is a call to white Americans to hear him:

“White man, hear me! History, as nearly no one seems to know, is not merely something to be read. And it does not refer merely, or even principally, to the past. On the contrary, the great force of history comes from the fact that we carry it within us, are unconsciously controlled by it in many ways, and history is literally present in all that we do. It could scarcely be otherwise since it is to history that we owe our frames of reference, our identities, and our aspirations. And it is with great pain and terror that one begins to realize this. In great pain and terror one begins to assess the history which has placed one where one is, and formed one’s point of view. In great pain and terror because, thereafter, one enters into battle with that historical creation, Oneself, and attempts to re-create oneself according to a principle more humane and more liberating: one begins the attempt to achieve a level of personal maturity and freedom which robs history of its tyrannical power, and also changes history” (Baldwin 1965, 47).

Romany’s call, on the other hand, requires us to look deeply and slowly at these paintings to discover it.

Romany takes these historical scientific methods, the technologies of the time, the chromatic scale, and creates a lovely show that at first glance comes across as simple abstraction. Considering the Swan Coach House Gallery exists partially because of wealth made from cotton, what does it mean for white folks to want to buy these works because of their beauty? (If it’s not already clear, I am white, and so am writing from the perspective of being white, looking at work about race.) But, this might be where the work challenges. It seems, within this context, that Romany is provoking us to say, “Do not blame me. I was not there. I did not do it. My history has nothing to do with Europe or the slave trade. Anyway, it was your chiefs who sold you to me. I was not present on the middle passage” (Baldwin 1965, 47). 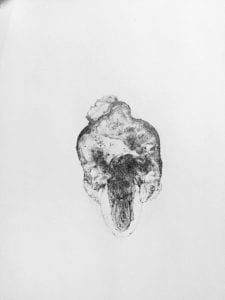 Romany’s paintings, oil on board, present as quasi-scientific representations. At times, these shiny surfaces seem to be photographs of cells made through microscopes — 12, 34, 29 (2016) comes across particularly as a cell. Others, present as cellular experimentations, upend any sort of neat and tidy biology — 12, 19, 27, 34, 36. The titles of these smaller works in oil are references to the colors Romany used from the 36 choices developed by von Luschan. The larger works, Centered (2016) and “The great force of History comes from the fact that we carry it within us, are unconsciously controlled by it in many ways, and History is literally present in all that we do.” – James Baldwin (2016), create a larger atmosphere and experience of difference. In Centered, the individual cells come together as a galaxy, whereas, in the title work, the viewer sees a smear of blood — this viewer saw it as menstrual blood, evocative of maternity and heredity.

The drawings, graphite on paper, are translations of Romany’s paintings into a different medium and are meant to be literal and figurative reductions of complex tonalities, shades and colors to black-and-white renderings. Aesthetically, I did not find these as pleasing or interesting, but maybe that is the point — to show the viewer that reducing complexity results in an ugly, boring, inaccurate and altogether incomplete picture.

The installation of the ceramic bowls holding paint is nice as a whole, but I can’t say that I found them particularly compelling. Accompanied by white gloves, the viewer could pick up and hold these objects. There is something compelling about physically engaging the work, holding these entities in your hand, but something about these objects and their installation felt too precious. This preciousness in a way contradicts the force of the show, the force of History that we carry with us in all of its violence and strife. But, if Romany is interested in evoking an impending sense of precarity, then these might tell a different story.

Ultimately, what this viewer took away from Romany’s exhibition is that the two curtains Baldwin describes are still very much so in effect — the “Iron Curtain” of color and the “curtain of guilt and lies behind which white Americans hide” (Baldwin 1965, 48) — and that only through confronting them through, in this case, shiny surfaces of swirling colors and textures, can we begin to lift the curtain.