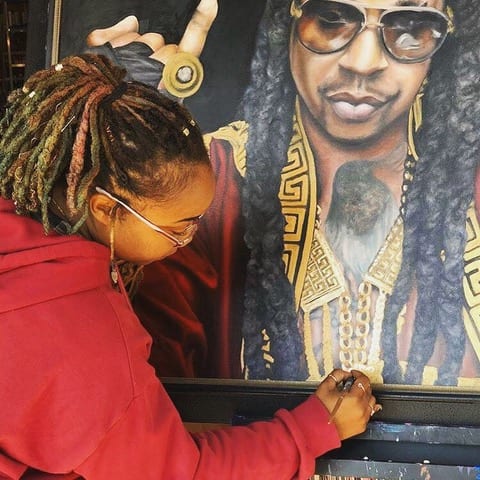 Atlanta painter Dizzy (aka Denisha Claxton) is one of two muralists working on a commission for Slim & Husky's Pizza Beeria in West Midtown. (Photos by @insamniyah)

For about the past four years, Atlanta painters Dizzy and Quake have produced large-scale art pieces around town, including a mural at the Hamilton E. Holmes MARTA station in northwest Atlanta.

They did the same thing for their three Nashville-area restaurants. Murals, they reason, give each space a specific vibe and match the city’s culture. That philosophy is playing out in the Dizzy and Quake project, in the space that was once filled by One Rooster Mongolian Grill and, before that, Real Chow Baby.

“The guys and I felt that Dizzy and Quake were the right artists to pay homage to Atlanta and bring both the beauty and the pain to life,” says Gray, Slim & Husky’s chief marketing officer.

Dizzy, a 25-year-old conceptual artist, takes cultural approaches to death using oil paint and sculpture. Quake, a 30-year-old illustrator, veers toward representational realism using charcoal and pastels. Most of his work focuses on inner representations of external struggles, especially his experiences as a black man in modern society.

Their Slim & Husky murals begin in the restrooms with a nod to authentic Southern ambiance. They plan to depict, in empowering ways, such legendary Atlanta artists as the rapper Big Rube and other members of the hip-hop/R&B/soul collective Dungeon Family. They also plan to dedicate a wall to a selection of lyrics from iconic hip-hop or R&B songs. The Slim & Husky’s acronym P.R.E.A.M. — Pizza Rules Everything Around Me — is another inspiration.

“My vision for it is Atlanta,” says Dizzy, real name Denisha Claxton. “We have to make it nostalgic.” She and Quake (real name Michael Edwards) say they’re both influenced by such painters as Italy’s Caravaggio and Artemisia Gentileschi and the Netherlands’ Hieronymus Bosch.