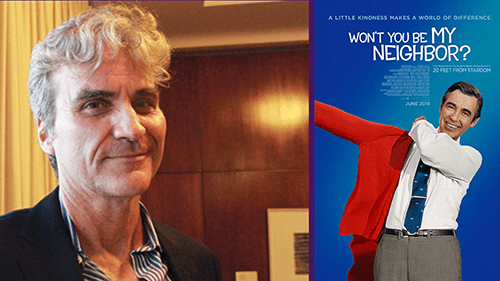 Tom Junod's 1998 profile of Fred Rogers for Esquire magazine became the basis for the new movie "A Beautiful Day in the Neighborhood," with Tom Hanks as Rogers. This poster here is from a 2018 documentary about the children's-TV celebrity.

When his editor at Esquire magazine asked journalist Tom Junod to do a 1998 profile of Fred Rogers, the writer had no idea the assignment would change his life and lead to an unexpected friendship.

That meeting and subsequent interviews are the basis of the new movie A Beautiful Day in the Neighborhood, opening Friday, November 22, in Atlanta. Tom Hanks plays Rogers, with Matthew Rhys of The Americans as Junod’s alter ego, Lloyd Vogel. As the film opens, Lloyd has just had an altercation with his father and is in a bad place personally and professionally. He lands the Rogers interview because no other potential story subjects will talk to him. 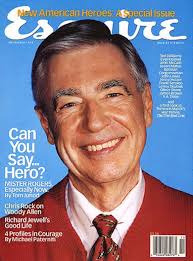 When screenwriters Micah Fitzerman-Blue and Noah Harpster contacted Junod — now 61, living in Marietta and most recently a senior writer for ESPN — they told him exactly how they’d proceed. They saw the film as an episode of Mister Rogers’ Neighborhood for adults, where Rogers would initially speak to the audience and break the fourth wall. As written, Lloyd is a far cry from Junod. “I couldn’t help but notice that the details of his life differed significantly from mine,” Junod says. “That is why I asked them to change my name. I think the script became stronger for that. Once they did that, they weren’t stranded in the middle of nowhere between fact and fiction. They were able to push it a bit farther.”

Junod expected Rogers to be nice at their first meeting, but he didn’t realize the Presbyterian minister would be so genuine and that the gig would become a consuming experience. Rogers had no dark side. “I thought he would be deferential and passive,” Junod recalls. “Yet his kindness was not passive at all. It was active, and he engaged people, including me, on a direct and upfront level. Fred and Mister Rogers — they were the same person. What you see in the movie is very accurate and very true to him — the level of discipline that he brought to not just his craft on the show but his engagements with people and the hard work.”

The men met first in New York, and Junod later spent a week in Pittsburgh on the set of the TV series (1968–2001). They drove together to Latrobe, Pennsylvania — where Rogers was born — to see his parents’ tomb. “I saw a wide spectrum of his life, and when the story came out, we remained friends until he died in 2003.” (Read Junod’s Esquire piece on Rogers HERE.) 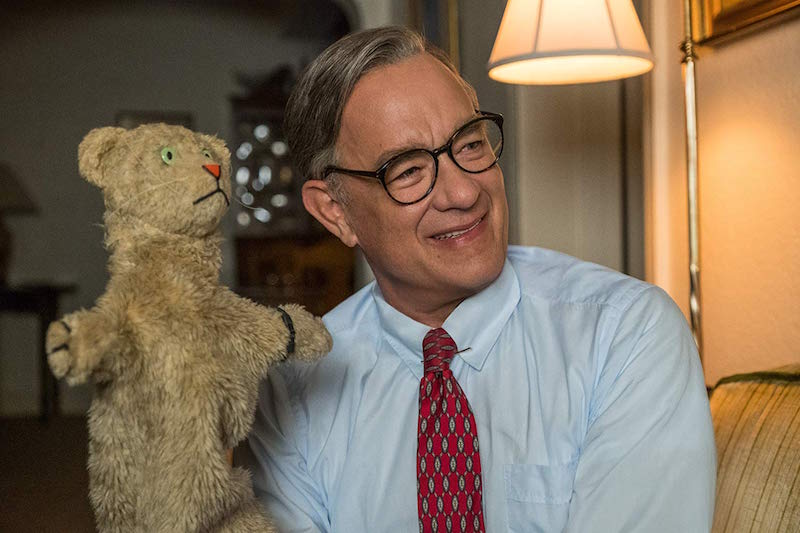 Tom Hanks as Mister Rogers, with Daniel Striped Tiger, in “It’s a Beautiful Day in the Neighborhood,” opening Friday in metro Atlanta (Photo by Lacey Terrell)

When Rogers died of cancer at age 74, Junod eulogized him. “People were always amazed when I said that Fred and I had stayed in touch after my story,” he said, “that we spoke on the phone a couple of times a year and that Fred had written me well over 100 e-mails — but once you entered into Fred’s life, well, there was no doubt that he would enter into yours.”

Junod and Rhys talked before A Beautiful Day in the Neighborhood was shot, and the writer — who has two National Magazine awards, the most prestigious award in magazine writing — was amazed when he saw the film over the summer and how Rhys had duplicated his mannerisms. “‘Oh, my God, it’s me,” he says he thought. “It was quite a surprise, and moving.”

Junod was on the set frequently but says he didn’t always understand what director Marielle Heller was doing. “I was scratching my head half the time, but once I saw it I knew what she was doing. I learned what a director does. It’s all there. It’s an unlikely movie, unusual, unique. It’s character-driven, and the pacing is deliberately slow. Cameras shoot unremitting close-ups. It’s like Fred’s gaze. He asked you a question and looked at you until you answered it. The camera is like that here.” 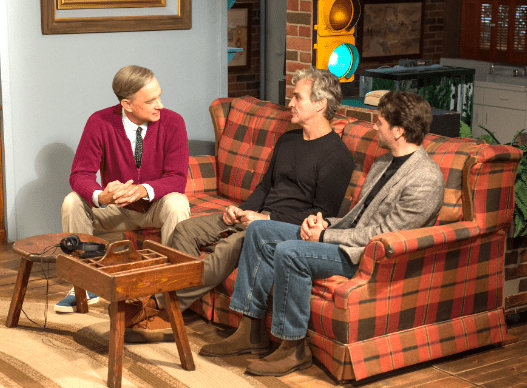 Junod says he was relieved when he learned that Hanks was attached to the project. “I know a lot of people who sell options to Hollywood,” he says, “and they go nowhere. When Tom was cast, I realized the movie was going to get made. The minute he got the role it seemed like he was the only person who could play the role. Matthew carries the movie in a lot of ways, but Tom sets the tone. He plays Fred in a way that reveals the essence of the man.”

The experience with Rogers subtley changed his perspective as a writer, says Junod, who’s taking a break from ESPN to finish a book about his philandering father, Lou. “I think that Fred was out to find the good in me so that I could understand for myself that there was goodness there.”

“At a time when I worried about my trustworthiness, he trusted me. It was this amazing gift. In general, if you look at the work I do now, it did change. He made goodness interesting. I thought goodness was bland and dull, but he made it as interesting a proposition as badness. I didn’t change exactly the way I write, but Fred had some ideas about journalism and journalists that he was trying to get across without telling me. That is the interesting thing — he was trying to get things out beyond words that weren’t specific, but I understand them very specifically.”