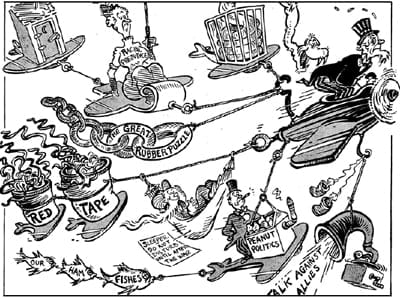 We know Theodor Seuss Geisel as Dr. Seuss, creator of children’s books beloved for their rhymes, fanciful creatures and madcap stories. “Dr. Seuss Goes to War … and More,” an exhibition at the William Breman Museum through August 31, shines a light on Geisel the political cartoonist.

Propelled by the events running up to World War II, Geisel expressed his outrage through his pen. He was in the vanguard against American isolationism. He spoke out against it and against anti-Semitism and warned of the dangers of Hitler’s regime in more than 400 political cartoons published in the New York newspaper PM.

The genie never returned to the bottle. The exhibit shows how his social conscience, and even some of his imagery, found its way into the pages of his children’s books — his versions of Aesop’s Fables, populated with Sneetches and Loraxes and Yertle the Turtle.

Assuming that it takes one to know one, we asked Pulitzer Prize-winning Atlanta Journal-Constitution cartoonist Mike Luckovich for his thoughts about Seuss. Luckovich will speak about his own work at the Breman at 2 p.m. Sunday, June 27.

Catherine Fox: What were Dr. Seuss’ strengths as a political cartoonist?

Mike Luckovich: Just like his children’s book illustrations, his drawings are so fun-looking and disarming that you pay attention to them, you want to study them. Then you’re surprised by the strength of the message.

CF: Are there any precedents for his distinctive style?

ML: I don’t know if there are precedents to his style. It’s so goofily original. And I mean that as a compliment. Many editorial cartoonists in the ’40s had styles that were more rigid. They didn’t have his fluid line.

CF: Did you read Dr. Seuss books to your children? Do you think they are too preachy for today’s media-savvy kids?

ML: I do read Dr. Seuss to my kids, which they find very odd, considering they’re in their 20s. Actually, we do have one who’s nine, and a few years ago, before she was reading on her own, we read them to her (and all her siblings when they were younger). I don’t think they’re too preachy for today’s kids. His rhyming is so imaginative, and the great drawings, I think, guarantee that kids will always be interested in his books.

CF: Have you ever thought about doing children’s books?

ML: I have thought about children’s books. My weird sense of humor and drawing style might be a hit with kids, or maybe it would just repel them. I’m definitely going to write a kids’ book sometime.