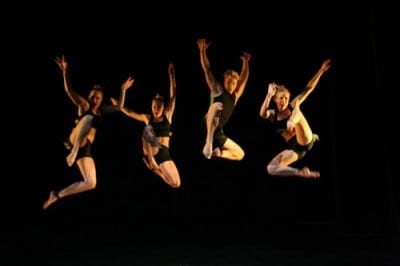 It takes several months to prepare fewer than seven minutes of choreography in Bala Sarasvati’s “Coeur de CORE.” Still, young dancers at the University of Georgia have asked to perform it year after year. This Thursday through Saturday, UGA’s CORE Concert Dance Company will present the contemporary dance quartet in the Zoetic Dance Exchange Choreographers’ Showcase at Atlanta’s 7 Stages Theater.

In recent years, Sarasvati, a UGA professor, has given few performances in Atlanta, focusing instead on concerts in Athens and at national and international dance events. But her influence on the Atlanta dance community has remained strong through the artists she has trained, who include Matt Kent, Emily Milam Kent, Beth Lewis and Blake Dalton. On the success of an alumni concert at UGA in February, and following her participation in the Wormhole Project’s choreographic workshop in May, Sarasvati told me that it was time to branch into Atlanta again.

Sarasvati’s return sits well with Zoetic’s mission to bring members of the local dance community together. In its second year, the Choreographers’ Showcase will also include the premiere of Daryl Foster’s “4 Out of 5,” Beth Lewis’ “Stand Alone” and two works created under Wormhole Project mentoring programs: Lewis’ “The Daily” and Amanda Thompson’s “One Foot on the Ground.” Students from the exchange’s two-week workshop will perform excerpts from repertory by T. Lang, Terry Slade and Bubba Carr. A film by Mallory Baxley will give a behind-the-scenes view of choreographic processes leading up to the performance.

UGA students have performed “Coeur de CORE” (top and bottom photos) nearly every year since its 2006 premiere, despite the rigorous rehearsals it requires. The reason is simple: It’s empowering. As they practice, the dancers grow physically adept and personally strong, Sarasvati said. Extensive level changes — quick movements that rise from the floor to high levels, shooting upward at angles, off of the body’s vertical line of gravity — require deep muscular strength and precision.

Accompanied by percussion, “Coeur de CORE” draws inspiration from its title, meaning “heart to core,” and draws cultural influences from the Coeur D’Alene and Nez Perce Indians of the Pacific Northwest, where Sarasvati grew up. She also found inspiration in the Navajo Indian notion of shape-shifting. This ties in with Sarasvati’s knowledge of Rudolf Laban’s Effort ideas, where specific images help distinguish a person’s expressive range of movement qualities, or dynamics.

The Navajos use imagery, such as putting oneself behind the eyes of a particular animal, to “connect physicality and spirit” and “to create and change the energy of the body,” Sarasvati explained. “But the dancers aren’t trying to enact anything, culturally, except for notions about being inside themselves, being very strong and empowered as they move, and being able to take in the environment.”

This will be the third cast of dancers to perform the quartet, which was selected for the 2006 National American College Dance Festival at the Kennedy Center in Washington. In 2008, “Coeur de CORE” was chosen for the Choreographic Center International Concert in Rio de Janeiro, Brazil. And next month, CORE Concert Dance Company will perform the piece at the World Dance Alliance Global Conference at the Dance Theater Workshop in New York City.