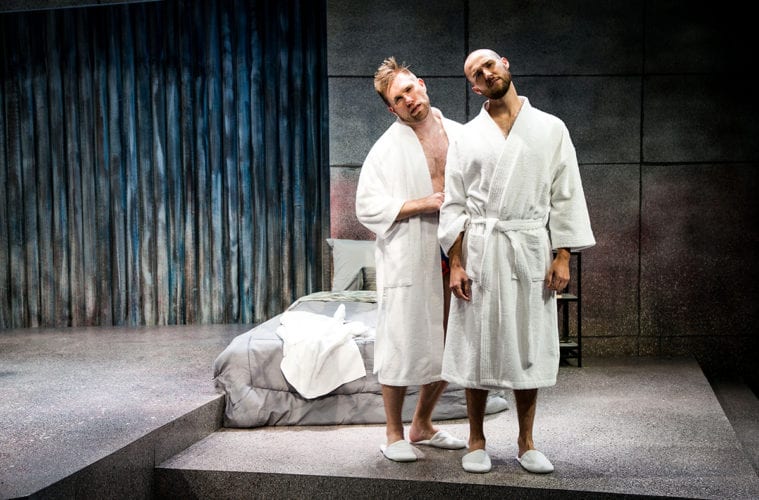 Before working on any show, Michael Vine asks himself what he calls his Peace Corps question: “Why am I doing this play, instead of joining the Peace Corps for the next two months of my life? Why is this play important, and how can I serve other people with this play?” If he can’t come up with an answer, he can’t do the play.

Between his manifold duties as education manager at Georgia Ensemble Theatre (GET) in Roswell, his producer credit at Shakespeare on Draught and acting and directing across Atlanta, Vine gets the chance to ask himself that question pretty often. “I feel unreasonably lucky,” says Vine, “to be put in [this] position . . . it’s a really wonderful thing to be an artist all the time.”

Vine is a graduate of the University of Alabama with a bachelor’s degree in communications and a double major in public relations and theater. From there, he lived in Abingdon, Virginia, appearing in over 20 productions at the Tony Award-winning Barter Theatre. “It completely shaped who I am as an artist,” says Vine, “and who I am as a person. I couldn’t be who or where I am today if not for the people at Barter Theatre.” What started as a six-month lease in Atlanta became two years working in theaters across the city within a wide range of capacities. Recently, he was in Actor’s Express’ production of Reykjavik, playing characters ranging from a supernatural rent boy’s long-suffering client to one half of a serial killing duo. Additionally, he has worked at the Alliance, Marietta’s New Theatre in the Square and Shakespeare Tavern Playhouse. He is a producer and frequent performer in Shakespeare on Draught, a company that puts on semi-interactive productions of Shakespeare plays in the parking lot of Orpheus Brewing Company.

Vine cites Atlanta’s proximity to his alma mater — and the resulting accessibility to his college football team of choice — as a reason for continuing his career here. But the big draw is the theater community itself, which, in Vine’s experience, has a tendency to emphasize collaboration over cut-throat competition. “It is a group of people,” says Vine, “that seeks first to uplift, and not to compete.”

As education manager at GET, Vine oversees and supervises teachers at the conservatory — GET offers classes for anyone between ages five and adulthood. He also helps run the various summer camps offered at the theater and hires and manages the apprentice company. It is with the apprentices’ help that Vine carries out what he believes to be his most important job of all: managing and running the Theatre for Young Audiences tour.

GET has a healthy Theatre for Young Audiences program, including a season that tours popular shows at schools in and around Atlanta. The apprentice company, which consists of a stage manager and six actors, four of whom are acting apprentices with GET, performs more than 150 times a season, for up to 35,000 kids and adults. Vine’s own introduction to theater happened when he was young, sitting in the audience of Disney’s Beauty and the Beast. Specifically, the catalytic moment was the climactic transformation of the Beast back into the Prince.

“Watching the beast rise above the stage . . . he spun in so many different directions. I was like, ‘He’s actually flying. There’s no way he’s connected to a thing. This is literal magic that I’m seeing before my eyes.’ The journey and the mission to try and create that [feeling] for other people is a really, really cool thing.”

Vine encourages the apprentices under his direction to undertake that same mission. He recounts a performance of the Theatre for Young Audiences tour’s production of Junie B. Jones, which the company performed at a bilingual, Spanish-English elementary school. Dayanari Umaña, the actress playing Junie, speaks Spanish and wanted to perform Junie’s asides to the audience in Spanish. Vine and the cast agreed. After the show, Umaña and her costars received a flood of enraptured comments from the students: “I love the Junie B. Jones books, but I never thought I’d see a Junie B. Jones who looks like me.”