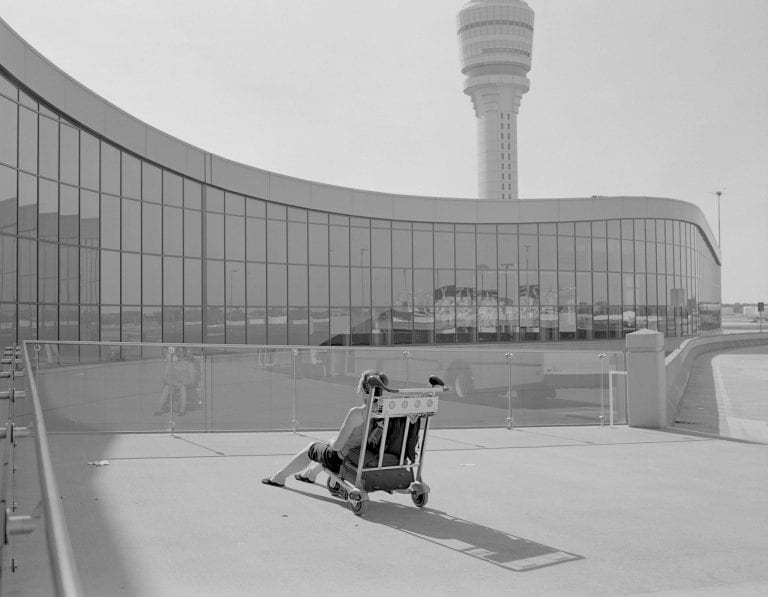 All photos untitled (Courtesy of the artist and Jackson Fine Art)

As part of its Picturing the South series of commissions, the High Museum of Art recently asked acclaimed photographer Mark Steinmetz to turn his lens on the American South. The resulting exhibition Mark Steinmetz: Terminus runs from March 3 to June 3. ArtsATL reached out to Steinmetz to talk about his decision to focus on Atlanta’s Hartsfield-Jackson International airport.

ArtsATL: I am curious to learn why you picked the airport. Obviously the airport has been central to the rise of Atlanta as a major US city and a “global metropolis,” but it could have been many other places in and around Atlanta.

Steinmetz: The airport environment is unique; it’s unlike other places in Atlanta. My reasons for photographing there had very little to do with Atlanta’s rise as a global city. Perhaps I could have gone to a train station or a bus station but air travel strikes me as more modern, and the scale of the airport is vast in comparison. I wanted to show passengers, people on a journey. 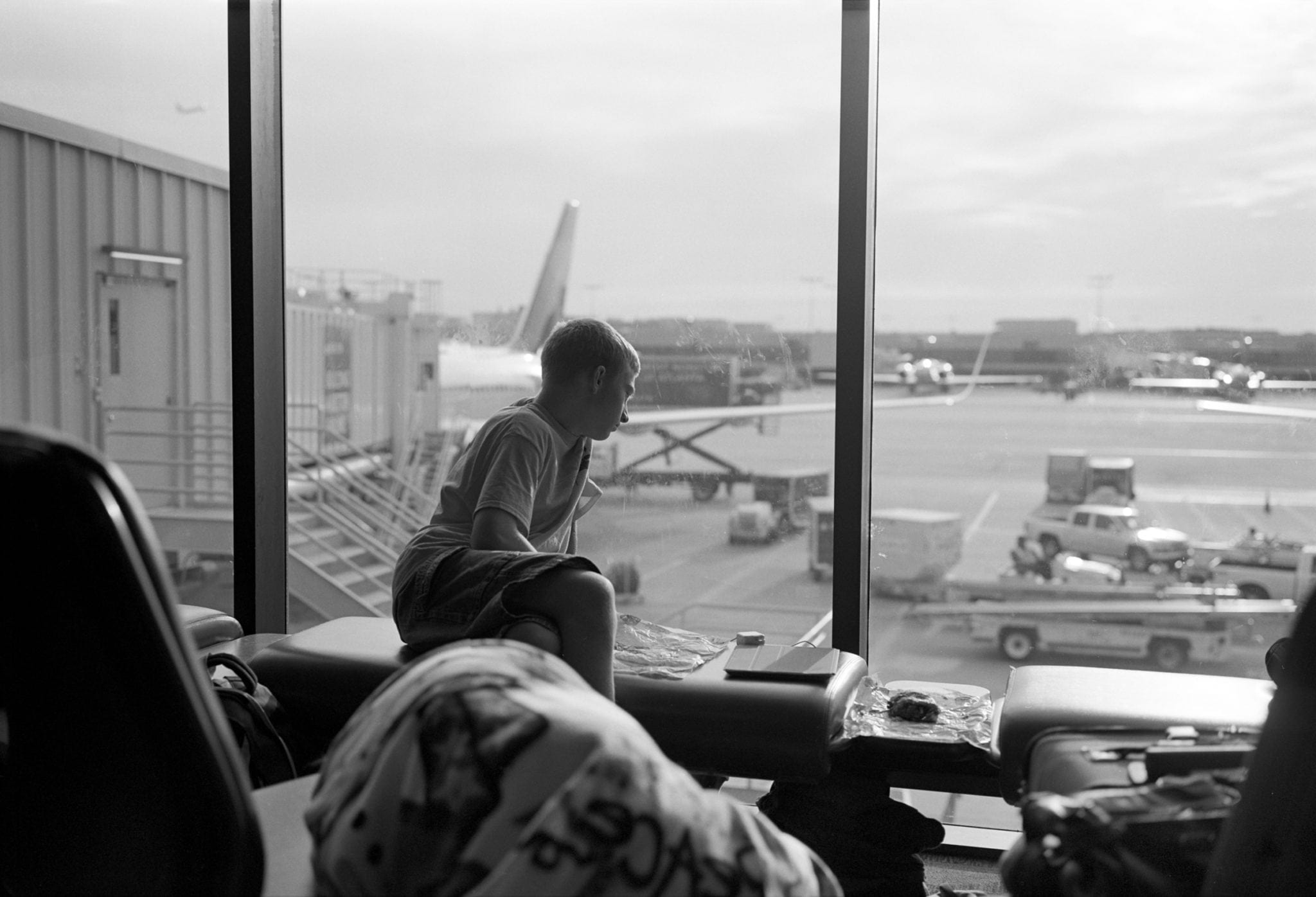 ArtsATL: What was your process in engaging in this project, and how much time did you have to complete the work?

Steinmetz: Brett Abbott [former photography curator] of the High approached me about possibly participating in a Picturing the South commission several years ago. It took a couple years before it was finally approved, but I began photographing somewhat at the airport in anticipation of the commission. I’ve long held an interest in the airport and have some photos of it from back in the early 90s. In those days, before September 11 changed everything, people could park on the roadways close to the airport and watch the planes while picnicking on their cars.

Since I live in Athens, which is a little far away, I would stay on occasion at hotels around the airport and typically photograph in the evenings and mornings. I’ve been traveling a lot the last several years, and whenever I had a flight I would arrive early to give myself time to wander the terminals. Sometimes I would pick up a friend at the airport and again would get there generously early. 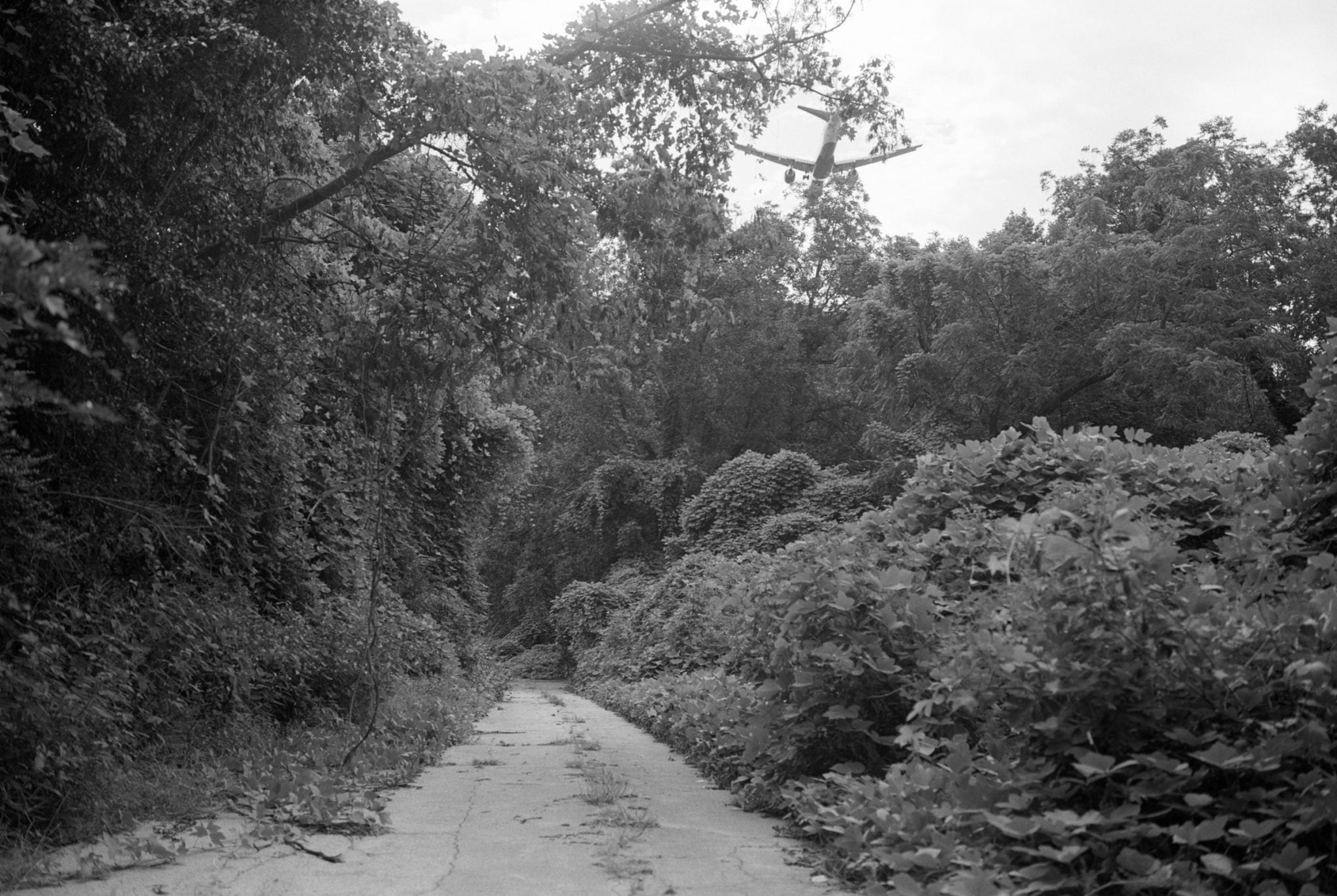 ArtsATL: I am also curious about some of the images you took outside of the airport. (I am thinking about the one from a roadway invaded with kudzu.) How far from the airport did you allow your project to go?

Steinmetz: I might have a few jet trail photos from Athens in the show and some photos where the planes appear small in dramatic skies over Conyers. There are semi-abandoned areas quite close to the airport that might one day be redeveloped.

ArtsATL: Did you have any interest in capturing the surrounding towns and the impact that it’s had on the city’s southside?

Steinmetz: I went to nearby towns like College Park or Hapeville, not really to explore the impact of the airport on those communities but more to search for the unexpected, the beautiful or the surreal. There’s something about a plane flying low over a landscape (natural or man-made) that I always find exciting. 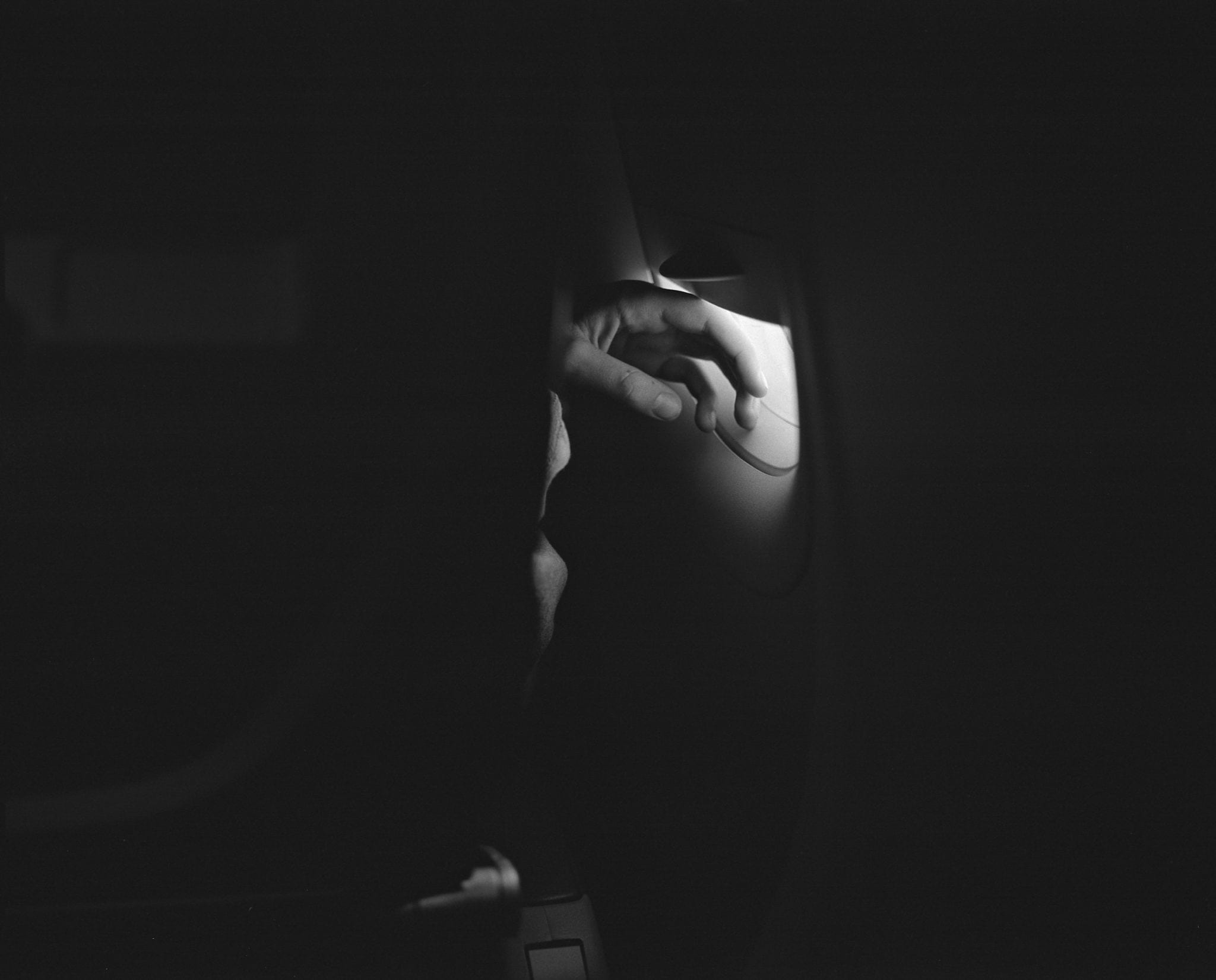 ArtsATL: You brought different perspectives to the project: portraiture, landscape and even abstract, long-exposure shots of the sky and flight. Why did you think it was important to work that way?

Steinmetz: I was interested in weaving together overlapping perspectives. There might be a photo of a passenger waiting at the airport in some sort of very specific, yet perfectly mundane situation along with more abstracted images of jet trails or tiny planes against clouds. I wanted to look up at the planes from the ground as well as look down at the ground from the planes. I wanted to describe the predicament of a traveler in the midst of a journey as well as record what it looks like when a wing moves through a cloud. Having that sort of range in the same body of work is intriguing to me. 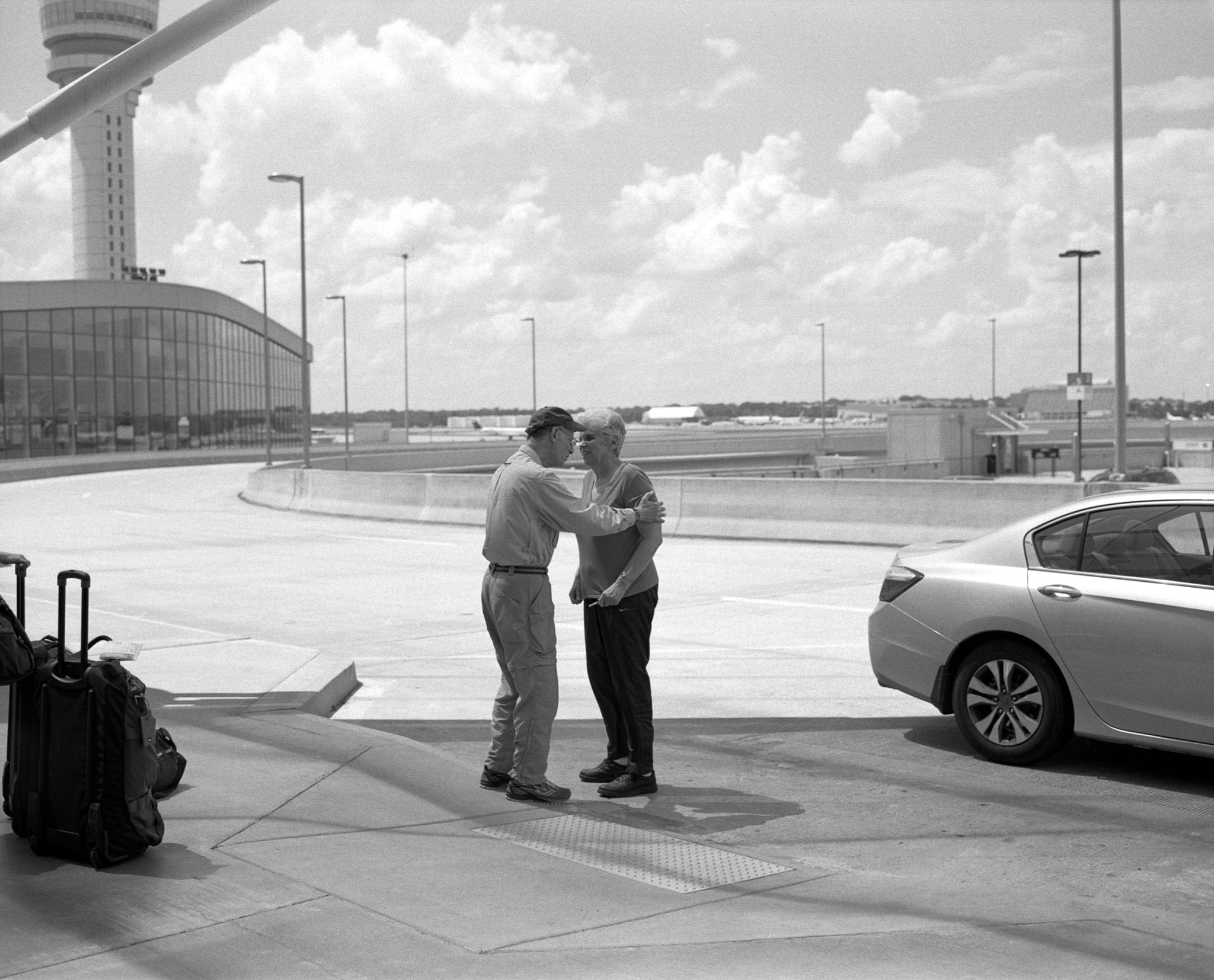 ArtsATL: What did the subjects make of having their pictures taken? Did you interact with them at all?

Steinmetz: In some cases, I talked to the subjects and asked them to stay natural, and in other cases, I photographed them discreetly. Nobody seemed to mind. Everybody there is preoccupied but also on a sort of hiatus from their normal lives. Typically I was traveling, too, and had a suitcase with me, so I fit right in.

ArtsATL: You often talk about the need to accept ambiguity in your work and to allow the outcome of a project to unfold naturally (as opposed to deciding too soon what it will look like). Did you work with that state of mind for this particular project?

Steinmetz: Yes, you might start out with some ideas, but as a photographer you really have to work with what actually falls into your path. The world is more interesting than any of our thoughts or beliefs about it. I knew I wanted to have some photographs of pilots and stewardesses as well as the passengers with their suitcases (the central characters in the work), but aside from that I tried to stay open to whatever turned up. 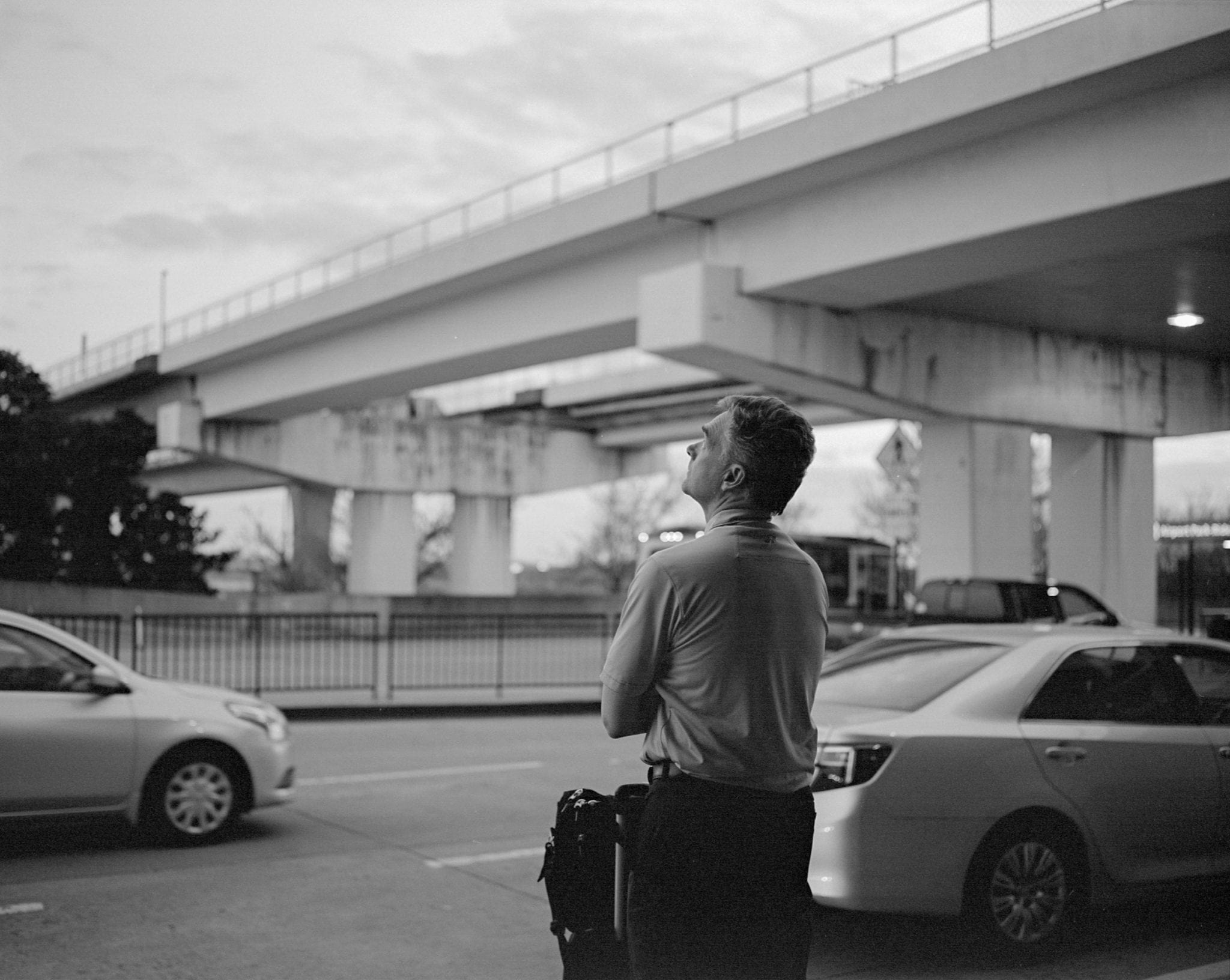 ArtsATL: What would you like the viewer to take away from your images and the way you “pictured” the airport?

Steinmetz: I hope viewers will, at least in a small way, come away feeling that our shared familiar world is one full of life, surprise and meaningful drama. The airport is a stage for great theater; beauty is not rare.